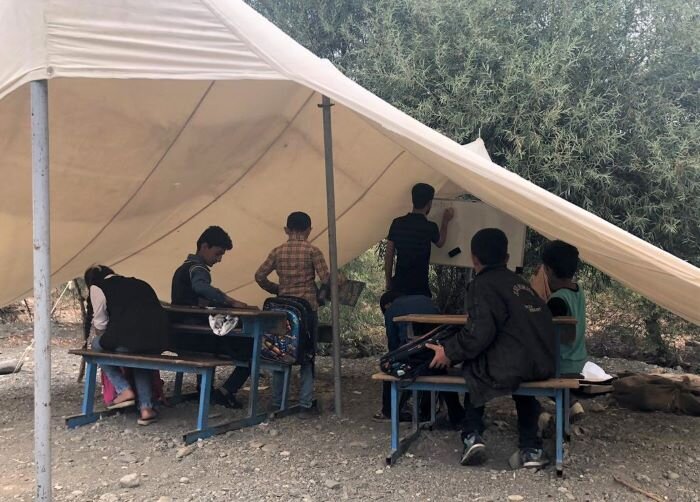 Displaced students from Zewka try to keep up with their studies in desperate conditions.

“If we go back, we will be bombed; if we stay here, we will be flooded,” Pur Aish [Auntie]  told members of the CPT Iraqi Kurdistan. “What kind of choice is that? What did we do?” she asked. She was speaking about her village, Zewka, near the Iranian border, after the whole village was displaced by Turkish bombing. 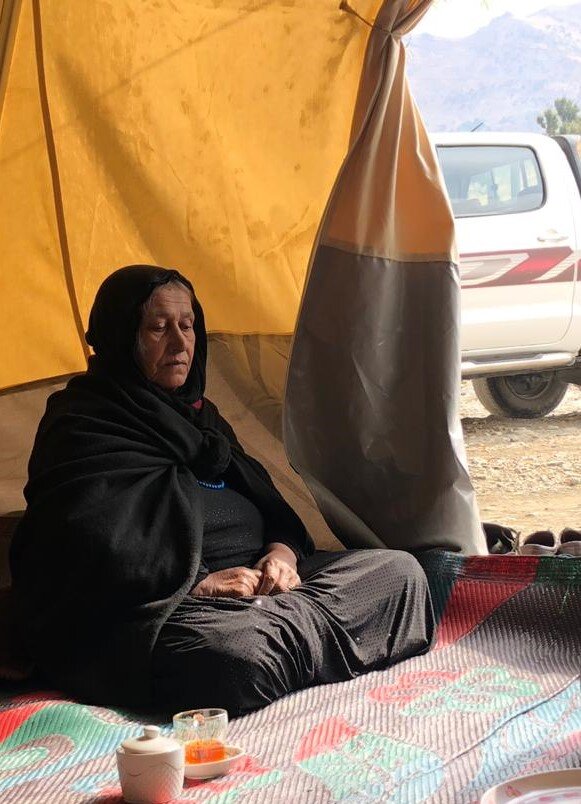 The warplanes and drones of the Turkish Air Force bombed Zewka 24 times overnight on 26 September. The next morning all 20 families—about 100 children, women, and men—fled from their village down the mountain with only the belongings they could carry.

This attack was the third time Zewka has been displaced by bombardment since 2011. But it was the first time Turkey has bombed them.  Zewka lies near an Iranian military outpost on the Iraqi Kurdistan side of the mountain. Previously they have been bombarded by the Iranian military.

A displaced village also means a displaced school.  Organizations have provided two small tents, three white boards, and nine desks for the children’s school. The students receive instruction under the flimsy canvas or at desks by the river. Any rain means school is cancelled and they must stay home.

Team members, Kamaran Osman and Weldon Nisly visited the village on 19 October. They met teacher Awat, the Zewka school headmaster, in the city of Qaladze, who rode with them to the displaced village and school.

Due to lack of space, two girls from Zewka sit
at a desk outside, near the river that will soon flood

The school’s four teachers, including teacher Awat, live in Qaladze and drive the hour-long trip over the mountain early each morning in time for school to begin at 8:00 a.m. At noon the classes end and the teachers begin the tiring journey home again.

The teachers spend most of their meager salary on transportation to and from the camp. They pooled their money to purchase a 1980s-model four-wheel-drive Toyota to drive across the mountain in all but the worst weather. They know that if they do not show up, the children will not have school. “I am coming here to teach because I love these students,” one teacher said. The other teachers echoed his sentiment. They all vowed to continue teaching the children in this makeshift school.

“How is it possible for these children to learn in this life-threatening situation?”

The teachers emphasized how hard it is for children to learn when they are traumatized by bombings and displacement. “How is it possible for these children to learn in this life-threatening situation?” Teacher Pishdar asked CPT. Another teacher said, “The children of Zewka need a safe and stable school with adequate resources so they can get the education they deserve.”

Water is another significant concern for the displaced village. Their primary source of water is the river, which is polluted with human and animal waste. They drink the river water and use it to cook, wash dishes and clothes, and bathe their children. Their children often play in the river and are suffering from skin rashes and diseases.

Zewka village calls on Turkey to stop bombing. They also call upon their own government and international humanitarian agencies to provide aid so they no longer face the terrible choice of facing bombs or floods.

CPT echoes the concerns of Zewka’s people, calling on the international community to tell Turkey to stop bombing them and all others who suffer the ravages of war.

CPTers Kamaran and Weldon stand with the students and staff
of the displaced village school.