CPT-Palestine is building partnerships to transform violence and oppression. We support Palestinian-led, nonviolent, grassroots resistance against the Israeli Occupation, through solidarity and advocacy with Palestinians living in the H2 area of Al-Khalil/Hebron city, and south Hebron Hills.

Why is CPT in Al-Khalil/Hebron

CPT was invited by the municipality of Al-Khalil/Hebron after a CPT delegation visited the city in 1994, following the Ibrahimi Mosque massacre. In 1995, the first official CPT team was established in the Old City of Hebron. The plan was to accompany the community for six months until the situation stabilized and Shuhada Street opened once again. But unfortunately, the occupation and its violations continued.

As CPT is a partner-led organization, our partners in the community assured the need for CPT to remain in Al-Khalil/Hebron to document and be in solidarity with the community.

If You Can Forget

This project’s aim is to document the collective memory and oral history from people who have lived in the Old City within the H2 area. We highlight physical buildings as concrete examples of occupation and we focus on participant’s memories of these spaces that have been affected or changed under occupation. It is a project that brings stories to life from unique places in the Old City of Al-Khalil/Hebron. In every episode we breath life into a place with memories that are being stolen through occupation. We are trying to save our history.

Watch the Stories Within Stones

We are a movement of Palestinians from different backgrounds, working for justice and equality for Palestine. We seek to create a Palestinian community that is able and ready to provide frameworks for multi-racial, multi-ethinic, multi-faith anti-oppressions work that is centered in the liberation of our local and global community.

Another aspect of CPT work is to observe the situation at the checkpoints while children cross on their way to school. We report on incidents of human rights violations which we publish for our partners like the United Nations, Save The Children among others, in order to address the systematic violence and guarantee safety for children and their right to education and freedom of movement.

This mentorship project uses photography to help children and teens express their thoughts, ideas and their way of thinking through by offering a space for them to freely express themselves. These children bring us on journeys of their lives and concerns through imagery, storytelling, and media channels.

Every month we publish a newsletter including articles and photo essays that describe the current situation in the Old City.

Al-Khalil\Hebron is the largest city in the West Bank, and second largest in Palestine after Gaza. Al-Khalil\Hebron was administered by England as part of the British Mandate of Palestine (1920–1948), and then controlled by Jordan after the first of the Arab-Israeli wars in 1948–1949.

Following the Six-Day War of June 1967, Al-Khalil/Hebron was part of the West Bank territory that came under Israeli occupation. In the wake of the 1995 Oslo Agreement and subsequent 1997 Hebron Agreement, Al-Khalil\Hebron was split into two sectors: H1 which is controlled by the Palestinian Authority and H2 (including the Old City of Al-Khalil\Hebron) remained under the military control of Israel.

According to al-Haq, an independent Palestinian human rights organization, there are at least 35,000 Palestinians and more than 600 Israeli settlers residing in H2. Settlers in this area are protected by approximately 2,000 Israeli soldiers, while Palestinian movement within the area is restricted by Israeli checkpoints. There are two main factors that have led to a decline in Palestinian presence in the area: Israel’s closure of main commercial and residential streets and businesses leading to harsh and restrictive life conditions imposed on Palestinians, and the continuous harassment and assault of Palestinians by settlers and soldiers in the area.

Palestine is a small region of land that has played a prominent role in the ancient and modern history of the Middle East. The history of Palestine has been marked by frequent political conflict and violent land seizures because of its importance to several major world religions, and because Palestine sits at a valuable geopolitical crossroads between Africa and Asia. Today, Arab people who call this territory home are known as Palestinians, and the people of Palestine have a strong desire to create a free and independent state in this contested region of the world.

The Partition of Palestine

Scholars believe that the name “Palestine” originally comes from the word “Philistia,” which refers to the Philistines who conquered part of the region in the 12th century BC.

Throughout history, Palestine has been ruled by numerous groups, including the Assyrians, Babylonians, Persians, Greeks, Romans, Arabs, Fatimids, Seljuk Turks, Crusaders, Egyptians, and Mamluks. From about 1517 to 1917, the region was ruled by the Ottoman Empire.

When World War I ended in 1918, the British took control of Palestine. The League of Nations issued a British Mandate for Palestine: a document that granted Britain administrative control over the region effective in 1923 which included provisions for the creation of a national home for Jews in Palestine (the Balfour Declaration).

In May 1948, less than a year after the United Nations Partition Plan for Palestine was introduced, Britain withdrew from Palestine and Israel declared itself an independent state, implying a willingness to implement the Partition Plan.

Almost immediately, neighbouring Arab armies moved in to prevent the establishment of the Israeli state. The 1948 Arab-Israeli War that ensued involved Israel and five Arab nations: Jordan, Iraq, Syria, Egypt and Lebanon. By the war’s end in July 1949, Israel controlled more than two-thirds of the former British Mandate, while Jordan took control of the West Bank, and Egypt took control over the Gaza Strip.

The 1967 War, also known in Syria and Jordan as the June setback, was the war that broke out between Israel and Egypt, Syria, and Jordan from 5-10 June 1967, leading to Israel’s occupation of the Sinai, the Gaza Strip, the West Bank and the Golan.

The Palestinian people did not accept or remain silent while Israel occupied their land. Palestinians expressed their anger through many means, one of which was the uprisings calling for resistance.

It received its name because resistance fighters used stones as the means of attack and defense against the Israeli army. Their children were also known as children of stones. The intifada grew out of popular Palestinian spontaneous protest against the poor living conditions in the camps, widespread unemployment, insulting national sentiment, and the daily oppression practiced by the Israeli occupation authorities against the Palestinian population. The Oslo Accords were signed as a result of this intifada, a peace agreement between Israel and the Palestine Liberation Organization.

The second Palestinian uprising began after Ariel Sharon, then leader of the Israeli opposition party, stormed the courtyards of the Al-Aqsa Mosque on 28 September 2000, under the protection of about two thousand soldiers and special forces, and with the approval of then-Prime Minister Ehud Barak. Clashes took place between worshippers and the occupation forces.

Later, the city of Jerusalem witnessed violent confrontations, resulting in the injury and deaths of thousands of Israelis and Palestinians, and protests quickly spread to all cities in the West Bank and Gaza Strip. The results of this uprising included the armistice agreement held at the Sharm el-Sheikh summit, which brought together the Palestinian Authority leader Mahmoud Abbas and the Israeli Prime Minister Ariel Sharon.

Also known as the Intifada of Knives, this most recent uprising is a wave of protests that have been taking place in the West Bank, Gaza Strip and Israel since the beginning of October 2015 until now. It has been marked by Palestinians’ repeated stabbings of Israeli soldiers and settlers, as well as Israeli Jews stabbing Palestinians, and extrajudicial executions of Palestinians under the pretext of their attempt to carry out stabbing attacks. The events also coincided with the implementation of Israeli air strikes on the Gaza Strip, from which rockets were launched towards Israel. 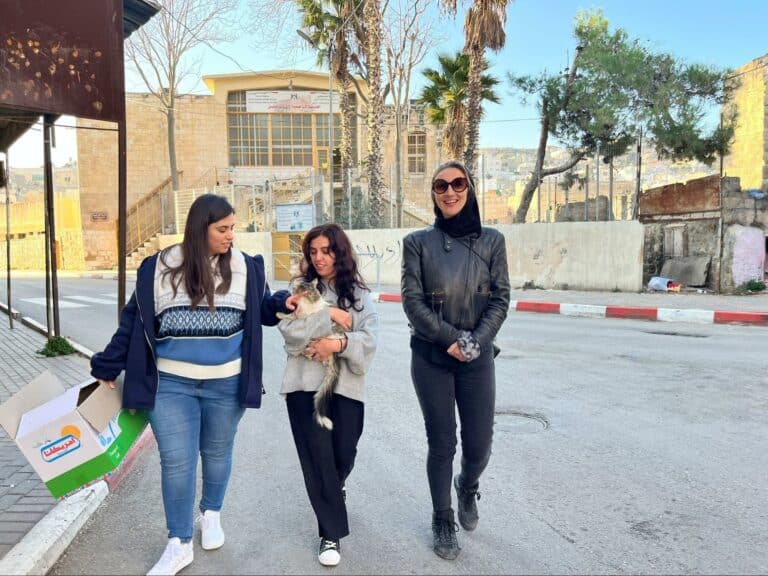 Our humanity is integral

How can we think about one problem and forget the other, or how can our humanity include one thing and exclude the other? 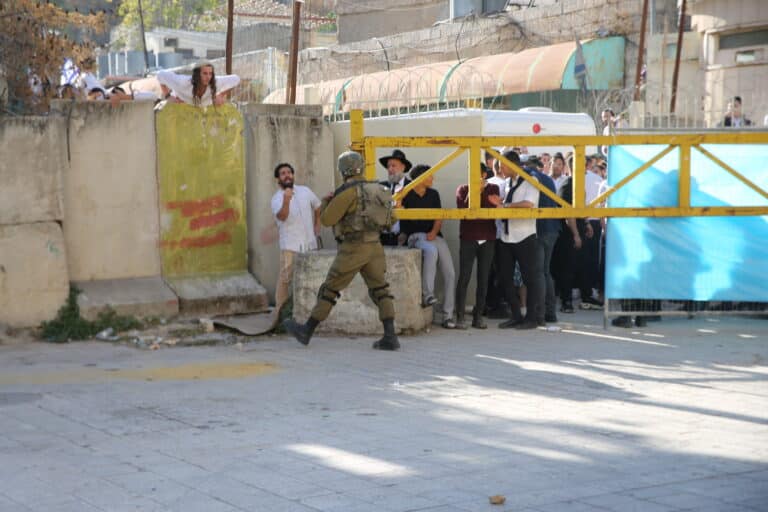 Jewish holidays in Al Khalil/Hebron have become synonymous with abuse at the hands of settlers and soldiers. 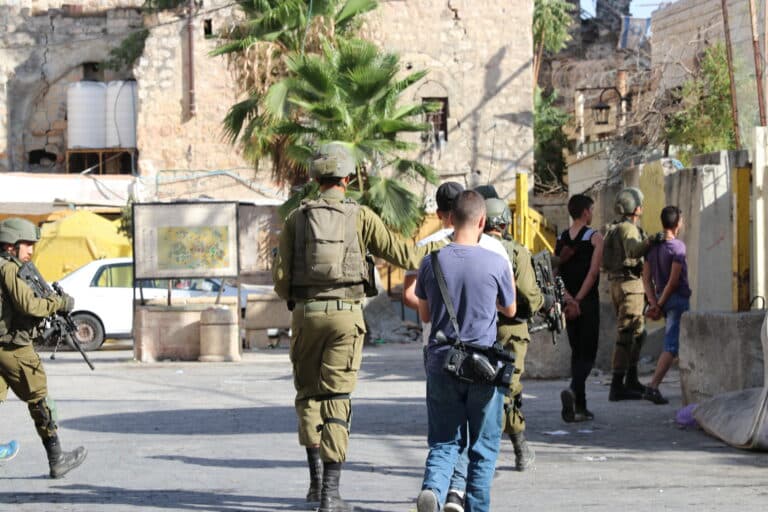 Rights of the Child denied