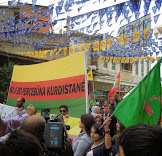 Streamers of blue, green, yellow and brown election pennants crisscrossed over
the street and almost blocked out the sun. The symbols of the major parties in
Iraqi Kurdistan for the 30 April election dominated the landscape.  However, on Tuesday, 15 April, new flags
waved from hand-held flagpoles. Many
Syrian Kurds who have fled their country because of the turmoil marched through
the streets of Sulaimani.  They were
crying out because the government of the region in which they have taken refuge
has decided to create a dividing ditch.  The KDP (Kurdish Democratic Party) that governs the area of
Iraqi Kurdistan bordering Syria has sent workers, bulldozers, and security
guards to facilitate the digging. It claims that the seventeen-kilometers-long,
three-meters-deep, and two-meters-wide ditch will prevent terrorists and
smugglers from entering the autonomous Kurdish region of Iraq.

However, the people of Rojava/Western/Syrian Kurdistan and their Iraqi Kurd
supporters see the ditch differently.  One man CPT’s Iraqi Kurdistan team
spoke to said, “After WWI Britain drew lines that artificially separated the
Kurds into four countries.  Now Kurds are dividing Kurds from Kurds with
ditches.”

Opinions about what is happening on the border—who is responsible and why they
are doing it fly fast and furious.
Kamal Chomani, an independent journalist in Iraqi Kurdistan told the
team, “The root of this is that KDP wants to have power in Rojava and PYD
(Democratic Union Party), the party in power there, won’t let them.  KDP have some small “puppet parties” in
Rojava but they don’t have much support. PYD don’t accept the demands of KDP.
So closing the border is a way to punish them and put pressure on them.”

The political parties deny these allegations against them.  But whatever the reason for the ditch,
the ordinary people who have already experienced the trauma of war suffer the
most. In the last week, there have also been several demonstrations on the
Syrian side of the border, joined by men and women, old and young who are upset
by the closing of the border.  Some
people showed their desperation by trying to fill in the ditches.  They want to be able to go to Iraqi
Kurdistan to work, have access to hospitals or to buy goods that are
unavailable in Syria.  Now they are
denied these opportunities by other Kurds.

Download the Report Over the last two decades, CPT has accompanied students and staff in the H2 area of al Khalil/Hebron on their way to

South Hebron Hills: Are we waiting to build a new refugee camp?

CPT reports on eight schools in the South Hebron Hills experiencing violence at the hands of occupation soldiers and settlers.