GREECE REFLECTION: Each refugee is an individual

GREECE REFLECTION: Each refugee is an individual

[The following has been adapted for CPTnet.  The original is available on CPT-Europe’s blog.] 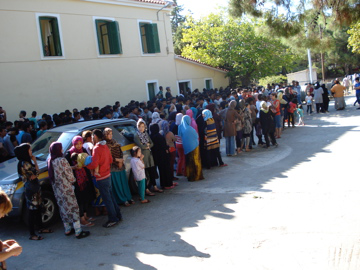 Too often, people speak about refugees as a unified, undifferentiated
group.  CPT places great emphasis on
undoing oppressions, an important part of which is recognising and addressing
white privilege.  One aspect of white privilege is that people who are
white are seen as individuals, while people who are not white are seen as
representative of their race, or grouping.

While here, I have spoken to as many refugees as I can, and listened to their individual
stories. Here are just a few of them.

Achmed (not his real name), a 28-year-old teacher from
Damascus, was arrested by the Syrian authorities and spent two months in jail,
accused of procuring wives for fighters. While in prison he was tortured with
beatings and with electricity. When we met him in Kara Tepe he showed us the
marks. The torturers broke some of his bones and he has residual pain in his
neck and shoulders. Yet he is looking forward to a better life in Germany. His
wife is pregnant with twins, their first children, and will follow him once the
babies are fit to travel. He thanked us warmly for our congratulations.

In the area near the port in Mytilene, where refugees
complete their initial registration, I spoke to Mohammed, who had just arrived.
He is also from Damascus and made the journey from Turkey with his brother and
a friend.  A youngish man, in some ways
not unlike many of the others who have made this trip. Except that Mohammed relies
on a wheelchair. He has lost the use of both legs and one arm following
injuries he received when an airplane dropped a bomb. The three had not known
the others in their boat before, but everyone worked together to help Mohammed,
he told me through one of his new friends who helped us with translation.

And then there is Ida. She is sixteen years old and comes
from Afghanistan. She was waiting with her parents and two mischievous younger
brothers to board the ferry to Piraeus. When I asked her why the family had
left their home, her answer was simple: ‘There is no security,’ she said. She
told me that she and her brothers had been unable to go to school because it
was not safe for them to leave the house. She had taught herself English in her
bedroom at home from her phone. Her ambition is to be a computer engineer; as
with English, this is a subject in which she is self-taught. Her family, too, is
making for Germany. But Ida has a sense that there are many difficulties still
ahead: ‘I am so afraid,’ she confided.

The people I have met here are so different. But they share
so much too: courage and hope. It must take so much courage to set out on this
journey, courage from those who are seeking a new life, and courage from those
(almost always the older generations) they are leaving behind. They come in
hope, hope that life in Europe will be better; as a European, my hope and my
prayer are that we will not fail them.

When death becomes a desire for children, the situation in which they live is certainly too difficult for anyone to bear.