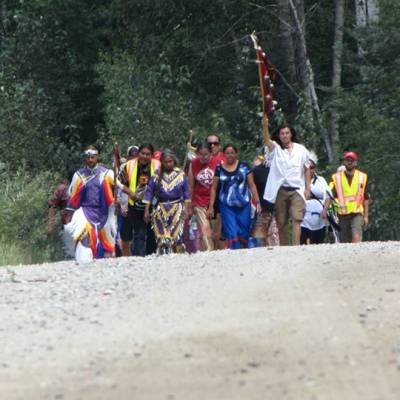 Over the course of one week, dozens of Anishinaabe
walkers marched 125 km along the Energy East pipeline route to oppose the
tar sands project and protect the water.

Organize by the Grassroots Indigenous Water Defence, it
called attention to the largest tar sands pipeline ever proposed, which
would cross Treaty 3 territory to carry 1.1 million barrels per day of oil
to the east coast of Canada, endangering dozens of waterways. Over two-dozen
walkers started at the Eagle Lake Pow-Wow in Northwestern Ontario, and ended at
Shoal Lake in Eastern Manitoba, joined by supporters and allies. The Indigenous
grassroots resistance to the Energy East pipeline in Treaty 3 is only the
beginning of the growing opposition to the project.

CPT Intern Madeleine Sutherland has put together a stirring
account of the walk in pictures, recordings, video and tweets. Click here to
take a look.

CPTers have walked alongside the Anishinaabe people of
Grassy Narrows since 2002 and were on this walk with them as well.  Help them continue walking in solidarity: https://www.cpt.org/participate/donate