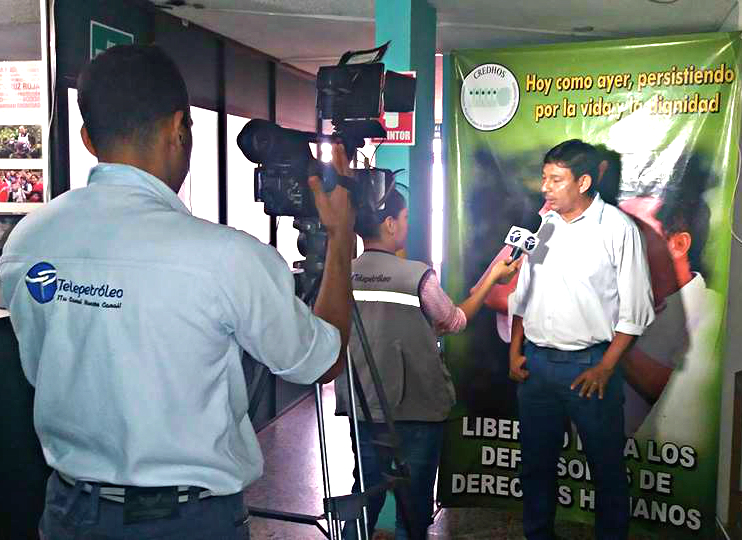 On 18 July 2016 the president of the human rights
organization CREDHOS (Regional Corporation for the Defense of Human Rights), Iván
Madero Vergel received a threatening call on his cellphone, at 3:03 p.m.:

“F***ing dog, f***ing scourge we are going to cut you up,
we’re going to kill you son of a b***, snitch; keep sticking your nose into
places it doesn’t belong, keep making public complaints; you have 48 hours to
leave the country”.  The call lasted fifty-five seconds.  Iván Madero hung up and proceeded to inform
his other colleagues who were present during the call, and immediately they
took the appropriate actions and called the police to report what had happened.

Just a few seconds passed when the secretary of the
organization said that she received another call on the office phone where she
was told; “Hey motherf*** b***, tell Mr. Iván Madero to stop getting into
matters that don’t concern him, to stop rummaging in other people’s past; he
has 48 hours to get out of the country.”  And as if this were not enough,
half an hour later Iván realized he had received a text message at 3:02 p.m.
which read: “Keep making public complaints, motherf***, keep hosting informants
in the office and we’ll put a bomb in there.”

The incident was reported immediately to the national police
who arrived at the office, initiated a protection route, and filed a
corresponding complaint with the Attorney General’s office and the Ombudsman’s
office.

It is important to make clear to the public that CREDHOS is
a non-governmental organization.   Its mission is the protection, promotion, and
defence of human rights in the Magdalena Medio region, or this we have
professional and suitable staff.  We are
aware that our work clashes with the interests of the enemies of peace.

The Regional Corporation for the Defence of Human Rights rejects
this type of intimidation that threatens the life and work of human rights
defenders in the region. These actions are aimed to dismantle, neutralize
and/or condition the work of social organizations, and demonstrate the lack of
guarantees offered by the national government to facilitate the work of Human
Rights Defenders and ensure life and dignity for all people and populations in
the Magdalena Medio region.

Although the progress of the peace agreements shows that
building peace is possible and the end of the war is closer than ever, the
Human Rights situation remains critical throughout the country and especially
in the Magdalena Medio region, where it remains difficult for human rights
defenders to carry out their work. The public complaints that we continue to
make against armed groups and particularly against criminal gangs— which today
represent the new expression of paramilitarism in the region—are evidence of
the acts of surveillance, harassment, intimidation and death threats that have
been occurring against members of the CREDHOS organization.

The Regional Corporation for the Defense of Human Rights –
CREDHOS, before the national and international community, denounces and rejects
yet again the constant death threats, surveillance and recordings to which
members of the corporation are subjected daily.

To the National Government:

To the international community and the Inter American
Society: