COLOMBIA: Celebrating the voice of Colombia women in the struggle for peace!

CPTnet
19 August 2016
COLOMBIA: Celebrating the voice of Colombia women in the
struggle for peace! 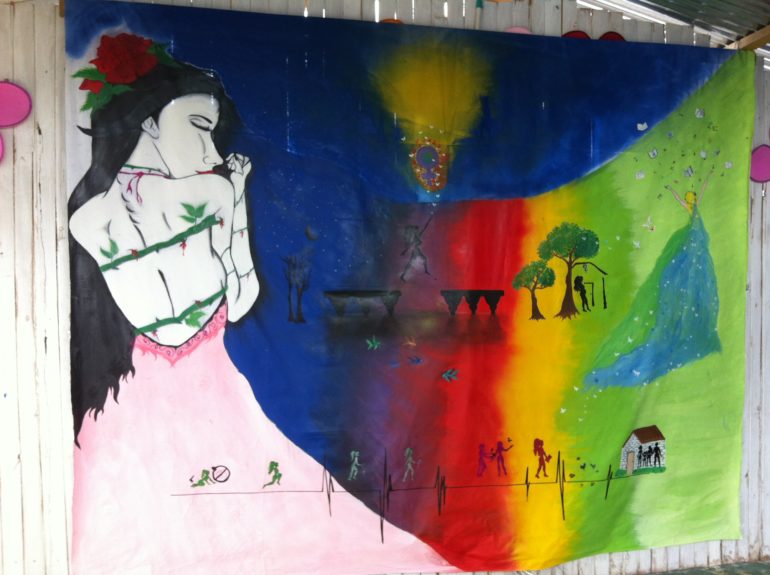 [Note: This article has been adapted for CPTnet. The
original is available on CPT-Colombia’s
blog.]

On July 21, 2016, to celebrate its forty-four years, the OFP
invited its members of several municipalities of the Magdalena Medio region and
sectors of Barrancabermeja, to build and paint murals depicting peace. The
women of OFP have always worked with symbols to express themselves. The murals,
ten in total, were profound symbols of how the women of OFP have built and
continue to build peace through its space led by and for women (though with
much love, they allowed us men to participate). The murals show the pain and
suffering of women as a result of the war and the appalling sexism that has
oppressed them. But the beauty of the effort is that they did not remain in the
pain. In the murals they showed that with strength and determination they
gained respect and were able to move forward with concrete proposals for a
better society. A just and decent society to live in peace.

”
… Since the government of Belisario Betancur in 1982 up to the current peace
process with President Santos, 61 documents have been signed that establish
pacts between the government and armed groups – some of which were part of peace
processes – where women on both sides have only managed an average
participation of about 3.6% as part of the direct negotiation teams.”

This quote is from an article published in the Colombian
magazine Semana, written by Nina
Chaparro, researcher at the Center for Law, Justice and Society: Dejusticia.

She shows us the stark reality that although men have the
main responsibility of having caused wars, we continue to believe that we will
have the best answers to end them.  Our
egos do not allow us to simply give space for women to participate in finding a
solution to end the violence