MEDITERRANEAN: The Space Within the Aegean Tectonic Plate

MEDITERRANEAN: The Space Within the Aegean Tectonic Plate

[Mohammad’s reflection has been condensed and adapted for
CPTnet.  The original is available on CPT-Europe’s
Facebook page.] 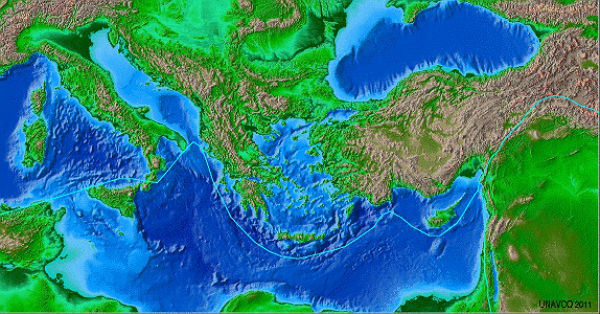 Our civilization is at war with spaces that are not
definable or determinable between the poles of dichotomies. It is a war against
what we cannot control, against that which flows and moves at its own speed and
space. We take all the spaces of the margins and sacrifice them for the sake of
our GLOBAL CITY. The civilized space is a fenced space

The earth is one entire space and does not have any borders.
There is nothing in the Aegean Sea that indicates where Europe begins and Asia
ends. Both the Turkish city of Ayvalik and the Greek city of Mytilene are parts
of the same Aegean tectonic plate. For most of history, Lesbos and Ayvalik have
been parts of the same context and political unit. Now one of them is outside
of the European fence and the other one is within. The Aegean Sea can be
understood as the space between two separate worlds, two continents and two
religions, as the space between peace and war, between good and evil and so on.
In this artificial space, hundreds of people are being brutally murdered by the
creators and defenders of this fence.

When you take a walk in Mytilene you can see the Polish
border police, Spanish, Greek and Norwegian coast guards, Frontex Corporation and
many other border patrol units. They are protecting the separation. The
refugees are challenging it by crossing the space that is forbidden to them by
European governments, making a puncture in “die Mauer.” The
homogenous countries constructed by the victorious powers of the World Wars are
being transformed and are regaining the diversity that was removed and
exterminated by the ethno- and religio-fascist governments of Europe.

In the micro-bubble of our time-perspective what is
happening now is quite extraordinary. In a macro-perspective of time these
events are entirely natural. The nation-states of Europe have succeeded in
protecting their borders from bigger migration waves until recently, and now
dissolving the obsolete nation-states that separate us from each other is the
natural course of things.

The Aegean plate is now Turkey and Greece, Europe and Asia,
Christianity and Islam, European Union and the excluded world. The region has
been poles of many dichotomies and many countries. Religions, borders and
alliances have tried to divide it but it has always remained the same tectonic
plate. Its inner parts are mostly covered with water but this water is not
space between two worlds but rather a space within one single tectonic plate,
moving at its tectonic speed, changing spaces and distances.