MEDITERRANEAN: Thoughts on Self-Organizing; What Happens when the Oatmeal Boils Over?

MEDITERRANEAN: Thoughts on Self-Organizing; What Happens when the Oatmeal
Boils Over?

[Note: This piece has been adapted for CPTnet. The original
is available on the CPT-Mediterranean Blog.]

One day I arrived early enough at the camp to find and talk
with the two Ethiopian women who rise at 4:30 am every morning to bake bread
for their fellow refugees. They told me they took on the task about three
months ago. They saw a need, and they just started baking.

Before then, they said there was nothing available in the
camp like the freshly baked flatbreads they now make. After
baking the bread, they also bag small rounds of risen dough, and put those in
the refrigerator to be given out later in the morning in the daily food
distribution. Some families prefer to make their own bread in the cabins and
tents where they stay at the camp.

There are many different cultures living together at the camp, so this bread is not exactly like
what they get at home,  but for

most, what the women are producing is more common to their
foodways than European-style bread.

Because handmade flatbread and dough is now available and
appreciated by the refugees, I say to the women, “You two must be very
important here!” They both give a good laugh, and with what I know to be both a
truth and an irony replied, “Yes. V.I.P’s. Very Important People.”

These women embody the self-organization that is happening
in Greece right now. The Greeks’ response to the economic crisis (as well as
the response to the human rights and humanitarian crisis of thousands of
refugees arriving in the country with no place to go for the foreseeable
future) has been decentralized and largely self-organized. It has arisen from a
deep sense of morality from the grassroots and is emerging as a construction of
solidarity between people. This grassroots solidarity is notable in a country
that had, for many years, relied upon the state to provide jobs that created a
more-or-less top-down, hierarchical, social structure. After the economic
collapse in 2008, this changed and people responded with an empowered sense of
what they might accomplish together, for each other, but also, after that, for
the refugees less fortunate than even themselves. The very Greek value of
“philotimo” found a new context.

Philotimo is an embodied, deeply held value within Greek
culture and also somewhat indefinable. One attempt to articulate it describes
“a unique conscious virtue of honor, pride, and dignity promoting empathy for
others, through acts of generosity and even sacrifice.”[1] So,
as the old way of working within the system quickly and mercilessly dissolves,
it is in the detritus, that philotimo is finding its expression in the
solidarity of self-organizing for change. 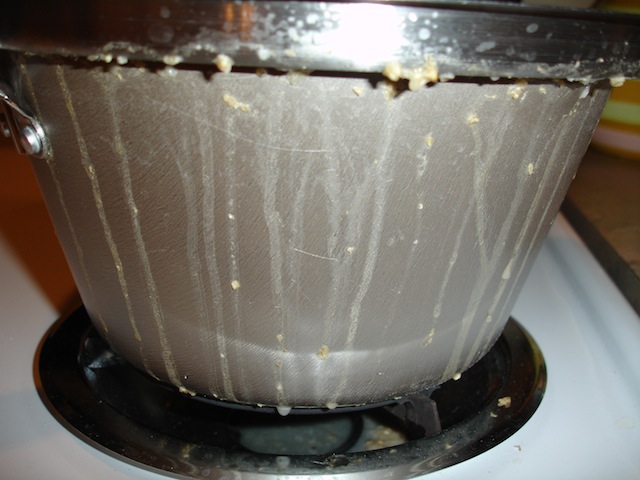 But, make no mistake, self-organizing is sloppy change. It’s
an imperfect process. Much like an unsupervised pot of oatmeal on the fire, the
action of this change from static to dynamic blops and blurps with energy,
foaming up, out, and over the top of the saucepan to coat the sides in a gooey
residue.

That said, it is entirely possible to produce a tasty and
nutritious meal from such an unrestrained cooking process, but only if you are
willing to accept that doing things in this way will likely create a bit of a
mess, and if you also admit that some of the essence of what is being created
will be lost in the exuberance of its coming into being, pooling (maybe even
burning) in the well around the flame on the cooker.

Yes, OK, for me there is a food metaphor for everything, but
I do see the parallels in what is happening on the ground in the self-organized
and autonomous refugee camp in Lesvos where I volunteer. This is an
extraordinary project that is helping many vulnerable people. It is wonderful
that it is happening, but it is not perfect in the process. Sometimes things
don’t go as planned. Sometimes it’s hard to know exactly what you should be
doing. Sometimes you wonder if what you are doing is making any difference. The
energy and enthusiasm of heartfelt desires to contribute positively and the
commitments on the part of many to do good can bump up against the cultural
differences of the volunteers and refugees alike. And then there is the deep
trauma lodged inside each of the refugees that manifests in different ways and
can hardly be imagined by the rest of us. There are communication challenges,
logistical challenges, and it must all be contained by an organizational
structure that is committed to cooperative, yet autonomous action.

But this is self-organizing. This is people working with
people and it is how things change for real. Through pathways of innovation,
adapting to the challenges we face together, we grow, change, and can overcome
that which oppresses. I know that what is happening inside the camp may spill
over at times, and some of the ideas and potential might be lost, but what
remains is the good stuff—so very, very good.

This camp is only one of many self-organized efforts that
exist on the island to help the refugees, along with the activities and
networks that inform and coordinate the countless volunteers, like myself,
arriving from all over the world to help. Yes, sometimes there is chaos in all
of this, and these structures can be criticized or dismissed by the governments
of the EU, local elected officials, or even by more established, well-funded
NGO’s as radical, rebellious, and uncontrolled, but that is the vantage point
of the privileged. It is the ground-truth that matters–the good that is
actually getting done is the tasty oatmeal left in a boiled-over pot. All of
these self-organized activities bring people together in solidarity and action
toward change. They engage with doing, not waiting, actively prefiguring a new
society with the belief that imperfect, collective action is always better than
living the feeling of helpless stagnation in the face of injustice and
indifference.

Liberation is a praxis: the action and reflection of men
and women upon their world in order to transform it.” Paulo Freire