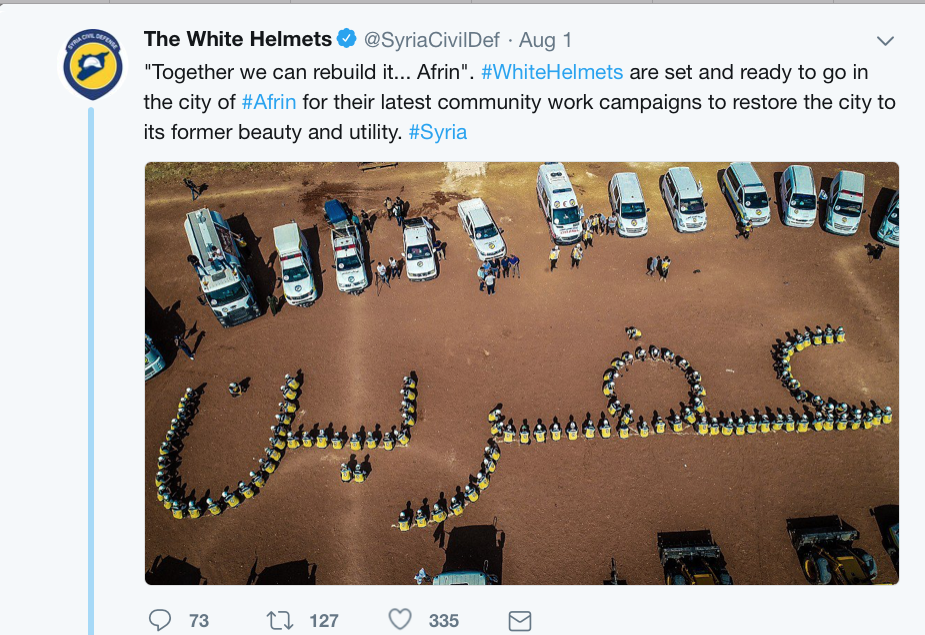 Since the Turkish military invaded the northwestern district of Afrin in Syria, the Syrian Defence Organization, popularly known as the “White Helmets,” have been collaborating with the occupying authorities and their Al-Qaeda-linked Free Syrian Army mercenaries.

In their tweets, they present themselves as doing humanitarian work for the residents of Afrin:

Civil Defense teams work away tirelessly clearing concrete and repairing damage in a painstaking job in #Janders city in #Afrin area. The White Helmets are determined to restore normalcy and safety to the city. pic.twitter.com/A84Sjbc3s5

Many civilians have helped and joined our teams in serving the community in #Afrin
also this child joined the #WhiteHelmets teams in cleaning up his city and rehabilitating its public facilities. pic.twitter.com/k0YDBFToqV

However, the United Nations, Human Rights Watch, and Amnesty International have all issued reports decrying the human rights abuses that are occurring in Afrin by Turkish army and the Free Syrian Army.  These abuses must surely be apparent to the White Helmets in Afrin.  Furthermore, many of the refugees displaced by the bombing in the regions where the White Helmets are from have been transferred to Afrin by Turkey and taken over the homes of the Kurds who were displaced by the Turkish invasion and military occupation.  Turkey has thus accomplished its goal of ethnically cleansing this area of Kurds.  Nowhere in their social media do the White Helmets mention these facts.

Christian Peacemaker Teams is in Iraqi Kurdistan, not the Syrian region of Kurdistan but our Kurdish partners are nevertheless concerned about the welfare of Kurds who have been displaced by Turkey and the few who remain under its brutal occupation. Furthermore, the occupation of Afrin seems to be just a step in the current Turkish government’s nationalistic aspirations to rebuild a new Ottoman Empire.   New maps Turkey has put out show it incorporating the Kurdish region of Iraq and Syria into Turkey’s borders:

It is already building new highways and infrastructure in Afrin that connects the region to Turkey. Turkey has been building military bases inside of Iraqi Kurdistan’s borders since the 1990s and since March 2018, after the ineffective international response to its invasion of Afrin, it accelerated its construction of new access roads and military bases in Iraqi Kurdistan from which they have shelled rural Kurdish communities, leading to the death of civilians, destruction to crops, fields, livestock and displacement.

WHAT WE ARE ASKING YOU TO DO:

The White Helmets are internationally famous, in part because of an Oscar-winning documentary, directed by Otto von Einsiedel, who has made a career of profiling ordinary people living heroically in difficult circumstances.

We would like you to adapt the letter below and send it to his production company, Grain Media (info@grainmedia.co.uk) asking him to visit Afrin and Iraqi Kurdistan and produce a documentary about his visit.  UK residents may mail von Einsiedel c/o his agents at

We would also like you to include the letter that Christian Peacemaker Teams sent the White Helmets, which follows the letter to von Einsiedel.

As Turkish and Iranian bombing of the Kurdish villagers along the borders of Iraqi Kurdistan escalates, we will be asking you to participate in subsequent steps in this campaign.  Thank you!

I am writing to you as someone with profound respect for your talent, vision and humanitarianism. I have recently become aware that the Syrian Civil Defence is working in coordination with the Turkish Military Occupation in the Kurdish region of Afrin in Syria and its Al Qaeda-affiliated mercenaries.  I am enclosing a letter that written by Christian Peacemaker Teams—which was nominated for the Nobel Peace Prize along with the White Helmets in 2017— expressing their concerns about this collaboration.  I was hoping that you and your crew could visit Afrin and the region of Iraqi Kurdistan where Turkey has installed military bases.  I think you could direct a brilliant follow-up film about how displaced Kurds and the Kurds who remain are struggling to maintain their identity as a society that uplifts women and lives in peace with multiple minority groups like Yazidis and Assyrians, while Turkey seeks to consolidate its control of the region.  You could also ask the White Helmets working there what their relationship is with the Turkish military.

LETTER FROM CHRISTIAN PEACEMAKER TEAMS TO THE SYRIAN CIVIL DEFENSE

Dear members of the Syrian Civil Defence AKA “White Helmets”

Last year, both you and our organization, Christian Peacemaker Teams were nominated for the Nobel Peace Prize.  We respect your courage and the work you have done.  We understand why you have been an inspiration for so many, including members of our organization and our supporters, and we know you have suffered grievous losses in your country’s war.

On your webpage, you cite the following as your vision:

We hope and pray for the cessation of bombing and fighting which target civilians and for peace and stability. We pledge that once fighting ends, we commit the Syria Civil Defence organisation to embark on the generational task of rebuilding Syria into a stable, prosperous and peace-loving nation in which the social, economic and political aspirations of her people can be realised.

We are a U.S.-based organization, with workers from Latin America, North America, Europe, the Middle East, and Asia. We work with people displaced by war and violence in Iraqi Kurdistan, Palestine, Colombia, on the Greek island of Lesvos, and in North American Indigenous communities. Because of our mutual human rights and life-affirming work, we are dismayed to learn that you are working with the Turkish invading forces and their Free Syrian Army mercenaries in the Syrian region of Afrin.

Before the Turkish invasion, Afrin was a region where Kurds, Arabs, Yazidis, Armenians and other minorities lived together peacefully.  Women were safe and held leadership positions in the government.   Now, more than 100,000 people have been violently displaced from their homes and prevented from returning. The authorities running Afrin are forbidding the use of the Kurdish language and sanctioning the kidnapping of women, forcing them to cover their faces and forcing Yazidis to convert to Islam.  Widespread looting runs rampant.

Syria: Turkey must stop serious violations by allied groups and its own forces in Afrin

Killings and Kidnappings of Civilians Continue in Afrin Amidst International Silence

“stable, prosperous and peace loving nation in which the social, economic and political aspirations of her people can be realised” can be collaborating with Turkey and the Free Syrian Army who have committed so many human rights violations and war crimes. We don’t understand how you, who have seen the results of Bashar Assad’s bombings of civilians, can support a government that bombs civilians both in Syria and in Northern Iraq where we work.

So we are imploring you to live up to your noble ideals—the ideals for which you received the Nobel nomination—and use your local and international influence to call for the following:

We know you have suffered much in your work and lost people you loved in Bashar Assad’s bombings.  We know that you do not want to be a part of Erdogan’s plan to inflict this pain on the shepherds and farmers of Qandil.

Brothers and sisters, you have an opportunity here to prove that you truly stand for the human rights of all civilians in the region.  Please speak out.

We hope to hear from you through our Administrative Director, Jonathan Shively, interimad@cpt.org

May peace prevail in this region and the rest of the world!