In January, 2019, CPT is excited to welcome a new Administrative Director, Muriel Schmid. In a revival of CPT’s past co-director model, Muriel will work with Milena Rincón, who has worked as Program Director for over two years and has helped guide the organization through several shifts in its organizational structure. Our Communications Coordinator sat down with both Muriel and Milena to ask them to share their thoughts, hopes and plans for their new co-directorship. 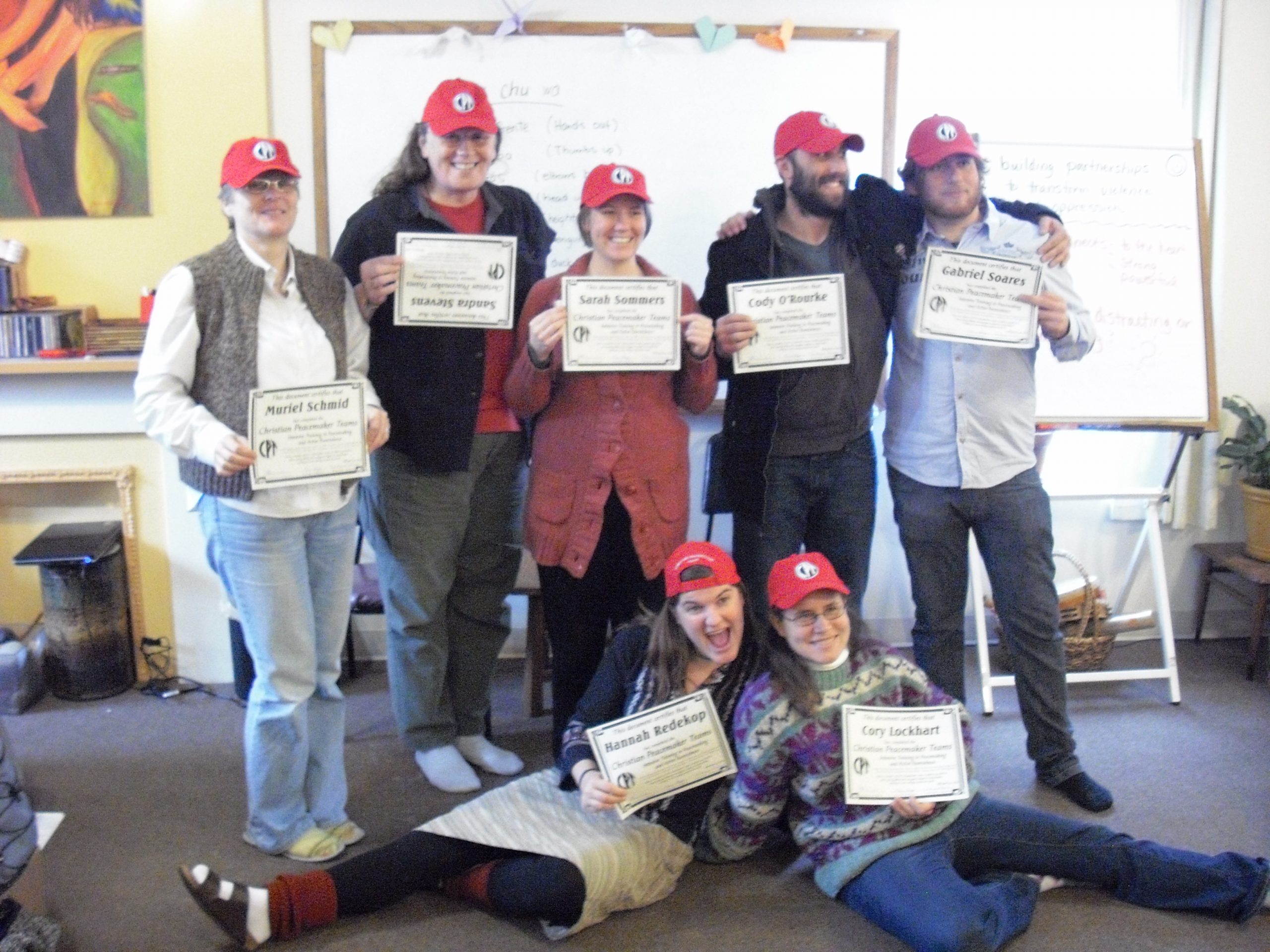 Muriel with the rest of her CPT training group in 2013.

Q: To start out with, I was hoping that each of you could tell me a little bit about yourself, and about what you bring to your roles as Administrative and Program Director.

MILENA: I am from Colombia, and I do my CPT work from Colombia. I have worked with CPT for almost 16 years. I grew up as first as a Roman Catholic, now I identify as Mennonite. I studied Psychology with a focus on Clinical Psychology as a part of my Bachelor, and I have a Masters in International Relations from a Swiss university, and a Masters in Political Science from a Colombian university. I am a very committed person to social justice issues; being a Colombian, a descendant of people who were forced into displacement, and witnessing the impact of violence in my country,  makes me very aware and very sensitive to issues of war, conflict, and the need for sustainable peace in Colombia . CPT offers an opportunity for me to do the work of peacebuilding and peacemaking, from a different perspective. Working with CPT, for 16 years, has helped me to be who I am.

What I bring: perspective, commitment, and honesty for this work. Being from south America, and having served in many contexts and cultures where conflict is present, but also different approaches to peacemaking in our partner communities.

MURIEL: I am a theologian and a minister who grew up in the French-speaking part of Switzerland. My ties are still pretty strong with Switzerland. I came to the US for an extended period of time for the first time in 1995 when I was 30, and that really kind of changed the course of my life in many ways; I met my partner, who is my spouse now, so that’s definitely changed a lot of my life. My first encounter with Christians who were more oriented towards social justice and engagement was with the Quakers. It actually answered some kind of longing I had to find Christians who were living their faith in a very concrete way, in engagement, in social justice issues. That pushed me in different directions but led me to CPT many years later. I got acquainted with CPT’s work when I was in Palestine with EAPPI, and I did my delegation and then my training with CPT. Then I worked as Program Director for two years from 2014-2016.

What I can bring to CPT: doubt, questions. And I’ve been working in different environments … I worked in administration at a university in the US, I taught, I did some training in mediation and work for the Court’s mediation program in Utah, I worked as a minister for 10 years. So [I  definitely bring] organizational skills. And people skills; I like to engage with people, I like to listen to stories.

Q: For the next question, I thought that we could focus more on the co-leadership model. How would you describe how your roles fit into the structure of CPT?

MILENA: This is not a new model; we had a co-director model several years ago. One of the reasons we returned to this model was because the collaboration between the two directors seems very key and very important for the development of the organization. Each director brought specific skills that will help to complement each other with the purpose of helping the organization to grow.

MURIEL: I would emphasize that CPT is going back to a model that has existed at some point and seemed to be working to some extent at least, and the idea of going back to that to me translates some kind of trust in the model. I think I said that in the interview process, but the fact that Milena was the other director mattered for several reasons. First, I know Milena; I know her work and I know she has a long history with CPT. But also she’s a person of color, she lives in another place, she has another context, another environment and perspective, and I think that matters for CPT especially. So that’s unique, the fact that we are two women and we are not both white, or the fact that neither one of us is from Turtle Island, and I hope it will bring different things or a different way to think about it. When Milena was talking I had this image of Janus, the two-faced god in traditional Roman mythology. I think it really matters that you have two pairs of eyes looking at things, and [you are] able to share about what you look at, not looking in the same direction in the same way.

MILENA: It could be a very powerful model for CPT to have, in this case, two females in the leadership, and two females from — actually that’s right Muriel, neither of us is originally from the US context. We will bring an outsider perspective view. So that will be very interesting.

Q: So we are returning to a model that we have faith in from the past of CPT, but one thing that is very new about it is the individuals involved, and the dynamic of the two of you together. Have you worked together before, and how do the two of you anticipate working together as a team?

MURIEL: The formal way we worked together was when I was Program Director and Milena was a Program Support Coordinator for — I don’t know how many projects [laughs] but I think it was Iraqi Kurdistan and Colombia at the time, right? That was the formal way we worked together, and then in that capacity we did work on two trainings together as part of the training team. And then I followed closely her work for her Masters thesis in Switzerland, and I have been a little bit supporting Milena in her role as Program Director, as I felt that could be one of my tasks as reservist also.

In terms of the formal work that we did together, I would go back to Undoing Oppressions and I would say we complement each other pretty well in the type of oppressions we pay attention to. I also appreciate [that] usually I think [Milena] says what she thinks, which is helpful when you work closely with someone. So I don’t feel like we would spiral into, like, a terrible conflict together. [laughs] But you know, anything can happen, but I don’t anticipate having conflict with Milena. Disagreement, probably, things we need to explain, yes, but we would not block the organization because we have a personal conflict.

MILENA: We both served on EAPPI too, so we got experience from another organization on how accompaniment can be done or not to be done.

Also a very calm presence. Maybe my feelings and my emotions are more evident at all times. Muriel has a very calm steady presence. For me it is very important in the work, kind of grounds me too. And this is something that I found a lot working with [Interim Administrative Director] Jonathan too. And it is about the experience you have and he has had, Muriel, in leadership positions, coming from organizations outside of CPT. All the leadership skills I have learned have been within CPT, so working with somebody who has outside experience is really good for me.

And I also want to highlight the conversations about Undoing Oppressions and especially all the growth I need to do, and I feel Muriel has advanced a lot in that growth as a theologian, in relation with Christian hegemony. So a lot of conversations have been around how CPT culture can grow on understanding better Christian hegemony, so that all of us can feel we are in a safe environment in terms of spirituality too.

Q: CPT is very much in a process of change. If you could think of one or two sentences that would describe one thing that you’re really hoping CPT can achieve in the next two or three years, what comes to mind?

MURIEL: Building on what Milena said about rethinking accompaniment and how we do accompaniment, I would say that for me there is something about CPT’s identity that maybe needs to be reassembled. What is the face you present to the outside and how do you formulate, what is it that we do, really,? And then I would say, export our skills. As Milena [has] said, we serve as a model for other programs, can we expand that? The training has very high rating in many circles? And I think the work around Undoing Oppressions, it’s pretty unique, can we export that as well? Bring our strength outside of CPT.

MILENA: Yeah, I will agree with Muriel about the need for CPT to get clarity about what CPT is. We mentioned that we are accompaniers, that we accompany, and maybe the times are telling us that it is time for us to rethink, or maybe to innovate on what we want to do. What Muriel mentioned for example about skills and training to other organizations could be an area of growth for us, how we can share those skills. And I also imagine, especially from the program area, we have dreamed about increasing our potential for communications and for advocacy. And I say this because partners believe that we do a lot of advocacy and communication, and I don’t know if we are really corresponding to the expectations we are creating with the partners about those two areas. I hope we can finally do it. For that we need stability. So I hope [laughs] we both, Muriel, as directors can create this sense of stability for the organization.

Of course my vision is very narrow to programs and I was talking about partners, but CPT is so many people! Also we have a lot of people outside supporting us. And I get the sense that they like to be a part of CPT, and they want to be considered part of CPT, and so my question is how we can effectively can make them feel that they are actually part of the organization in the capacity they want.

This interview highlights some of CPT’s greatest hopes for the coming years: a revival of the co-directorship model with an eye to both stability and growth. Muriel and Milena will begin their directorial partnership with a history of collaboration and mutual respect, with a set of complementary experiences and skills, and with a shared commitment to the future of the organization. We look forward to seeing what new developments their leadership will bring.