A threat to the Occupation: CPT Reservist denied entry to Israel/Palestine

On January 31, 2019, I was denied entry into Israel, which adds my name to a long list of human rights advocates who also did not pass the political litmus test required for entry. After hours of interrogation, I was told that my work to “free the people of Palestine is a threat to the State of Israel.” For a government that claims to be “the only democracy in the Middle East,” this ideological exclusion and censorship reveals an intolerant and repressive regime.

But these actions did not surprise me; over the last six years I have traveled back and forth to the West Bank, where I have witnessed the Israeli Occupation first hand. Since 2015, I have been part of the nonviolent human rights group Christian Peacemaker Teams, which works around the world standing with oppressed communities in their journey of resistance. CPT has been active in ah-Khalil (Hebron), Palestine, since 1995, working with Israeli and Palestinian partners to support Palestinians in their daily resistance of the Occupation and their struggle for human dignity. 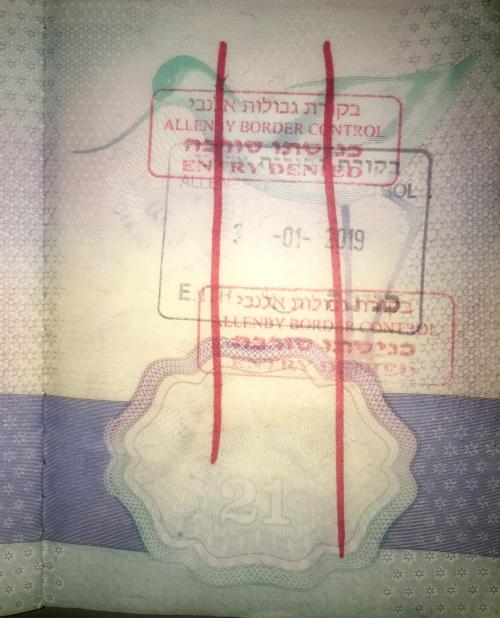 Every day Palestinians in Hebron are subjected to demeaning and dehumanizing behavior at the hands of the Israeli military. With 20 permanent checkpoints dividing the city, going to school or work becomes a difficult task. School areas are regularly doused in tear gas, sometimes in retaliation to children throwing stones at the fortified check points and sometimes merely as a show of force. The toxic fumes cause fatigue and disorientation, and prolonged exposure is known to result in respiratory problems. At night, home raids occur with no apparent reason other than to intimidate residents. The goal is to make life hard, to limit freedom of movement, to impose psychological warfare that fosters an environment of fear and trauma.

One question I was asked during my interrogation was whether I had been part of any illegal demonstrations. Military Order 101 prohibits Palestinians from peaceful protest, and anyone breaching this order faces up to 10 years in prison. The right to freedom of peaceful assembly and the right to freedom of expression is something protected by the International Covenant on Civil and Political Rights, to which Israel is party. But even the raising of a Palestinian flag is deemed a criminal act and banned in the West Bank. There is quite literally one law for Israeli citizens and another for Palestinians living in the West Bank; Jewish residents, known as settlers, live under Israeli civil law, whereas Palestinian residents live under Israeli military law. The differences in governance are stark.

Being part of CPT meant standing in solidarity with the Palestinian communities that these Israeli apartheid practices affect. We are on the ground to witness, record and, when appropriate, intervene in human rights violations conducted by the Israeli military. We stand at the checkpoints on school mornings and afternoons. We respond to emergencies 24 hours a day. We support families when their children are detained. We support our partners when they organize events and nonviolent demonstrations. We accompany families during harvest seasons, when settler attacks are most likely to occur, and spend time in villages under threat of demolition, often staying overnight when the bulldozers are most likely to roll in.

Everything we witness, we document, including (to the best of our ability) every tear gas canister, sound grenade, rubber coated steel bullet and round of live ammunition used by the Israeli military. All of the recorded information is compiled into quarterly reports, with a special school report each semester, to record the treatment of children and violations of their right to education. We share our reports with the international community as well as within our home communities, where we use them to advocate for Palestinian rights. It is our belief that only when full equality is achieved for both Palestinians and Israelis, a just and lasting peace will follow, and we work to that end. However, since September 2018, seven CPT team members have been denied entry into Israel, which has a direct impact on our work and our commitment to remain present within the community we support.

June 2017 marked 50 years of Israel’s occupation of the West Bank and Gaza. For more than half a century Israel has oppressed, dispossessed and abused the human rights of the Palestinian people and now it continues to implement policies that will ensure it maintains control and promotes its interest. All the people living in Israel and Palestine have the right to self-determination. The occupation must end. So I say this to the State of Israel: I am a threat to your systems of oppression. I will endlessly seek a nonviolent solution to the violent reality you have imposed and I will always hope for the liberation of all peoples, and a just peace.

If you would like to join me in supporting the freedom of Palestinians living under occupation, you can take action by: