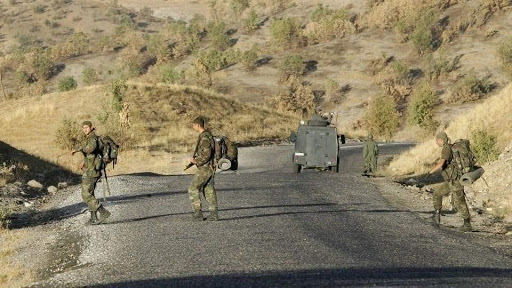 On 20 August 2020, Turkish soldiers from one of their military bases in Gar and Xalat opened fire on Shapan village in the sub-district of Mergasor, located in the Iraqi Kurdistan region. As a result, 33-year-old Nawzad Rasheed was wounded from the gunfire.

After having surgery to remove the bullet out of his hand, Nawzad’s hand is paralyzed. In a conversation with the CPT Iraqi Kurdistan team about the incident, Nawzad said, “the incident is still affecting my life, I cannot think about it. It literally ruined my life.”

Kak Ariff, Nawzad’s uncle, told CPT the story: “Nawzad was heading from Shapan to Dayla village on a motorcycle, which is a few minutes away from our village to bring some food and supplies to his family. Before reaching the village, Turkish soldiers shot him, and he was severely wounded after falling off his motorcycle.”

Turkey has been bombing villages around Mergasor and Sidakan district continuously for 36 years. Having stationed massive military bases on the mountains of Sarzilokan, Chyadel, Barmiza and Shekh Valley, the Turkish military poses an enormous threat to the villagers’ lives in the area. Furthermore, Turkey has established military roads between its bases, limiting villagers’ movements.

Mam Faris, the Mukhtar of Shapan village, said, “We have been displaced five times since 1984. There used to be 25 families in the village, now only 11 families remain here, and the rest have left the village due to the threats from bombardments.” He further added, “We cannot move freely in our village because Turkey has established many military bases and bridges. Worse still, they have planted mines on the roads to block the way, and people can no longer reach some areas. The Turkish president arrogantly talks about his Islamic background, but we are Muslims as well, and we pray to the same God, so why are we being bombarded and killed on our lands?”

In the middle of June, Turkey announced two major military operations in the Kurdistan Region, an air operation called Claw-Eagle and a ground operation called Claw-Tiger. The ground operation consisted of Turkish military expansion with bases in the Haftanin and Sidakan areas. Due to these military aggressions and expansions, dozens of villages evacuated from Sidakan and Mergasor in Soran District, as well as the sub-districts Batifa and Darkar in Zakho, displacing hundreds of people. Turkish military also targeted numerous mosques, hospitals, and schools and burned thousands of agricultural lands to the ground.

The latest Turkish military operation marks the 11th operation launched by Turkey on Iraqi Kurdistan. As Mam Faris, Mukhtar of Shapan village, says, “We are impatiently waiting for the time when Turkey ends this war and withdraws its military bases stationed in Kurdistan Region so that villagers can live in peace and security without the fear of being displaced once again.”

Download the Report Over the last two decades, CPT has accompanied students and staff in the H2 area of al Khalil/Hebron on their way to

South Hebron Hills: Are we waiting to build a new refugee camp?

CPT reports on eight schools in the South Hebron Hills experiencing violence at the hands of occupation soldiers and settlers.