[NOTE: The following release has been edited for length. Vriesinga’s original release is available here.] 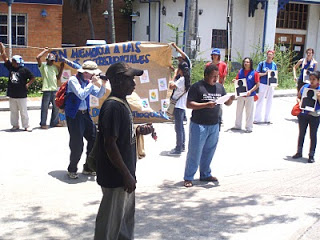 Christian
Peacemaker Jenny Rodriguez and I visited the community of Las Pavas last month
(May 2011).  It was good to see
them back on their land, where I first met them in March of 2009.  The Colombian Constitutional Court has
recognized that the community’s claims on these lands have merit, so the
likelihood of further displacements seems remote.

However,
despite the court ruling, and despite the Ministry of the Environment’s assessment
that palm oil cultivation would adversely affect these 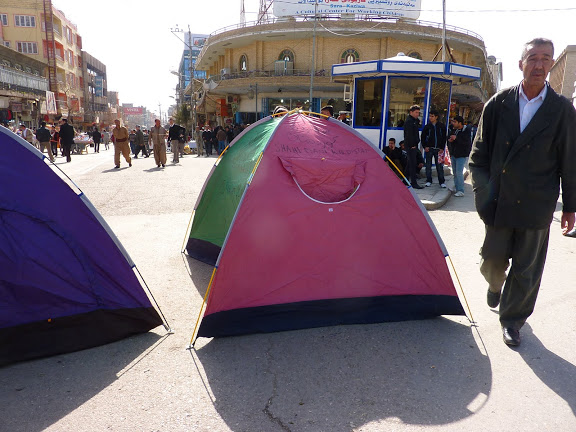 lands, the palm oil
company Aportes San Isidro continues to occupy these lands.  Some of its personnel, protected by
police, are living about ten meters from the community’s homes.  Aportes San Isidro is unlikely to cease
its operations until the Colombia legal system annuls its title to the land.  Only then can the families of Las Pavas
receive their registration as the legitimate title-holders.

Las Pavas bases
its claim to this land on the land forfeiture by the previous title-holder and Las
Pavas’ right of possession.  Under
Colombia’s land reform laws, a property owner forfeits title to lands that he
or she fails to cultivate or otherwise occupy for an extended period.  These laws grant rights of ownership to
third parties who have occupied and cultivated such lands (or state-owned
lands) for period of five years or more.
Under these criteria, the community of Las Pavas applied to the
Colombian Institute for Rural Development (INCODER) for the right of possession
back in 2006.  The Constitutional
Court’s ruling in favour of the community requires INCODER, which so far has
denied the community’s claims to the land, to reopen the case.

INCODER has a
conflict of interest.  It is
simultaneously responsible for both land reform and rural development in
Colombia.  Aportes San Isidro’s
palm oil cultivations complement INCODER’s economic development plans for the
area, since they are likely to contribute to economic growth by supplying the
global demand for bio-fuel.  The
Las Pavas community’s development plans, on the other hand, focus not on national
economic growth, but rather food security, the environment, and the future well-being
of the community.  These factors
could very well make INCODER sympathetic to Aportes San Isidro’s palm oil
production, and therefore reluctant to comply with the Constitutional Court’s
ruling that requires the reopening of the Las Pavas community’s claims to these
lands.

Even so, here
in Colombia the return of the community of Las Pavas to its land is described
as a miracle.  Very few of the
four-million-and-something million internally displaced Colombians have
regained access to their land.  Indeed, since the new government of Juan Manuel Santos was
inaugurated at the start of August 2010, at least eight leaders of displaced
communities directly involved in advocating for return of their families’ or
their communities’ land have been assassinated, presumably by paramilitary or
criminal gangs that benefited from stolen land.

The combined
political and legal efforts of a host of national and international
allies-campaigns against Body Shop, Daabon Organics helped raise the community’s
profile, ensuring that the community leaders were not killed despite threats
against them and allowing the community to return to its land.  Furthermore, the Constitutional Court of
Colombia, unlike the lower courts, aligned itself with the court of public
opinion and ruled in favour of the community. 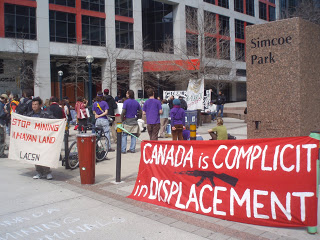 The annulment
of Aportes San Isidro’s land title, and its removal from the lands in question
must follow the Constitutional Court’s ruling; the Colombian authorities must
issue land titles to the community; and the community must receive compensation
for all the environmental and property damage done by the Daabon and Aportes
San Isidro consortium.  Only then can
the community members begin the work of rebuilding their lives and a better
future for their children.