The news spread through the city of Suleimaniya so quickly.  Within an hour, Kurdish news outlets let the locals know that something bad had
happened.  From there, it moved
even more quickly across the ocean.  By the evening of 1 March, I was shocked to read it in my
Manitoba prairie city’s newspaper: “Iraqi student kills American teacher in
Christians school murder-suicide. “
Along with the bare facts, the questions and rumours arose.  Why
had the eighteen-year-old Kurdish boy carried a handgun to class in a
Christian school in Suleimaniya and shot his teacher to death on 1 March?  Was this the consequence of religious
disagreement?  Was there some other
kind of conflict between the two of them?  How could a handgun have entered the classroom?

Some our Kurdish partners called a meeting to see if some sort of action should
take place.  None of us had known
either the teacher or the boy. Reports
said that this type of shooting was not so unusual, that it happens in the USA
all the time, but violence like this had never happened in a school in Kurdish
Northern Iraq.  Kurds were reeling
and asking themselves, what is it about their country that allows people to
settle differences with a gun in a classroom?  They were sad, angry, and even embarrassed.  We all left the meeting with some ideas, but many of us had the feeling that if
remembrance was done for the victim, than it had to be for the assailant as
well.  Both were human beings that
were equally loved by God.  Both of
them were victims of the weapon. 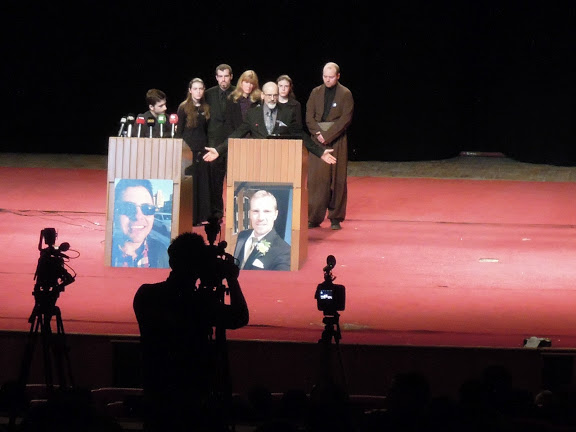 teacher
Jeremiah Small.  However, this
funeral was to be a time to remember both Jeremiah and Bayar.

On the morning of 6 March the large city cultural hall was almost full of
students and their families, the expatriate community, religious leaders and
many others.  The media was out in full force as well with bright lights
and padded microphones.

On the stage stood two large photographs, one of tall, strong Jeremiah
and one of a smiling younger man, Bayar.  There were prayers, hymns, and eulogies
from students who loved the teacher and messages from officials.  There were mentions of Bayar by fellow
students who were obviously struggling to come to terms with a comrade who had
caused this tragedy but now was dead.  Bayar’s father stood and spoke with
emotion about knowing that there was conflict between the two, but having no
idea that it would lead to this tragedy.  He apologized to the Small family and said,  “The shooting was a painful thing to us also.”

After Mr. Small stood with his family on the stage, a bit of a miracle
happened.  We saw a Christian
family who had traveled from Washington State to bury their son in Kurdistan,
because Jeremiah had no insurance coverage for transporting his body and because
he had lived here for seven years and loved it.  We saw a Muslim family grieving the loss of a son who had committed
murder and then ended his own life.  But Mr. Small said to the gathered crowd,  “The killing of our son should be turned
into an event to call for peace and coexistence.  We do not have any hatred for the family of the student who
killed our son.”  Then, they filed
down from the stage.  Instead of
returning directly to their seats, they moved down the aisle to the Bayar’s
family.  They reached out their
arms and invited them to join in their mutual grief.  The Kurdish family accepted the invitation and they hugged
and cried together.  Something very
small, but something also very big.