COLOMBIA REFLECTION: Consider the lilies. Then consider your investments.

[Note: The following reflection has been edited for
length.  The original is available
here.]

Consider the lilies.  They’re not lilies.  I don’t actually know what they are called.  But I did consider them.  Not even Solomon in all his glory was 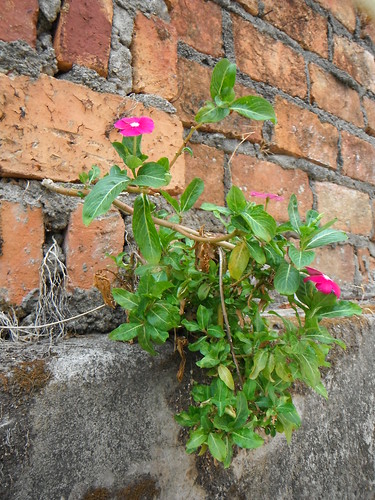 arrayed as one of these.  And there
are two of them growing out of the wall on our patio, and several more out
front. They thrive on nothing. No soil, no shade from the scorching sun, and
they don’t even seem to mind if it doesn’t rain or if no one waters them for a
week or more.  In fact they are
they only plants we have that are still happy when my teammate Gladys returns
after having been away for several days and rest of us have forgotten to look
after the plants.

These beautiful plants seem to make the most of a very small
budget.  I wonder if as a team we
could learn to be more like them.  As
it is, we have had to curtail some of our activities, including our peacemaking
activities, in order to stay within our budget for transportation, food, household
supplies, accompaniments, etc.  But
sometimes go over the allotted budget.  When this happens we try to make up for the shortfall somehow
in the following months.  I’m
finding it quite difficult to flourish like those amazing non-lilies.

We have all been impacted by the global economic crisis—our
Colombian partners even more than ourselves. Yet many of them are willing to
help us with food, travel, and lodging expenses when they ask us for
accompaniment. Whatever else they may be thinking, they apparently do value and
appreciate our work.

Our collective budget deficits are more likely due to
choices made by the relatively privileged.  They have divested from justice, human rights, and
environmental protection in an attempt to recover, retain, and protect their
membership in an ever-decreasing minority of super-consumers.  They are over-invested and reliant on
maintaining an oppressive and violent world order that has traditionally
conferred special privileges on them.  It is not the Kingdom of God they are seeking first, but
rather their own economic recovery, security, growth and membership in that
over-privileged class. Only after they have secured these things would they
consider reinvesting in justice, human rights, environmental protection,
undoing oppressions, and the Kingdom of God. For where their security lies,
there will be their hearts and investments also.  Apparently, we can no longer count on their support.

Can we count on yours?  Where does your security lie?  If you haven’t already, won’t you consider investing in the
just and Peaceable Kingdom?