COLOMBIA: Four things you should know about Colombia’s armed conflict

CPTnet
22 May 2012
COLOMBIA: Four things you should know about Colombia’s armed conflict

Contrary to what major world news sources say, the war in
Colombia is about more than drugs.
So much of what the global north consumes comes from Colombia—flowers,
bananas, coffee, chocolate, gold, oil, coal, palm oil—so why do we know so
little about this country?  The war
in Colombia has been raging for the last forty-eight years, which begs the
question, “why?”  To get
to the heart of that question, here are four things everyone should know about
Colombia’s armed conflict.

1. First and foremost, the war is about land.

Over the course of the war, the people that have benefited
most from the conflict have been the multinational corporations and large landowners.
Colombia has the largest
internally displaced population in the world.  Around 5,000,000 people have fled their homes.  The majority of these people were small
farmers who left their farms to take refuge in urban centers.  This displacement has left land vacant
for multinational companies and rich land owners.  According to Peace Brigades International, “40% of
Colombia’s land has been licensed to, or is being solicited by, multinational
companies in order to develop mineral and crude oil mining projects.”  Furthermore, about .4% of the landowners
own 61% of the land.

2. Human rights defenders continue to risk their lives by
nonviolently struggling for justice and attempting to return to their land.

Colombians continue to call for justice and peace for their
communities.  Many community
leaders are risking their lives to defend their land and seek justice for their
lost loved ones.  For example,
according to Colombia’s leading organization on displacement, CODHES, between
March 2002 and January 2011, forty-four displaced community leaders who were
attempting to return to their land were killed.  Moreover, the organization “Somos Defensores”
documented that there were 239 violent attacks against human rights defenders
in 2011.  The same year, forty-nine
human rights defenders were killed in Colombia.

3. It is the most dangerous place for a union
organizer in the world. 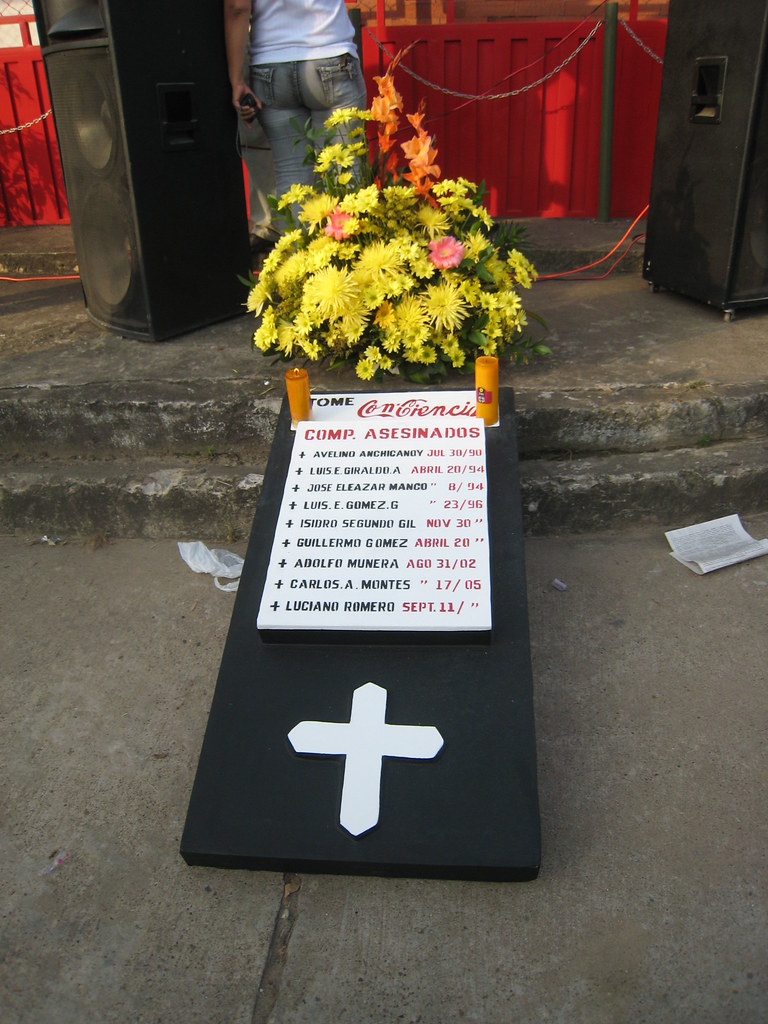 More union members are killed in Colombia than in the rest
of the world combined.  In October,
the United States and Colombia signed a Free Trade Agreement that will ensure the
ongoing extraction of natural resources and the continued threats to the
security of union members.  Over
2,500 trade unionists have been killed in Colombia in the last 20 years and in
98% of the cases, no one was brought to justice.  Human rights organizations brought these concerns to the US
and Colombian governments before the signing of the FTA and the Labor Action
Plan, meant to secure the rights of union workers.  However, worker rights have deteriorated.  In 2011, thirty trade unionists were
murdered and four unionists have been killed thus far in 2012.

4. The United States has given billions of dollars in
military aid to Colombia

Under the disguises of the “War on Drugs” and the
“War on Terror,” the US government continues to pour military aid
into Colombia and train Colombia soldiers in counter-insurgency warfare, while
human rights abuses continue.

Since the implementation of Plan Colombia in 2000, the
United States has given six billion dollars in military aid, mostly to fight
the “War on Drugs.”  However,
many experts say that this policy is a proven failure.  Furthermore, a recent report by the
Fellowship of Reconciliation notes that “U.S. officials neglected
their obligation under the Leahy Law [which prohibits U.S. aid going to
battalions that commit human rights abuses], and that many Colombian military
units committed even more extrajudicial killings during and after the highest
levels of U.S. assistance to those units.”