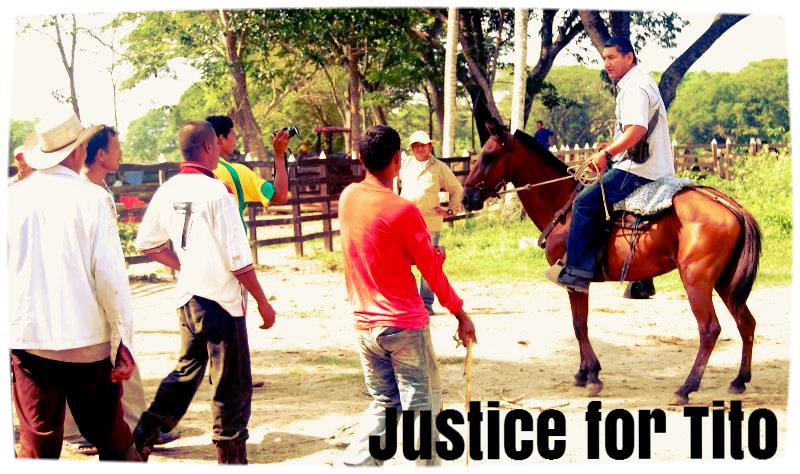 On 28 May 2013, around
fifty people of the Las Pavas community entered their land with their community
tractor carrying palm branches in order to build a roof for their communal
ranch house.  Upon arriving they saw various armed men come out of the
brush, who were identified as Mario Marmol Montero, Francisco Florez Marmol,
and Carlos who goes by the name “El Calvo,” all of whom are security
guards for the palm company Aportes San Isidro.  The guards shot
repeatedly and indiscriminately at the men, women, and children of the
community, shooting out the tire of the tractor as well.

On 30 May at 5:30 p.m., Tito Alvear Perez, a member of Las Pavas community, was
assaulted by Mario Marmol, Carlos “El Calvo” and a man who goes by “Gentil,”—employees
of the palm oil company Aportes San Isidro.  He was walking from the farm “El Oasis” back
towards Las Pavas after having gone to fetch water for a meal when the security
guards beat him using machetes, cutting one of his legs and his arm,
kicking him in the head repeatedly, and insulting him.  They threatened
his life and that of other community members and shot at him twice.  Hearing
the shots, Bladimir Alvear ran out to find Tito bleeding while the company
guards ran away.  Tito is in stable condition and Las Pavas leaders are
filing charges with the authorities.

Marmol and his armed escorts have assaulted the Las Pavas community
members on several occasions including in recent weeks when they fired
shots at members of the community as they went about their daily work on the
land.  Local police authorities have done nothing to intervene, granting
Marmol complete impunity for his actions.  Mario Marmol has threatened to
kill Las Pavas community members on numerous occasions.