[Note:
The following release was written by a member of CPT Holy Week delegation for
Colombian nationals.  It has been
edited for length. The original is available here.]

On
16 April 2014 our twelve-person delegation traveled by van, motorized canoe,
and foot to the community of Las
Pavas.

We
arrived at a community in mourning for the death of Rogelio Campos
Gonzales.  Also known as “Pipio,” he
died on 13 April, after suffering a heart attack.  Those living on the farm struggle with the question, “if the
gate [that the palm oil company Aportes San Isidro had installed across the one
road leading into Las Pavas to access difficult] did not exist, would it have
been possible to avoid this tragedy?”

Even
during this difficult time for the community, they received us with love and told
and sang their stories.  While we listened, it was difficult to contain
our emotions.

The
gate for the people of Las Pavas represents oppression, death, isolation,
discrimination, humiliation, and prison.  One
of the purposes of our trip was to participate in a public action to redefine
the gate that the security guards use to control movement from a symbol of
oppression into a symbol of hope, peace, and freedom.

That night, with the the community, we decided to paint
the gate, sing, pray, and light candles.  In talking with the community,
we agreed that they would participate in the action as observers, since they
are the ones who will remain on the land and if they were to participate
actively they could face repercussions.

After
breakfast the next morning, the community had us come together for a time of
prayer and worship.  We sang “How Great Thou Art” among other hymns, and
readied ourselves to head out to the gate.

Everyone
took his or her place as the community surrounded us in protection.  Just
as we got to the gate, security guards from the palm company came out to meet
us and took pictures of us.  Our
designated photographers also began to take photos.

We
started with a prayer to give a sacred space to the action.  We started to
paint as we carried out the liturgy, and the security guards remained up
against the fence.  Even some
children were there to watch us.

We
prayed; we sang; we painted, and above all we enjoyed what we were doing.
We took a moment to remember Pipio and light candles while we prayed in
his honor.

After
we covered the gate in messages of love and life, it became a representation of
the peace and hope of the Las Pavas community members who are anxious to be
free—to move through their land without any obstacles, without fear of losing
their animals, their crops, and without suffering attacks from the palm oil
company guards.

Now
those of us who participated in the Holy Week delegation are trying to
summarize and our experience, attempting to put together a puzzle of emotions
and convictions and looking for a concrete way to follow up on our commitment
to be allies to the community. 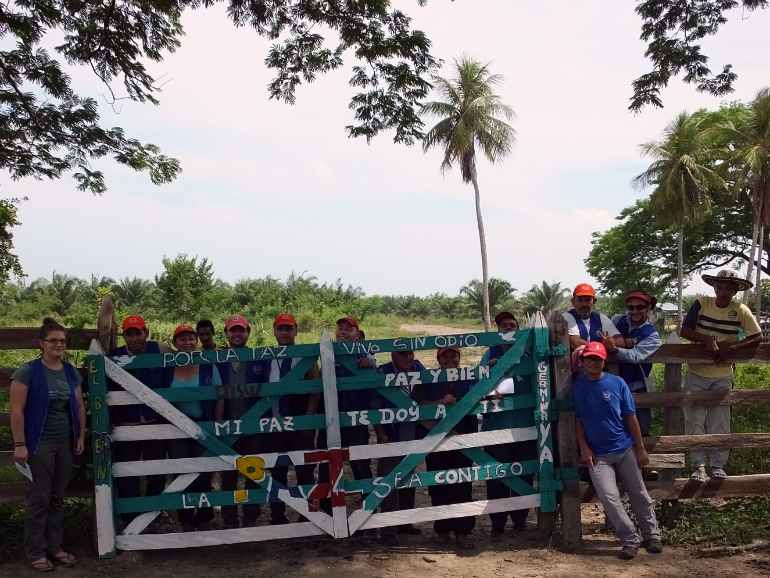