[Note: The following has been adapted for CPTnet. The release on CPT Colombia’s blog contains a gallery of photos showing in more detail the events of the day.] 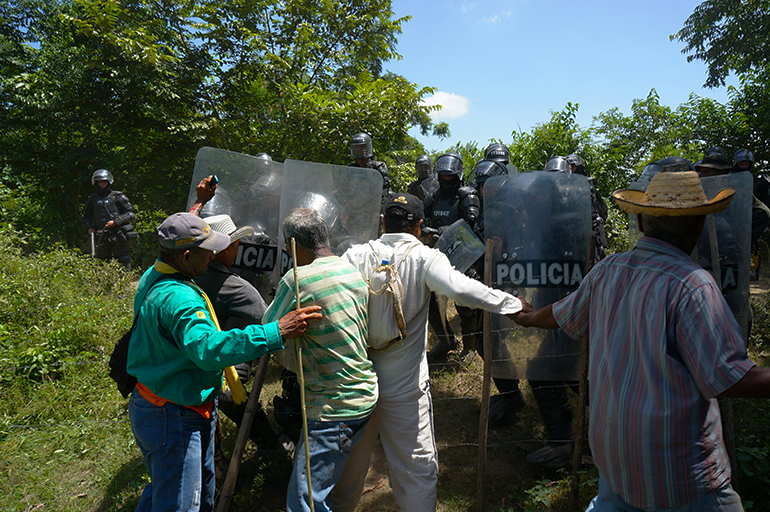 On Thursday
26 June, forty-five riot police, led by Leonel Gutierrez Lagares, Inspector of
Police of Vijagual, raided the house of Henry Rincón Rinel, a school teacher in
El Guayabo.  After four attempts at eviction over the last year, Inspector
Gutierrez Lagares, with only eighteen hours notice, ordered the surrender of Rincón’s
house.  Riot police entered the
property, using fifteen tear gas canisters within the span of seven to ten
minutes to disperse community members who had gathered to protect the house and
take control.  During that time, riot police caused injury to several
community members including severe reactions to the tear gas, lesions, and
blows to the body.  The community remained peaceful during the eviction
and members were surprised by the police violence.

Take Action: Sign the petition and write to the community.

Eric Payares, a community leader from
El Guayabo, said that on Thursday, shortly before the riot police arrived, that
“what happens here today is the responsibility of Mr. Gutierrez Lagares, Police
Inspector of Vijagual.”  Mr. Gutierrez Lagares carried out this eviction
without a court ruling regarding the land in dispute, without sufficient notice—the
eviction letter arrived in El Guayabo only eighteen hours earlier—and lastly,
by taking advantage of a second eviction ordered for that same day in El
Guayabo.

Rodrigo
Lopez Henao, who claims to be the landowner of the farms in El Guayabo, has terrorized
the community since 2009 in a legal battle attempting to displace the families
who have been using the land for subsistence farming since 1986.  The land
which the Guayabo farming community is struggling to protect is divided into two
sections, Altamira and San Felipe.

Mr.
Lopez Henao arrived on Thursday, 26 June at 9:00 a.m. at Altamira, accompanied
by his lawyer, associates, a representative from the mayor’s office of Puerto
Wilches, the Inspector of Police in Puerto Wilches, and forty-five riot
police.  After hours of discussion between lawyers, the authorities agreed
to postpone the eviction of Altamira  on the grounds that it was illegal and arbitrary.

The
Guayabo community celebrated with shouts of joy and songs of praise.  But
the celebration was short-lived, when community members realized that Leonel
Gutierrez Lagares used the threat of eviction for Altamira as a distraction
from the raid he had ordered for Henry Rincón Rinel’s house.  As soon as
the Inspector of Police of Puerto Wilches declared the Altamira eviction
postponed, the community had to run twenty minutes north in order to protect Rincón’s
house from eviction, but the riot police eventually violently took possession
of it and land that community members farmed.

CPTers
Hannah Redekop and Sarah Sommers were present in El Guayabo on 26 June.  Redekop reflected, “It was so
frustrating to watch a beautiful celebration in which a community gathered to
praise God for his protection turn so quickly into a violent attack by the
police against that same community.
Unfortunately, Colombian law continues to favour the rich landowners
while the victims of the conflict are revictimized.”