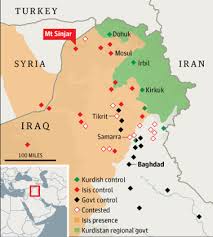 CPT Iraqi Kurdistan, together with Wadi and Alind organizations, spent two days
with the Yazidi people who fled the terror of the Islamic State (IS) forces in
the areas of Shangal/Sinjar.  We
visited two IDP camps in the Duhok governorate and interviewed over fifty
displaced people, who lost their relatives in IS attacks.  (The militias killed the men, kidnapped
and raped the women, and many children and elderly died of dehydration and
exhaustion as they fled.)  The
Yazidis spent a number of days on the mountain and in the semi-desert with very
little food or water under the intense summer heat.  The conditions they face in Iraqi Kurdistan are difficult
and far from sufficient.

Seeking for ways to better respond to this crisis, we are sending out an urgent
call to action to the international community.

Please read it and share widely with your contacts.  Thank you very much.

Representatives of three human rights non-governmental organizations
(NGOs), a German-Kurdish organization Wadi, a North American-based
international organization Christian Peacemaker Teams (CPT), and Duhok-based
Alind Organization, conducted a two day visit on 15 and 16 August 2014 to areas
in the Duhok Governorate of Iraqi Kurdistan where Yazidi Iraqis who fled the
violence of the Islamic State (IS) forces from the Shangal (Sinjar) area are
now staying.  The representatives
spoke with an official at the Peshabur (Faysh Khabur) Iraqi-Syrian border
crossing, who estimated that since 5 August more than 100,000 people have
entered seeking refuge.out their future.  The majority of the interviewees said they feared to stay in
Iraq and wanted to emigrate to Europe, the U.S.A., or Canada.

The representatives observed Yazidi families camping out under makeshift
tents along the roads throughout the area, under highway overpass bridges, or
in the open sided concrete buildings under construction.  They visited the displacement camp for
an estimated 2,000 people (no official numbers given) in the Khanke
municipality near the town of Semel, and the Bajet Kandala Refugee Camp, near
the Peshabur crossing.  At these
camps, they spoke with over fifty displaced persons.  Those interviewed shared many common experiences.  Families reported men in their family
killed and women raped or kidnapped by IS forces, escaping to Mount Shangal,
watching relatives die for lack of food and water and suffering extreme heat
exposure.  They appeared deeply
traumatized, and spoke of shame and despair about their future.  The majority of the interviewees said
they feared to stay in Iraq and wanted to emigrate to Europe, the U.S.A., or
Canada.

Khanke camp has been set up on a field next to a small town to care for the
rapid influx of the displaced Yazidis.  More than 100 white UNHCR tents are spread around the field.  People sat in the shade of the tents on
cardboard or dusty mats.  A local
organization has delivered mattresses to a small portion of the residents.  There were no water systems for
consumption or bathing near the tents.  Residents hauled water in buckets from a local school, but
had bottles of water for drinking.  According to the residents, the camp had only two latrines.  Local people of the town served the
residents of the camp a warm meal about 5:00 PM, consisting of rice and bulgur
wheat.  Apart from one police car,
the NGO representatives saw no security system for the camp, which might put women
and children, especially, at risk of abuse.  People are in dire need of sufficient sanitation, food,
vitamins, and medical attention as well as administration and security.

Bajet Kandala Refugee Camp, situated just several kilometers from the Peshabur
border crossing, was meant to serve as a reception/transit camp for the Syrian
refugees.  In an older portion of
the camp, the visiting human rights workers saw canvas shelters, electricity,
latrines, and water spigots.  The
other part, filled with several hundred white tents, was not finished.  Residents of the new part, mostly
families, had to cross a highly trafficked road to the older camp to haul
buckets of water and get a tray of what appeared to be subsistence amounts of
cooked food, mainly rice.

According to the administrator of the camp, a representative of the Kurdish
Regional Government (KRG), around 20,000 people resided there as of 16 August.  The camp is run by a KRG-related agency
that appeared to be overwhelmed with the numbers of people already present and
those arriving at the camp daily.
A fifteen-member family sitting under a makeshift shelter at the side of
the camp told an NGO representative that they had not eaten for three days.  No international aid agencies were
present at the camp.

Wadi, Christian Peacemaker Teams and Alind, as international and Kurdish civil
society organizations, call on the United Nations and all international aid
agencies, government and non-governmental bodies to

HELP THE YAZIDI PEOPLE OF SHANGAL!

The Kurdistan Regional authorities, along with local communities, are doing
much to provide help for those in need, but the region is overwhelmed by the
enormity of the influx of the hundreds of thousands displaced Yazidis,
Christians, Shabaks, Turkmen, and others fleeing the horrific violence
perpetuated by the Islamic State forces.

We ask the Iraqi government to act quickly and provide financial support from
the central budget and try to find and release the missing persons, especially
the women, remembering that Iraq signed resolution 1325 UNSCR in 2013, which
calls on governments to protect women and children in conflict.

We urge the UN and other aid agencies to act quickly to provide necessary
infrastructure to meet basic needs for the displaced—inside and outside the
camps—such as food, sufficient sanitation systems, medical care, and protection.

We urge nations of the world to open their borders for those displaced by
violence and to provide a process for them to immigrate and the financial and
legal assistance needed.