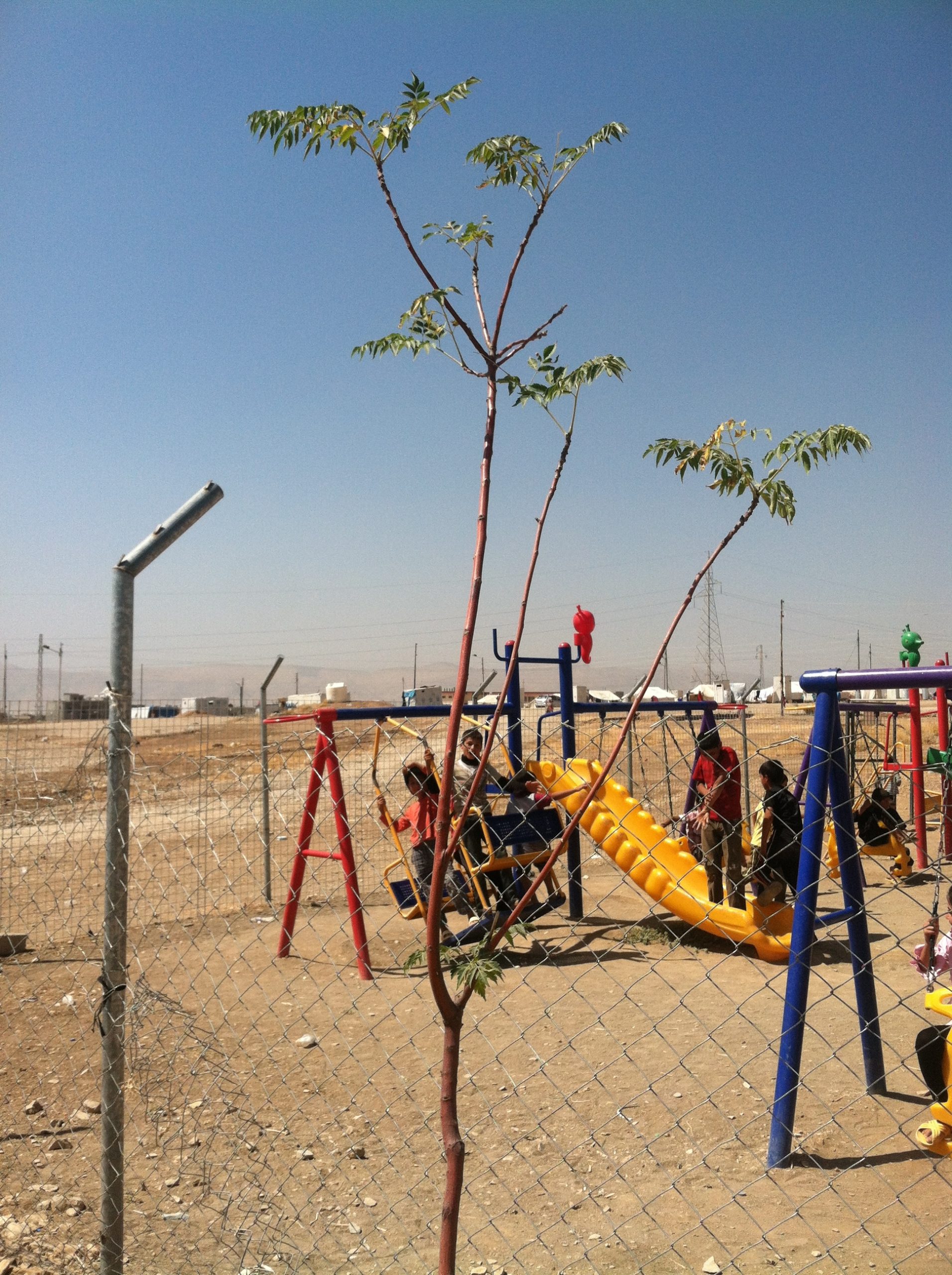 This morning, outside a playground full of brightly colored
swings and slides in a camp for internally-displaced people in Arbat, Iraqi
Kurdistan, I saw a tree.  Actually,
four trees.  Four tiny trees, not much
taller than me, planted by local NGO workers who were concerned about the
children not having any shade in the summer heat, which can top 44C.  I don’t know much about plants in
Kurdistan, but I can guess that trees growing in rocky, parched clay in a high
semi-desert do no grow very fast—it will be years before the trees can provide
good shade.

These children—Yazidi and Arab Muslim—have only been playing
here for a month.  Their families
live in different parts of the camp, sectioned off by ethnicity and religion.  The camp itself used to house Syrian
refugees until a new camp was built for them.  Iraq is near the top of the list for most IDPs and refugees,
with over a million people fleeing violence in Syria,
Iran, Turkey, Palestine and over two million more fleeing ISIS or remaining
displaced after the U.S. occupation—all fruits of the tree
planted by the U.S. War on Terror.

Today is September 11, a fact I did not remember until my
teammate mentioned it this morning.
I doubt any of these children know the significance of this day to
people (like myself) from the U.S.
But they know the terror of September 11, 2001, a terror re-enacted by a
traumatized United States in Afghanistan and Iraq, in Yemen, in Pakistan, and
around the world.

Others have remarked that violence is the simplest form of communication—it does not
require understanding about the other person’s worldview or opinions.  The War on Terror has never cared about
the real complexity of the lives it has destroyed (be they Taliban fighter,
Iraqi civilian, or U.S. soldier).  Instead,
we have sought to rain terror on those who we blame for our insecurity and
trauma.

Our willingness to destroy a nation, with little more justification
than to prove
our masculinity and use a crisis to open up Iraqi oil fields, has planted seeds that will far outlive the careers of U.S.
politicians and oil profiteers.  For
Iraqi people devastated by years of dictatorship and sanctions, for Kurds oppressed and manipulated for decades, and for Yazidis and others who have lived through centuries
of oppression, the U.S. occupation manufactured and escalated
sectarian violence that continued to burn long after U.S. troops left the
country.

There is something deeply disturbing about planting a shade tree
in an IDP camp.  It says that we do
not expect this violence, displacement, and

trauma to end any time soon.  It says that the U.S. bombs of today
may defeat ISIS (and most Kurds I talk with are very happy about U.S.
involvement), but they will not heal the wounds caused by the U.S. bombs from
yesterday.

There is also something hopeful about planting a shade tree
outside a playground in an IDP camp.
It says that we will not abandon our children to suffering without
relief.  It says that Kurdish
communities know war and violence, and they will not be defeated.  In the United States, we sometimes plant
trees in memory of those who have died; in the semi-desert outside of Suleimani,
trees are planted for the strength of the living.

The meaning of September 11, 2001 changed for me when I met
people who grew up in Manhattan and remembered the shadows of the planes, the
ground shaking, the dust, and the funerals.  Today, my understanding changed once again, meeting people
still living in the nightmare created by the U.S. reenacting the trauma of 9/11
around the world.

Today, here in the Tigris-Euphrates watershed, I saw a
commitment to long, slow, and incomplete process of healing.  Four tiny trees.  Children on swings.  I cannot help but think of the words of
Archbishop Oscar Romero, said shortly before he was killed for supporting the
El Salvadoran resistance to U.S.-funded violence.

This is what we are about: We plant the seeds
that will one day grow.  We water seeds
already planted, knowing that they hold future promise.  We lay foundations that will need further
development.  We provide yeast that
produces effects far beyond our capabilities.

We cannot do everything, and there is a sense
of liberation in realizing that.  This
enables us to do something, and to do it well.  It may be incomplete but it is a beginning, a step along the
way, and an opportunity for the Lord’s grace to enter and do the rest. I pray that we who live in the heart of Empire may have the
strength to begin healing our nation and support the healing of all others.  May we plant and water shade trees,
holding the horror and beauty of this world as we work for a new one.