COLOMBIA: Communities around El Guayabo establish a “Space for Peace and Non-Violent Resistance against Dispossession.”

On 14 November, seventy community members of Guayabo
established a space for peace.  The
women led the march, flying banners and singing, setting up camp around the
house currently occupied by Rodrigo López Henao’s men since the eviction of 29
October 2014.

Since the occupation of the property, López Henao’s  men have destroyed about 100 plantain
trees.  The community began
replanting the trees with recovered sees on 14 November.

The community intends to remain on the land surrounding the
house until their situation is legally resolved and the authorities return
their land to them.  Through the
below declaration of a space for peace and their commitment to nonviolent acts
of resistance they hope to make their situation more visible. 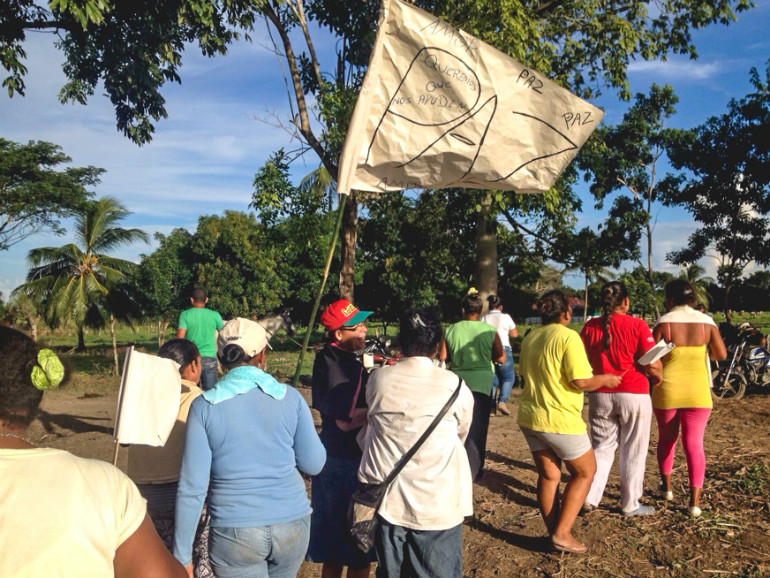 Rural communities of
Guayabo, Bella Union, Central, and surrounding areas declare a “Space for Peace
and Non-Violent Resistance against Dispossession.”

We, the farming communities of El Guayabo, Bella Union,
Central and surrounding villages declare ourselves in a “space of peace and
non-violent resistance against dispossession” because of the abuses and human
rights violations that have been committed against our lives and integrity.  The continual human rights violations
are carried out with the purpose of robbing us of our land and territory that
we have occupied and worked for over twenty-eight years.

Mr. Rodrigo Lopez Henao has continued with his atrocities
using the police to evict the rural families from the land that does not
legally belong to him.

In 2002, Mr. Lopez Henao came to El Guayabo accompanied by
armed men of the United Self Defense Forces of Colombia (AUC) threatening to
take over the land and extorting 10,000 pesos per hectare of land and 20,000
pesos per head of cattle.  Mr.
Lopez Henao made irresponsible remarks to the community, pointing out and
accusing us of being guerrillas.  Faced
with this threat, a member of the community, Alfredo Reyes, spoke saying, “you
are more guerilla than us because you have guns.”  As a community, we intervened to prevent paramilitaries from
killing him.

In 2012, Mr. Lopez Henao reappeared in the region with the
same threat to take over the land.  On 12 November 2013, the Police Inspector from Vijagual, in
the municipality of Puerto Wilches, ordered the eviction of the house of
professor Henry Rincón Reinel.  The
community joined in a peaceful action with Christian songs and banners with
messages of peace in solidarity; the authorities did not carry out the
eviction.

On 26 June 2014, Puerto Wilches authorities represented by
the Police Inspector of Vijagual, the municipal public defender, and the family
commissioner executed the eviction of Professor Henry Rincón Reinel’s house.  As a peaceful community, we were
present at the site singing songs and praises but were trampled as criminals by
riot police forces with tear gas and several people were beaten.  Mr. Lopez Henao broke the lock using
force and took possession of the house leaving four men to live there.

We decided to talk to these men, some of them acquaintances,
and we invited them to vacate the house.  They agreed, and when we helped them carry out their
belongings we realized they had guns wrapped inside a mattress.

On 29 October 2014, the Police Inspector ordered another
eviction of Professor Henry’s house.  Mr. Lopez Henao left ten people to look after the house.  Also about fifteen members of the
National Police accompanied these people for three days.

On 30 October 2014, Mr. Lopez Henao’s men were accompanied
by police when they knocked down a fence and encroached on the neighboring farm
of Mr. Jhon Fredy Caceres.  When we
intervened as a community, Captain Garzón replied that The Boss had given the
order to move the fence.  Thanks to
the intervention of several organizations, Colonel Gonzalez, the Police
Commander for Magdalena Medio, ordered that the fence was returned to its
original site.

Since 29 October 2014, we have seen Mr. Lopez Henao’s
workers destroy food crops threatening the food security in our community.  We also have knowledge that Mr. Rodrigo
Lopez Henao wants to evict the sixty farming families from the San Felipe and
Altamira properties to plant oil palm.
That would threaten not only our food security, but also that of the
municipality of Puerto Wilches and Magdalena Medio.

Given these facts of violations of our human rights and
threats to food security, life and our integrity, we have decided to declare
our farming families in a “space of peace and non-violent resistance against
dispossession” for the right to land and territory until our situation is
legally resolved and they return our land.