[Note: The following has been adapted for CPTnet. The original is available on
CPT Colombia’s website.]

Over
a decade ago, the campesinos of Micoahumado made international headlines
when they engaged in dialogue with three armed groups whose fight landed them
in the crossfire: the ELN (National Liberation Army), the Colombian military,
and the government-supported right-wing paramilitaries.   The
dialogue–facilitated by the Catholic Church–was an almost unprecedented step
towards reducing violence, promoting peace, and recovering civilian autonomy in
the region. All three groups agreed to refrain from engaging each other in open
combat in areas populated by civilians, and not involve civilians in their
wars.  The ELN further agreed to remove existing landmines and refrain
from planting new ones on Micoahumado’s lands and roads.

For
the past decade, Micoahumado’s peaceful strategies had been working. Until
recently.

Just
the other week in a place not too far from Micoahumado, a fourteen-year-old
boy, walking in the fields, stepped on a landmine.  The landmine’s
explosive force tore his limbs from his body, killing him instantly.  Soon
after, in Caoba (one of the ten communities that make up Micoahumado), a
farmer’s cow grazing in the field wandered over a landmine. The loss of the cow
was a severe blow to the farmer’s livelihood. In addition to the landmines
there is now also increasing Colombian military presence in populated areas.

In
the face of these re-emerging threats, the campesinos of Micoahumado are
reaffirming dialogue as the most effective path to peace.  And they have
requested that Christian Peacemaker Teams (CPT), an international organization
that sends teams of peace workers into conflict areas around the world,
increase their accompaniment of Micoahumado.

In late January of this year, joining CPT’s
permanent Colombia team was an international delegation from the Mennonite
Central Committee, whose members work for relief, development and peace in
Colombia and Ecuador.  The delegation arrived in Micoahumado in the middle
of this unexpected and tense situation.

The
delegation was present when the community gathered to discuss a unified
response to the presence of landmines. In keeping with the Community
Sovereign Process for Life, Justice and Peace in Micoahumado, the
discussion was opened by reaffirming, “We believe in the value of words.
We believe in dialogue as the path to peace.  We cannot have peace
if we do not dialogue.”

During
the visit, two days after this meeting, the Colombian military showed up and
set up camp on the edge of town, adding to an already difficult situation.
The community adamantly denounced their presence as an affront to their
sovereignty and their safety. Community representatives, accompanied by CPT,
went straight to the army commander to ask respectfully, but forthrightly, that
they set up camp elsewhere, away from the civilian population. The commander
responded civilly that he would radio his superior for orders.

In
the evening, on the last day of its visit, after negotiations with the army, the
delegation gathered together with the community for a meal.  Gifted
members shared songs they composed, singing of their resisting displacement
from their beloved land.  The delegates performed a spiritual act of
solidarity and pastoral accompaniment.  Drawing inspiration from the “Lord’s
Prayer of Guatemala” by Julia Esquivel, they composed and performed a version they
called the “Lord’s Prayer of Micoahumado.”

Dwelling in the Spirit of peace, let us accompany the campesinos
of Micoahumado—and all those who suffer the violence of war and chose the path
of peace and dialogue.

And, let us pray with them:

Our
Father
Who is in heaven
Your name is hallowed
Let your kingdom come,

Because when your kingdom comes,
there is safety for everyone,
and there is no fear of walking on your earth.
There is respect for autonomy, recognized everywhere.
That the land is cultivated for the purpose for life,
and never ever for the purpose of war and death.

Let your will be done, Lord,

That there is freedom for all,
that the yoke that oppresses the community be broken,
Your will is the proclamation of the Gospel to the poor,
comfort for the afflicted, for all those who have suffered
war, landmines and injustice. 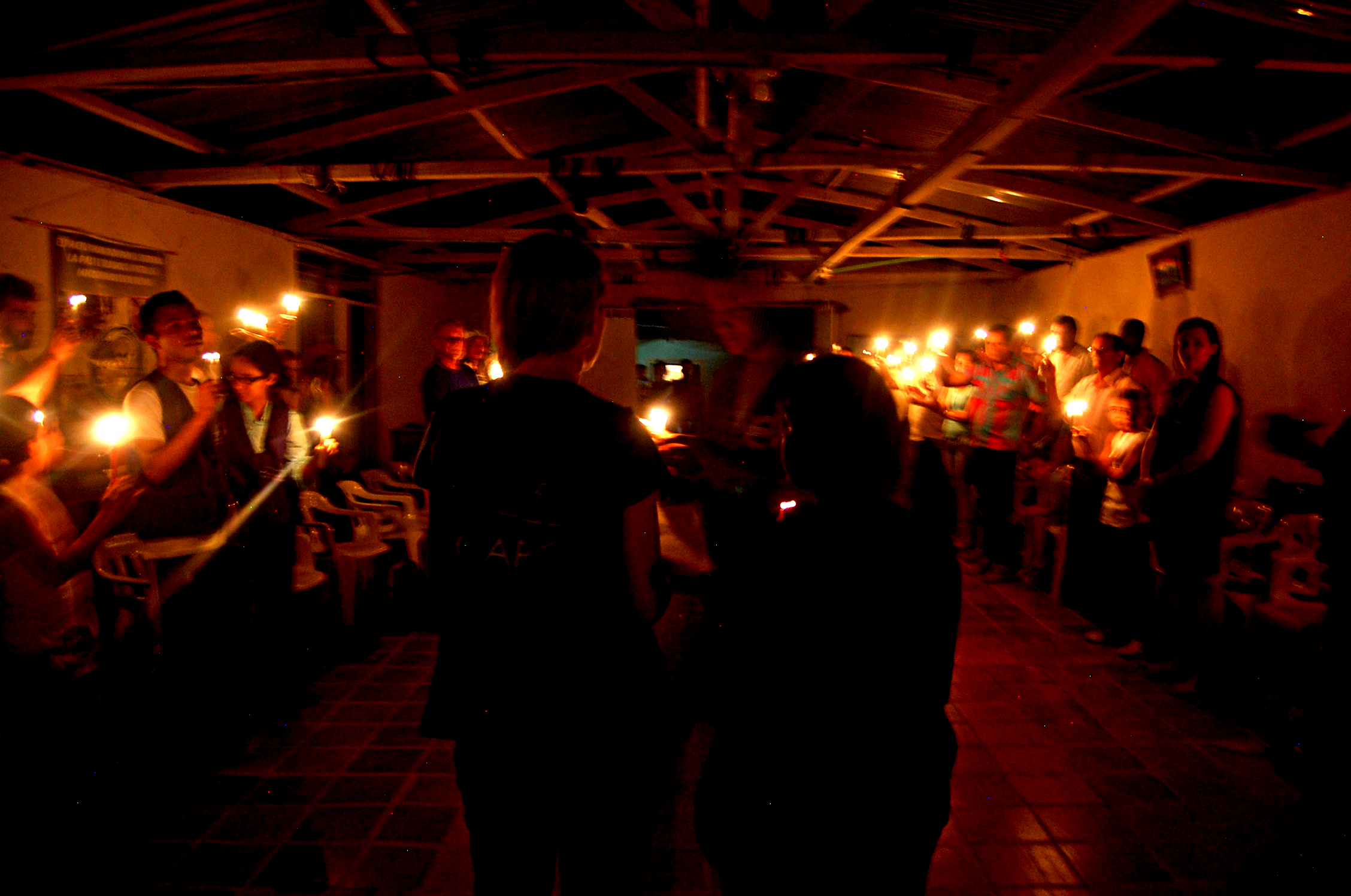 Give us this day our
daily bread,

our bread that is being able to walk in the field
without a landmine killing us.
The bread of medical care
and education for our people.
The bread of living in peace and tranquility,
without the threats and fear that afflict us and prevent
the welfare of our community.

And forgive us, Lord,

for not knowing how to share the bread that you have given
us.

As we forgive those,

who have taken from us your bread which is ours.

And lead us not into
temptation,

But deliver us from
evil,

from antipersonnel mines that kill our people
and destroy our livelihood,
from the threatening forces working in the dark
that seek to destroy our way of life,
from the division manifested among us
as a result of fear and hopelessness
weakening our unity.

CPT’s
Colombia team cannot take on new accompaniment requests without your
support.  Donate now.  Join a delegation to
Colombia to meet the campesinos who are promoting peace in their regions.