A group of thirteen women from different Christian churches
and organizations working in human rights and peacebuilding in Colombia joined
a Christian Peacemaker Teams’ (CPT) delegation during Easter Week of 2015, and
we may have encountered some angels in the process. This delegation focused on
the accompaniment of the campesino community of El Guayabo,
part of the municipality of Puerto Wilches, Santander, Colombia.

This community comprises approximately 250 families who have
lived in the region on the banks of the Magdalena River for more than
twenty-eight years. Since 2002 they have struggled for their right to remain in
the territory, resisting unlawful eviction on the part of the national police
and military forces who have conspired and aligned themselves with a man who
declared himself owner and inheritor of these lands, without ever having lived
there.

To reach Guayabo we travelled up river by boat from the port
in Barrancabermeja for two-and-a-half hours down the majestic, although
contaminated, Magdalena River. Upon arrival to this beautiful community we were
received by a group of people, including girls and boys with banners of welcome
and biblical texts. Their smiles, joy, and ruckus reminded me that I was upon
sacred ground, inhabited by people with dreams and hopes. I felt that angels
were receiving us, affirming and celebrating our arrival in this sacred
territory; a token of His presence and ongoing support of this community, and
of us during these days that we call “Easter/” We were in a “holy place”–in
sacred territory. And I say ‘sacred territory’ because the people that live
there are campesinos: men, women and children who are fighting for their land,
which is to say that they are fighting for their lives, because for campesinos
land is life, and life is sacred. Sacred also because the community was still
mourning the loss of three of its members who had departed this earth due to a
boat accident. 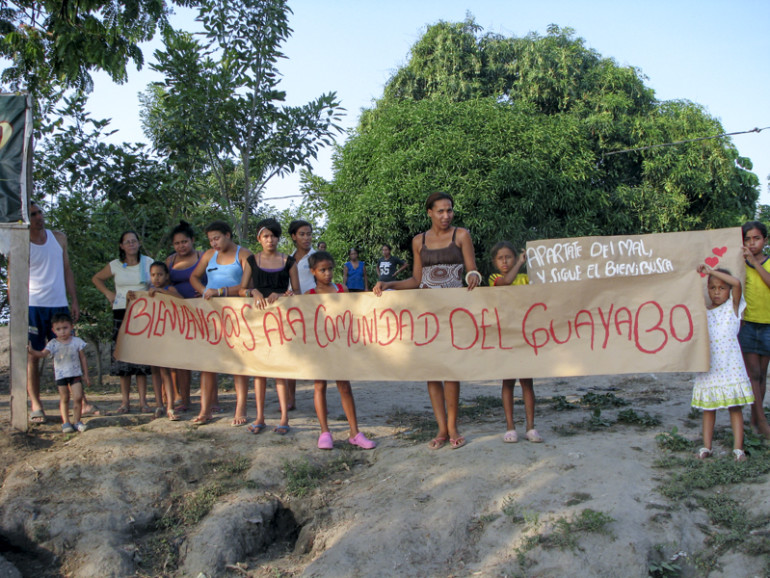 Together with the community we organized two events: a
public prayer and a procession through the town of Guayabo, ending with a
liturgy, where we exorcised fear, disunity, hatred and desire for vengeance, to
make way for harmony and unity in one common struggle.

On Holy Thursday, community leaders requested CPTers’
accompaniment while they plowed the land to plant corn, so the two CPTers
leading the delegation accompanied them. At one point the man who is after
these lands began to hurl a series of insults at the campesinos and the two
CPTers, but a particular phrase stuck out. He shouted: “Where are the sixteen
blue vests* which
came yesterday?” The total number of delegates wearing blue vests was actually
fourteen during a prayer action we held in front of this man’s house the
previous day. But according to divine mathematics this man saw sixteen blue
vests. His mistake reminded me of 2 Kings 6:17, when the King of Syria sent
armies with a cavalry and chariots besieging the city and its inhabitants. When
the servant of the prophet Elisha sees this he asks, “Master what do we do?”
And Elisha answered; “Do not fear, those who are with us are more than they.” I
believe that this man’s eyes were opened to see something we couldn’t (though
we had felt it).

How I would like him to read this! Because this was a divine
manifestation and for him an epiphany. He was allowed to see beyond, to
understand that his quarrel is not with the campesinos in El Guayabo, but
literally with God.

How I would like him to understand this! That this epiphany
is telling him that although God loves him too, God is not in agreement with
his methods; that is to say, with him aligning himself with the powerful, with
the strong, in order to strip and humiliate the poor, who are in reality his
brothers and sisters, not his enemies. God is, and always will be, in favor of
those who suffer and experience persecution, exclusion and dispossession.
Because how we treat our brothers and sisters, good or bad, is how we treat God
(Matthew 25:40).

Could it be that this man knows this? Could it be that he
realizes that his fight is with God? That God is on the side of those who cry
out for justice, on the side of campesinos who are fighting for life, for land?
Was he, like the servant of Elisha, allowed to see with different eyes? To see
sixteen blue vests? Could it be that the angels, in this act of solidarity,
placed additional blue vests? I deeply hope that he understands this; that what
he is fighting for and claiming does not belong to him. That his fight is not
with the campesinos of El Guayabo, but with God, his creator, his maker, who
also loves him. And finally, I believe that yes, in divine mathematics fourteen
can become sixteen. Or more!