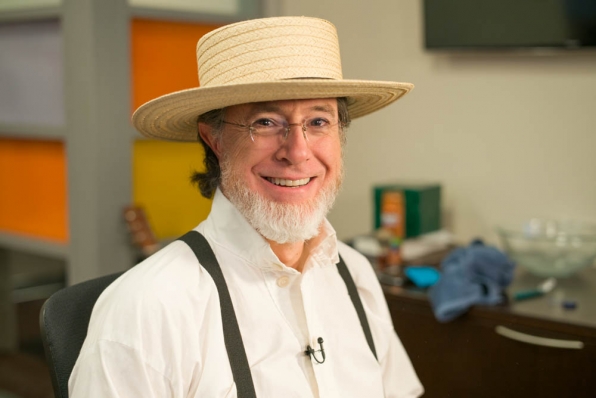 The terrorist attack on black Christians at prayer in Charleston’s
Mother Emanuel Church has left many white Christians asking what they can do to
support their black brothers and sisters.

“Stop white people from killing us,” has been the
overwhelming response.

Another response has been that they want the Confederate
flag on the Columbia capitol grounds to come down.

Accordingly, Christian Peacemaker Teams (CPT) is calling on
Stephen Colbert as a native white Christian son of South Carolina—who marched
in solidarity with his martyred brothers and sisters in Charleston on Sunday—to travel to Columbia and take down the flag in any way he sees fit.

CPTers have accompanied people working for social change in
zones of lethal conflict spanning the globe: peasants resisting displacement
from their land in Colombia; refugees forced from their homes by ISIS who are
building relationships with people outside their ethnic groups; Palestinians
living under Israeli military occupation and Indigenous communities fighting
multinational exploitation of resources on their traditional lands.  They are more than willing to accompany Colbert
to South Carolina to help him respond in a very small way to what black
Christians are asking of white Christians.

The new Late Show will have so many
surprises for you! For me, too. I tend to nod off during meetings. #LSSC

and suggests that Colbert has a lot of free time between now
and September 8, when his show debuts.

As Christians it is our job to exhort and encourage our
brothers and sisters in in the Body of Christ.
Brother Stephen may be reached