“These are my fields and these are
my guests”, fourteen-year-old Ibrahim spoke boldly to the security guard
who blocked the way leading to the oil field near the tiny Kurdish village of
Haji Ahmed.  He and his younger brother Zaid sat on the bus with CPT
delegates waiting to be able to look at their vineyards as well as the oil
exploration site.

As we planned the visit, we had
discovered that our friend, Kak Mirro, was serving his military time on the
front against ISIS but his teenage sons were quite willing to show us around.
We knew that the bus would not be able to navigate the tortuous farm road and
so we wondered how we would be able to overlook the fields. However, we were
very surprised when Ibrahim guided the driver onto the paved road and up to the
guard cabin with the barrier stretched across the entrance to the oil field
that had once been the village’s land. 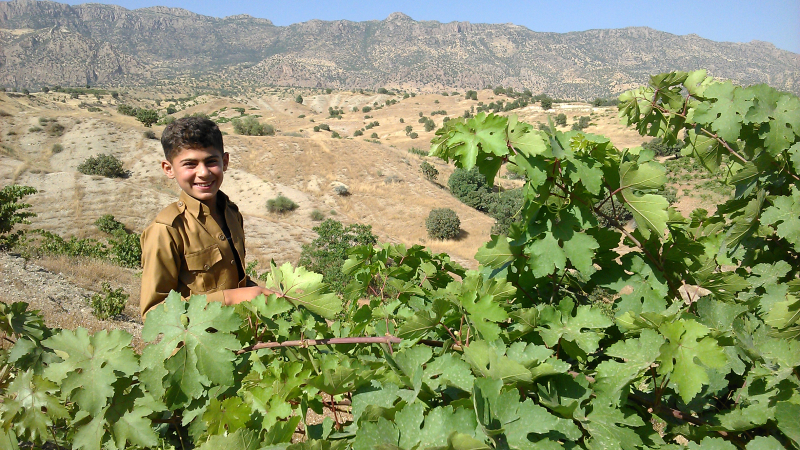 The discussion began with Ibrahim’s definitive statement.
There seemed to be no doubt in his mind that he had the right to show his
guests the land and crops.  Finally after much conversation and an
obligatory scribing of all our names, the guards allowed the delegation to
pass. Ibrahim and Zaid were grinning from ear to ear and did not stop until we
had passed the exploration site and moved on to the vineyards covered with
small green, unripe grapes.

CPT Iraqi Kurdistan has walked alongside the members of the
village Haji Ahmed since 2013, when we heard word of their resistance to Exxon
Mobil’s oil exploration activities. We created a video, Voice of the People, telling
the story of the villages nearby the site. CPT has raised the voices of the
villagers by bringing media attention and accompanying their visits to
parliamentarians and government officials. We have watched the oilrig
activities, from afar, with the boys’ father, Kak Mirro, many times. This day
we witnessed the firm resolve of the next generation.

As we passed the deep excavations
of the site we noticed that the tall drill was dismantled and gone. Huge white
plastic tarps covered the mound and the only people there, other than us, were
two guards in small huts. We don’t know what the next step is for the
extraction. We know that they have struck oil. We assume that the crude will
wait underground until the time is right to begin work again.

These young men know very well how the
oil has affected life in their village. They showed us the damage to fruit
trees caused by the extreme heat of the burning gas, three months earlier. They
have smelled the oil reek that has permeated the valley. They have sat through
many meetings with the villagers and CPT discussing next steps and strategies.
Now, they have taken on the task of resisting in the way that is available at
this stage. They brought a busload of twelve foreigners and three Kurds to the
fields that represent their livelihood. They insisted and succeeded. That is
resistance.