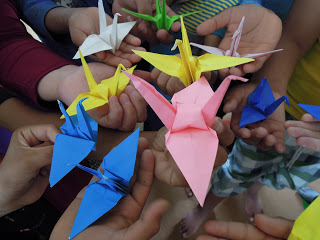 Children far from home in
a desolate environment.  Caring volunteers
who want to make their lives a little brighter and more colorful.

On 26 April, CPTers
Marcus Armstrong, Chihchun Yuan and some of the youth of Arbat camp spent one
and half hours doing Origami in an activity organized by the workers of STEP.

Some young people, mostly boys, had hands that
had done hard labour, and initially the delicacy needed for Origami was a
challenge. They learned quickly and soon everyone had made a beautiful crane
and had written his name on it. Each was a unique work!

After a small exhibition of the various cranes, the young boys initiated a
second round of origami— this time teaching Marcus and Chihchun how to make a
boat, plane, camera, and tricks. They really enjoyed being teachers and sharing
what they could make.

Today the teenager’s hands were doing Origami in a camp. In the future they may
be shepherds tending their flocks, mechanics fixing cars and machines, chefs
making delicious food, and many other things.

“Their hands will be
handy for everything, and everything they touch will be what they love” is a
prayer for today.

The STEP workers organize
activities from toddlers to teenagers.   Many of those working with the young people
are IDPs themselves. Their gentle minds, eyes, hearts and voices have created a
peaceful environment for the children to rest, share, have fun and be
nourished.

Please note – for
security reasons we could not show the faces of the young people.