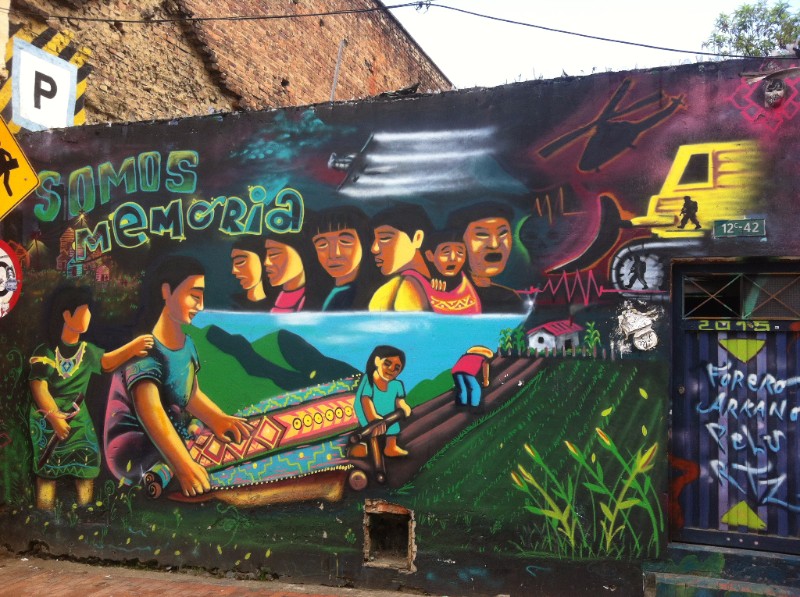 Almost every year since August 2013 farmers in
Colombia have taken to the main highways to demand guarantees from the
government necessary to cultivate their land and thus maintain a livelihood to
support their families; the campesinos, Indigenous people, and Afro-Colombians
are not only demanding respect for their territories but also calling for a
revision of national policies that currently threaten the development of the
rural sector.
These mobilizations are supported by several sectors including students,
healthcare professionals, teachers, religious groups and unions, which in turn
represent an array of issues affecting the vast majority of the population.

The increase in prices of agricultural products for crop
development and sustainability; the decrease in the market value of products
produced by the campesino farmers (in most cases the market value is less than
production costs); the ban by the government on the use of local crop seeds forcing
the purchase of foreign seeds (all of which falls under the various free trade
agreements Colombia has with other countries); and the national development
plan for mega projects focused on crops and mining make it increasingly difficult
to live in the rural sector. These factors facilitates the displacement of
campesinos, indigenous and Afro-Colombians to big cities where they suffer from
hunger and pain.

The government has not been able to guarantee all these
sectors their respective rights and has failed to comply with the agreements
made with any of them. This situation creates uncertainty and people have
decided to organize to demand from the government the following points:

In short, the demonstrations are a representation of the
plurality of Colombia where all voices have united to demand that the
government respect life and provide guarantees for a dignified life in their
territories.  As Christian Peacemaker Teams, we join our voices to the
requests of campesino, indigenous and Afro communities as part of our
commitment to building relationships to transform violence and oppression.

We ask for prayer that God of the heavens fill with hope the
hearts of all those who with their lives are building the kin-dom of God on
earth, where peace, love and justice are the reflection of God’s love.