LESVOS REFLECTION: Moria is Like a Prison; asylum seekers face unjust and inhuman conditions in the government run camp.

LESVOS
REFLECTION: Moria is Like a Prison; asylum seekers face unjust and inhuman
conditions in the government run camp.

“Moria is like a prison” stated a Kurdish refugee at a
demonstration outside the camp. This is a phrase that nearly every refugee I
meet and talk with on Lesvos says. “Moria is like a prison” I hear again as I
walk alongside the four meter tall fence lined with razor wire, riot police on
my other side. As I walk with a resident, or rather a prisoner of Moria, he explains
to me the human rights violations and ill treatment of refugees by Greece and
the wider European Union. He sleeps in a small room with nine others, receives
one meal a day, has limited amounts of water and electricity, and considers a
lucky day to be one where there is enough water available to take a quick
shower. 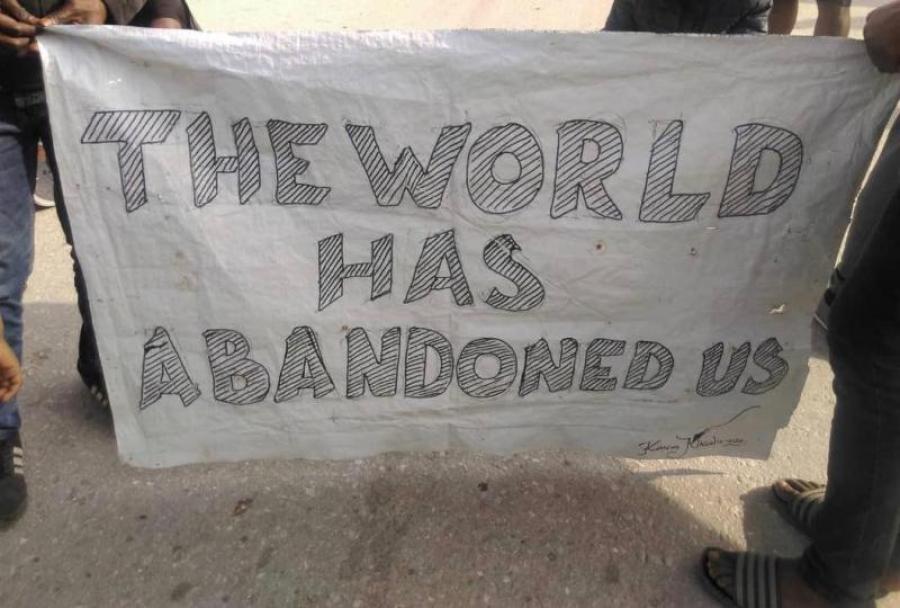 I have been on Christian Peacemaker Team Lesvos project for one
week now and been to Moria twice. Moria lies inland of the coast on the island,
where the soil cracks from little moisture and the sun’s heat makes it feel far
more like a desert than the Mediterranean. As beads of sweat role down my back,
the smell of human waste assaults my nostrils from lack of adequate sewage
installation in the camp. Technically, Moria camp is a hospitality center for
refugees to spend 25 days to be processed and begin the asylum procedures.
However, Lesvos is a small island. Refugees carry with them nothing but a few
personal possessions and the fear of death or the memory of torture from their
homeland, and in many cases they end up stuck for months in Moria with no end
in sight.

Laws and regulations for asylum processes are different for each
nationality. They change often and without notice, confusing, altering and
prolonging the resettlement process. Such changes on paper result in thousands
of refugees being forced to endure the nearly uninhabitable conditions of Moria
as they wait in limbo for the Greek authorities to process their cases. Often
the outcome is that the police force will deport the refugee back to Turkey, or
what is worse, their homeland — both of which are extremely unsafe for them.
“People have no future here,” states a Moria prisoner, who has spent 15 months
there and is still awaiting the result of his asylum claim.

Greek and European Union authorities commonly utilize intimidation
tactics. Two months ago Moria prisoners organized a peaceful protest. In the
night following the protest authorities raided the part of the camp where the
Northwest African refugees were housed and arrested 35 black refugees. None of
the refugees had committed crimes and some were not even present at the
protest. Nonetheless these 35 refugees await their hearing and face years-long
prison sentence unjustly. Court cases are still pending, but the arrests have
depleted the number of peaceful actions, causing refugees to fear unjust arrest
and deportation for speaking the truth about their lives.

Despite the harsh realities of suffering, people and organizations
do amazing work here on Lesvos. Apart from the humanitarian aid work,
accompaniment and monitoring, legal aid for refugees, also refugees themselves
mobilize and take action. They are demanding that the governing bodies, that
have the responsibility and resources to help, simply follow laws which are already
in place. There is much disparity on Lesvos, but also much hope and beauty. May
their voices and our voices unite to add to this hope.