IRAQI KURDISTAN: “We are not terrorists, not ISIS; we are sons of this town; we are with you!” 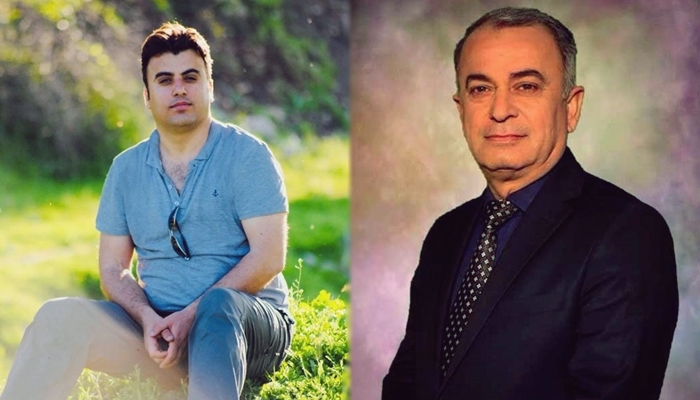 Sherwan Sherwani and Haji Rekani who were arrested during a peaceful protest in Duhok city.

On the 23 January 2019, the Turkish military killed six people in a cross-border bombing near the Kurdish town of Deraluk.  Across Iraqi Kurdistan, many shared in the devastation of the families who lost loved ones, and the attack sparked outrage against the Turkish military presence in nearby Shiladze.

A few days later, unarmed protestors stormed the Turkish military base on Shiladze’s outskirts. Press reports said the protesters took over the base and handed over captured Turkish soldiers to the local authorities. Two civilians were reportedly killed in the clash and up to fifteen were wounded. The KRG (Kurdish Regional Government) responded by accusing the demonstrators of rioting and inciting violence, and began arresting those involved, including some of the wounded civilians after they received medical treatment.

On Monday, 28 January, Duhok civil society leaders began organising a support protest for the Kurdish victims in Shiladze and calling for a withdrawal of Turkish military forces from Iraq. Christian Peacemaker Teams met with Haji Rekani, a local teacher involved in the Duhok demonstration

Haji Rekani explained how people have a growing anger towards not only Turkey but also the local government, who refuse to speak out against Turkish aggression in the region. He said that people need to work together to their human rights, although he fears that this government will not listen.

As the protestors arrived at their meeting point in Duhok on 28 February, they found the Asaish (local security forces) waiting. Haji Rekani explained how they began indiscriminately arresting people in the area.  They aggressively dragged him into a waiting vehicle with eight other people taking him to a large hall where another fifty to seventy-five people were also gathered.  More Asaish security people, many of who were wearing masks over their faces, surrounded them and ordered them to to face the wall and not speak to each other.

Haji Rekani at first refused this order and discovered that some of those arrested had not even attended the protest. “We are not terrorists, not ISIS; we are sons of this town; we are with you!” Haji Rekani tried to explain to his guards.  It was also here that he first heard of the arrest of Sherwan Sherwani and other journalists. 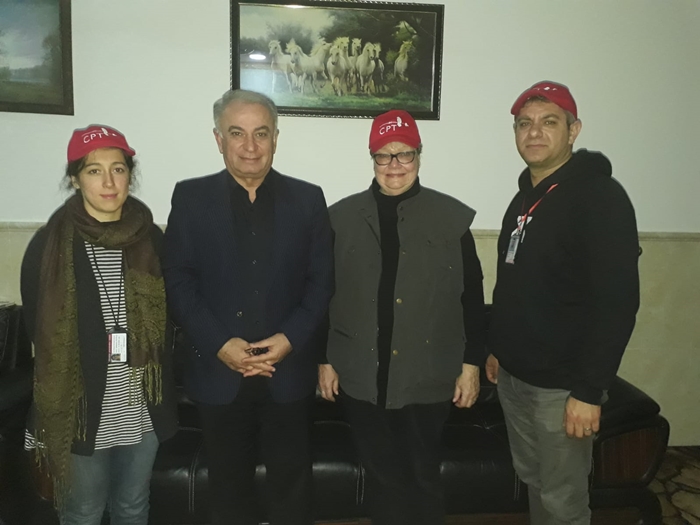 CPTers with Haji Rekani after his release from prison.

Haji Rekani and some other prisoners were released later that same day, but up to eighteen other activists and journalists, including Sherwan Sherwani, are still in prison and denied access to bail.

CPT first began partnering with Sherwan Sherwani in 2017, during the independence referendum. He is a prominent advocate against political corruption in the KRG and was calling for independence only after an end to local governmental corruption. He began fearing for his life and his family after receiving a number of threats from internal security forces and asked CPT to advocate for him and provide accompaniment. At this stage his family and other advocates are uncertain about what will happen to him after his arrest in Duhok.Until last Sunday, CPT and Sherwan’s family were not even sure where he was being held and in what condition, with some fearing for his life.

When CPT was finally able to gain access to a meeting with Sherwan Sherwani at Zerka Prison, the Municipal Police had taken over custody of him from the Asaish. They allowed CPT, as an international human rights organisation, to meet with him. However the head of the prison and another unidentified person were present for the entire interview.    They did not allow Team members to record the conversation or take photos.   They interrupted Sherwan when he began explaining why he thought he was imprisoned, and told him that he was not allowed to discuss politics with the team. Instead he told team members that he he had not been allowed to call his wife, that he did not have enough blankets and that the cells were too cold. The head of the prison put an end to the meeting after ten minutes, but did tell a guard to check the temperature of the cell.

The General Director of Police told CPT that those who were arrested in Duhok had broken the law; they were causing trouble and the police were just doing their job. However, during the team’s meeting with Sherwan Sherwani in Zerka Prison, he explained that according to the new laws people did not need permission to hold a peaceful demonstration; they only needed only to tell the media. However, he fears that if they charge those arrested under these old laws it will be under Article 156, which carries a sentence of life imprisonment. CPT supports the right of independent journalists to publish the truth without fear of reprisal from governments and other powers.