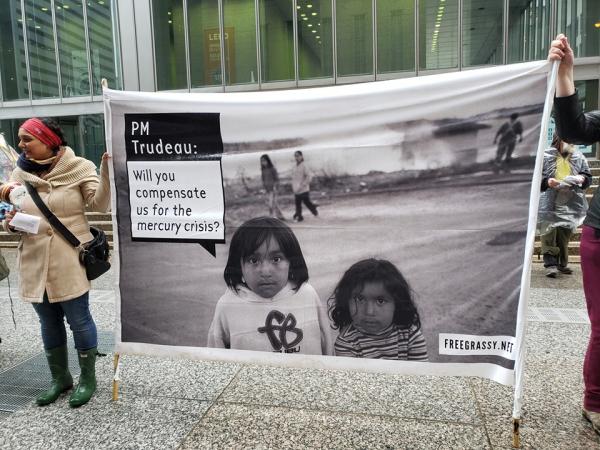 “They made a promise that we were going to have our river cleaned up and they were going to build a mercury home here for our people so that we can look after our people, and today none of that has happened…I want to make sure that there is something here that is going to take care of my community and my grandson,” the voice of Chrissy Swain was echoed on Bay Street, in downtown Toronto.

CPT Ontario stood alongside Free Grassy, on Thursday, May 9 May at a rally outside of the Liberal Party Fundraiser where Prime Minister Justin Trudeau was speaking. Protesters rallied to demand the construction of a promised Mercury Treatment Homes for mercury survivors, a promise made 500 days ago. As we made noise from across the building, Liberal supporters passed on the street as they entered the event. Meanwhile an Indigenous youth entered the fundraiser.  They were the only Indigenous person present at the event. They waited until the Q&A with Trudeau to demand justice for Grassy Narrows.  At this time, the Indigenous individual interrupted and said, “It has been 500 days since you, your government promised the community; people continue to be sick and die from mercury poisoning, and I know you care, you are a caring person. So this is why I give you this letter,” and handed Trudeau a letter from Grassy Narrows. The individual called on Trudeau to follow through on then-minister Jane Philpott’s commitment from November 2017 to build and operate a Mercury Treatment Home and Care Center to treat those poisoned by mercury.

Grassy Narrows has been suffering from mercury poisoning since the 1960s, when the pulp and paper mill in Dryden, Ontario dumped 9,000 kilograms in the Wabigoon River. Mercury poisoning impairs peripheral vision, hearing, speech, and cognitive function.  Other symptoms include muscle weakness, numbness or stinging pain. Grassy Narrows is demanding justice from the government for contamination of their river and the poisoning of their people.

We stood alongside those with whom we have our disagreements but who share the position that there should be no ‘camps’ because camps are prisons. But we also stood amongst our opposition, those who do not want camps because they can’t stand the people in them.