LESVOS| The Blatte and the Black 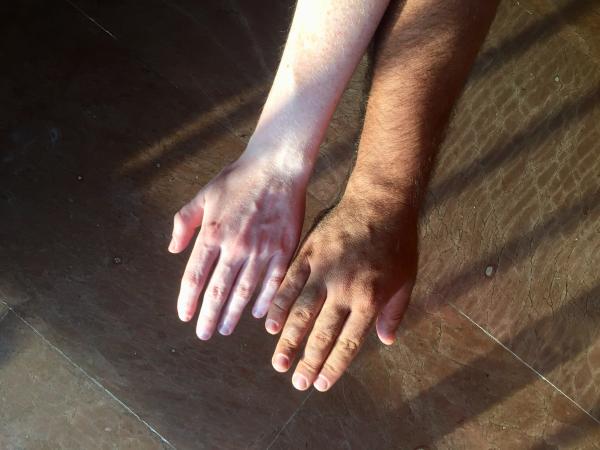 I had a conversation recently with a good friend of mine from Cameroon. He was telling me that I am white. He was comparing the colour of his arm to the colour of my arm. “Look so white your arm is and so black mine is,” he said with a big smile. It was the first time in my life that someone had called me white.

There are people in the Zagros Mountains and Mesopotamia where I come from who are blonde, paler than others or ginger, but I have never been categorised as one of them. My grandfather was blonde but he had black eyes. His genes do not seem to have left so much of his skin tone in us. Some of us have inherited the shape of his nose, his stubbornness and/or other features but the colour of our skin is light brown to dark brown.

I learned that black and white is not about the colour tone of skin when I went to Sweden in 2004. All of a sudden I was not a young man in his early twenties who was full of dreams of adventures and revolutionary ideas. All of a sudden I was a “blackhead” or “blatte”. There are several theories about what the word means. Some say it comes from the Romani word blawto or blato which means “blue man” or “black man,” other people say that it comes from the verb “plattra” which means someone who speaks nonsense and whose language is not understandable; a similar meaning would be the Greek word “barbar” (the root of the English word “barbarian.”)

Along with everyone who has black hair, different tones of brown and black skin from South America, Africa, the Middle East, South Asia and Southern Europe I was called “blatte” in Sweden. Before even asking my name, people would ask me where I came from.

“So for how long have been in Sweden?”

“Are you going to move back to your country?”

“For how long do you plan to stay in Sweden?”

“Is there a war in your country? Is it why you are here?” they would ask me.

When I told them my name they did not really care how my name was pronounced while they were very clear that theirs was “Elizabeth with Z and TH” or “My name is not Biurn but Björn, with Ö-Ö-Ö”.” After that they would not ask about what I thought about the future of humanity, what gives joy in life or what dreams I had, but they gave me compliments about how well I spoke Swedish. They wanted to tell me that Sweden is not my country, that my home was somewhere else and one day I would have to leave and go back to wherever my home was.

My two best friends were from Bujumbura and Sarajevo. We found ourselves in the non-white shelf of society. Despite our differences, we had we all agreed that we were in the same boat, in a sea of systemic racism and we had to stay united in order to stay human. The white shelf never invited us to their parties, never said “hi” to us on the street, never made any effort to make us feel loved and welcomed, so we did that ourselves. We sat by the lake and smoked nargila (water pipe) . We barbequed at grilling places in the forests and laughed at jokes from our home countries.

My Cameroonian friend made me think beyond my experiences in Sweden. I thought about a guy from Sierra Leone who lives in Mytilini. He and his current wife, who is Turkish, fell in love in Turkey. Her family wanted to chase them down and kill them because he was black. He has been stopped so many times by the Greek police because they could not imagine that a beautiful Turkish woman could be together with a beautiful Sierra Leonean man. Turks and Greeks might have a lot of differences in ideas and animosities, but there is structural anti-black racism in both countries, which is killing and hurting people every day.

So I told my Cameroonian friend that while it is true that I am not black, because I do not face the horrible oppression that black people face everywhere, I am not white either. I was in those thoughts walking on Ermou Street in Mytilini when I met a Greek acquaintance who made a racist comment about my appearance, saying, “Oh you have become so black; you look so exotic”.

“I am not exotic at all. I am just a beautifully tanned man,” I retorted. I did not tell her that she should go to Sweden, to be called blatte and feel how much it hurts to be exotified, exploited, patronised and made invisible all the time.