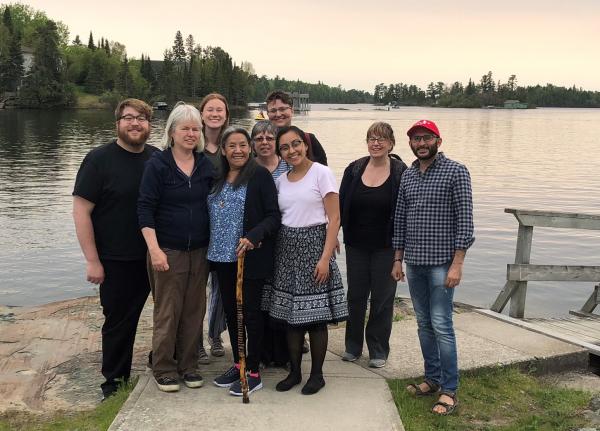 I spent hours trying to learn to say the name of the place where I was staying in Anishinaabemowin, the language of the people who live there. It is Asubpeeschoseewagong, and even now, as I hear it come off my Anglo lips, it sounds completely unlike any language I know. It is so soft and gentle that you could mistake it for the rustling of the wind in the leaves of the birch trees, or the waves rolling in and out over the sandy beach of the lake.

At Anicinabe Park in Kenora, our Christian Peacemaker Teams delegation met with Cathy Binesikwe Lindsay, who took us down to the Lake of the Woods where we prayed for the Water (Nibi). Water, a symbol of our Christian faith, the sustainer of life itself, is under attack and in many First Nations communities is contaminated and unpotable. Cathy’s voice was strong and commanding—mirroring her passion—but the language itself gently wove around us and into my heart, subtle and caressing.

We arrived at Grassy Narrows the day after the Minister of Indigenous Affairs, Seamus O’Regan and his delegation were there to get an agreement signed by the Band Chief for the Mercury Home. It is to be a home where band members suffering from mercury poisoning can go when they can no longer take care of themselves. We spoke with Jason Kejick, one of the band councillors who shared with us how the government representatives conducted themselves, which highlighted the difference in their languages.

Jason Kejick shared that the governmental people used ‘oppressive language’ in their conversations. Judging by the video shared by the media after the meeting, I agree. I saw Seamus O’Regan continually talking over Chief Rudy Turtle, not allowing him to speak, not giving space to an equal.

Residential schools forbade the use of the Anishinaabemowin language and their successors, the day schools, also oppressed this beautiful, moving language, with devastating effects on the lives of the people. Now, the people of Grassy Narrows want technical language taken out of the contract because the Mercury Home is really about the people who will live there and die there. The use of language means something, and reveals so much about our motives.

It was at this time too, I noticed that the Indigenous names for places always reflect the land and its attributes. Kamloops (Tkemlups in Shuswap) means meeting of the waters, in this case the Fraser and the Thompson rivers. Notice that the rivers are both named after people—white men. Toronto (Tkaronto in Mohawk) means, “where the trees are standing in the water.” Regina and Victoria are both named for Queens, and Hamilton is named for George Hamilton. The people of the land lift up the land; we settlers lift up ourselves.

Jason said the “use of European language is harsh and controlling.” I had never thought of English as harsh. I sing in a choir whose repertoire is in multiple languages, and I think most choral singers would agree that English is difficult, along with a few others. Our consonants are harsh and sometimes explosive, and our diphthongs elongated.  Many of the Anishinaabe people may no longer speak Anishinaabemowin fluently, but the concepts that form the foundation remain. English builds on colonial concepts, and when used as a weapon of oppression it assaults the ear, and in the people’s case, their spirits as well.

Anishinaabemowin is a beautiful language, and I pray that it will continue to grow through programs in First Nations community schools, in friendship centres and other Indigenous initiatives. I wish I could understand the soft whisper of Anishinaabemowin, but nevertheless I am able to feel it gently touch my ear. It feels like a cherished grandmother’s touch, like a butterfly’s wing, like the voice of Mother Earth herself.