PALESTINE: Passage through the checkpoint–experiences of Palestinian women in Hebron 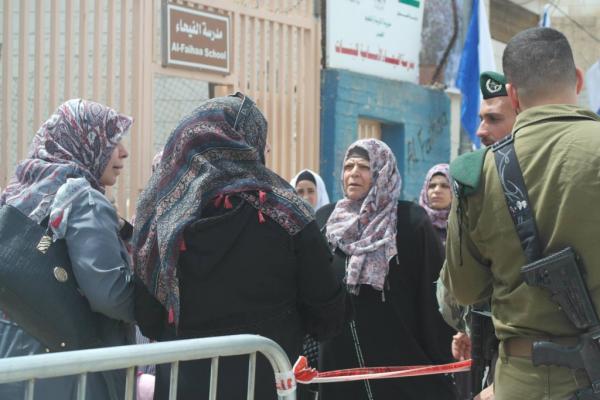 In the Israeli-controlled H2 area of al-Khalil (Hebron), Palestinian women and girls moving around their neighbourhoods encounter a number of obstacles to their freedom and security vis-a-vis Israeli military, border police, and settlers. The checkpoint, however, is an unpredictable and isolated site of male control, where no one can see what happens, or guess how long the passage might be. At one of the 21 permanently-staffed checkpoints in H2, a woman might have her ID checked, bags inspected, or encounter demands that she submit to a body search, often when no female soldiers are present.

During community meetings with CPT, women living or working in H2 Hebron reported that military personnel periodically ask them to remove their hijabs and other articles of clothing when going through the checkpoint turnstile. The soldiers know that the regular pressure for the women to expose themselves is stressful and degrading to women, yet they often disregard if not actively undermine respect for their gender, cultural or religious rights. The pattern of male-conducted ‘security checks’ by Israeli forces in Palestinian neighbourhoods, and accompanying abuse of power, clearly violates international treaties on basic human rights. The UN Human Rights Committee specifies, “Persons being subjected to body search by State officials, or medical personnel acting at the request of the State, should only be examined by persons of the same sex.”*

Women in the community describe Israeli personnel forcing them into the uncomfortable or dangerous position of having to stand up in defense of their rights to refuse inspection, from visual checks to strip search. Other outcomes include longer detention of 20 minutes or more, Israeli forces sending them elsewhere for additional ‘security checks’ and continued harassment – often ultimately without female soldiers ultimately inspecting them.

Palestinian teachers working in H2 explain furthermore that, although the soldiers know who they are – and perhaps because of this – these soldiers regularly stop and search them. Sometimes after the soldiers check their IDs are checked, they must go to the police station for escalated investigation, preventing their arrival to work on time, and interfering with their students’ right to education. While navigating certain barriers, female teachers also note soldiers deliberately shutting heavy metal gates on them so as to hit the women’s bodies, injuring hands and feet. Forced transfer to additional security sites under male military escort, as well as routine closure of roads and checkpoints, which require them to take alternative routes through alleys and residential areas, create additional risks and insecurities for women and girls.

One female teacher living in al-Khalil (Hebron) described a particularly disturbing incident. While a soldier searched her at the checkpoint, she caught him trying to plant a knife in her purse: “I stopped him and told him I could see what he was doing.” She was afraid that he would accuse her of an attempted stabbing as an excuse to detain or even kill her. This fear is based in the reality of multiple cases of extrajudicial killings of women and girls, often connected to allegations of attempted attacks or possession of knives. The shootings of local Hebron girls, 18-year-old Hadil al-Hashlamoun; Dania Jihad Hussein Ershied, aged 17; and 14-year-old Kuleizar al-Eweiwi during 2015-2016 remain in the city’s collective memory.

The harassment and violence that Palestinian women and girls face in navigating the Israeli roadblocks impact the way they move through their communities and access opportunities and healthcare. As CPTers journey with them, they see that some women are speaking up in defense of their rights, refusing body searches and questioning soldiers, while some are going further to support others facing harassment and violence. One female human rights defender described her efforts to open up the conversation among young women in her community, acting as a focal point or informal hotline to share information and talk about their experiences.

Female educators also have a key role in leading girls and their families in preserving a sense of normal life and community amidst the checkpoints. At a local girls school, one principal has created a beautiful, child-friendly environment quite different from other schools in the area. Her intention is to make the school a place “where students can breathe.” The school has hosted workshops providing psychosocial care for children coping with trauma, as well as hosting community workshops around women’s rights, and responding to emergencies to improve family relations and resiliency. Educators are some of the strongest actors in defending the rights of children and their families, advocating as community leaders near the checkpoints, and negotiating the safe passage of students in the streets.

Palestinian communities, struggling to ensure the rights and honour of women and girls, face immense challenges to transform cycles of gender-based violence under the weight of military Occupation. With each headline of Palestinian women assaulted or killed at checkpoints, it is all the more important to recognize the efforts and the resistance of women right where they are. As a starting point, we must look and listen for the stories women and girls tell from behind the barriers, on the margins, in their classrooms, in their homes, where they are the center of family life, and in their communities, where they keep people connected across structures of division and violence

With thanks to the women and girls, teachers and community leaders who shared their stories with CPT.