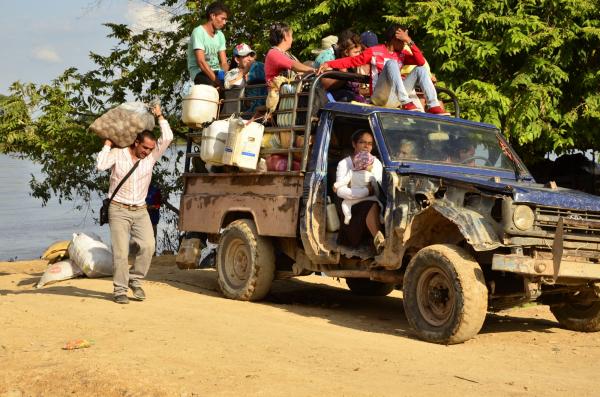 Since 2002 Christian Peacemaker Teams (CPT) has accompanied farmers and miners in the township of Micoahumado, which lies in the southern region of Bolivar Department. With the accompaniment of CPT and other organizations, the community had the courage to initiate a negotiation process with the ELN guerrilla group and with paramilitaries, demanding both groups respect the community’s humanitarian and civilian areas.  The groups agreed to stay away from Micoahumado. The community then formed the Permanent People’s Assembly for Life, Peace and Justice. In the words of its leaders,  “the community has lived in relative peace for the past 15 years, until the army arrived last February.”

Since 2 February 2019, with the arrival of the national army, the community has been caught in hostilities between the ELN and the Colombian army, and has suffered three assassinations. Facing the humanitarian crisis in Micoahumado, the Defensoría del Pueblo (National Ombudsman Office) issued an Early Warning Report alerting those concerned about the community about its extreme vulnerability and how it has been stigmatized by those in power, due to the historical presence of the ELN. “How is it possible that, after the Defensoría del Pueblo issues an Early Warning Report demanding the Colombian State to guarantee our rights and to take corresponding actions to protect the civilian population, they now arrive to arrest us and infringe even more on our rights?” Pablo Santiago asked the officers of the Defensoría del Pueblo and the local Ombudsman. The Early Warning Report refers to the judicial process against social leaders in 2017, when a judge revoked an order for incarceration after ruling that the prosecutor was seeking media attention and failed to present reasonable proof of guilt. The community considers the detention of farmers a case of “judicial false-positives.”

Despite the recommendations of the Defensoría del Pueblo and official public complaints of increased violence issued by the community, in the early morning of 15 July 2019, the police and the national army arrested nine people. According to the testimony of community members, the public forces entered violently, shooting, breaking doors and causing damage to the houses, dragging people out by force and in the presence of children. They did not allow the detainees to put on their clothes and shoes. Then, when the community approached the military base where the authorities were holding the detainees, the army responded with tear gas and additional violence.

To read more about the military invasion and the arrests, click here.

Please sign this letter to the relevant authorities to request their immediate attention to the extremely risky situation for the community of Micoahumado, the implementation of the recommendations of the Early Warning Report, their respect for due process and the judicial guarantees for those who have been arrested.

Sign the petition and help us amplify the voices of Micoahumado and all the people in the South of Bolivar!