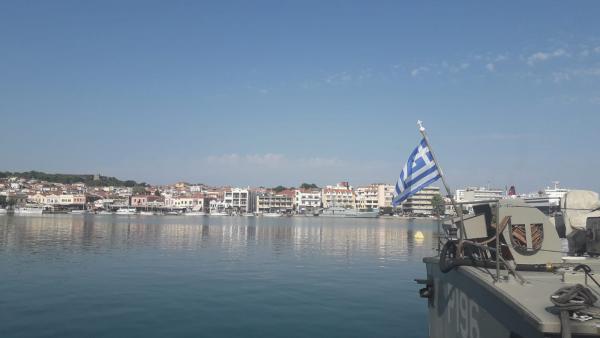 Please hold in the light those migrants trapped on Lesvos who face increasing police harassment and detention, as well as those in the solidarity movement who increasingly are vulnerable to criminalization by state authorities.

On 7 July 2019, the ‘centre-right’ New Democracy party replaced Greece’s Syriza government. The international press welcomed the result, noting that the far-right Golden Dawn party had ‘crashed out’ of parliament after achieving less than 3% of the vote. Media coverage described it as the end of the influence of the populist fringe on both Right and Left, and a return to the ‘progressive liberal centre’.

The reality of New Democracy is far different from its public face. Prime Minister Kyriakos Mitsotakis presents himself as statesmanlike, yet the party hides a hard Right, anti-Semitic, anti-migrant faction. The party’s Vice President has sought to whitewash Greece’s history of fascism under the military junta of 1967-1974, claiming that ‘there were no deaths’ during the Athens Polytechnic Uprising of students against the military dictatorship that claimed at least 24 protesters’ lives.

Within one week of arriving in power, New Democracy had abolished the Ministry of Migration, and transferred responsibility for controlling migration to the Ministry of Citizen Protection, the same state department responsible for policing and prisons. The restructure signals a more punitive approach to migrants in Greece. Since the party’s election, we have heard stories from migrants of an increase in police activity, of routine harassment, and increased detention.

The election result has emboldened the far right on the island of Lesvos. The Free Citizens bloc of Mytilene’s municipal government announced that they would seek to end the ‘sovereignty of the NGOs’, accusing them of ‘humanitarian profiteering’, and declaring that CPT’s partner organization, Pikpa solidarity camp, should be shut down by the local authorities. At least two members of Free Citizens in local government are currently facing charges for participating in a racist pogrom against migrants who were part of a nonviolent protest in April 2018.