COLOMBIA: Having coffee with Laura from the Popular Organization of Women 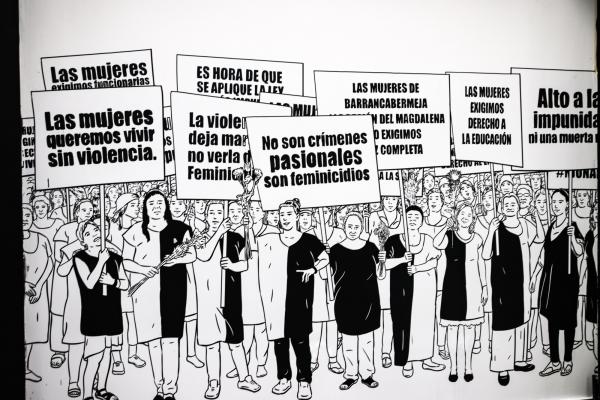 The House of Memory and of the Human Rights of Women. Photo: Juliane Assmann/ECAP

We did not bury them

This is the phrase one sees when walking through the Casa de la Memoria y de los Derechos Humanos de las Mujeres (The House of Memory and of the Human Rights of Women). The colors black, purple and white dominate the space. A tree with all the names of assassinated women leaders and a black gown with the words of the anthem of the Organización Femenina Popular (OFP) evoke immediate associations and emotions. Cartoons illustrate the history of the women’s struggle for survival, respect and peace in Colombia.

“Barrancabermeja has been the cradle of social movements. Being a region with such wide social unrest as well as political, social, and armed conflicts has generated a response from civil society mobilizations. It is important to highlight the role that women have played in these processes of organization and social mobilization because the images of women in contexts of conflict and war say that women are widows, mothers, partners. And yes, they are all that in the unfortunate dimensions of the conflict. But here they have been political agents who have assumed the leading role of defending life and human rights,” says Laura Serrano Vecino who has been working for the OFP since 2014.

Laura agreed to sit down with me to share her perspective on women’s rights, feminism and her personal story with the OFP. We met during my first month with CPT Colombia when she asked our team to be part of the judging panel for a women’s photo competition in the close-by town of Yondó. For Laura, who is from a Santanderiana family (Santander being the department where Barrancabermeja lies) and has spent quite some time in Barranca, an internship with the OFP in this city was a welcome option. Even though she had not planned on staying in Barranca the connections she made during her time with the OFP kept her in the city.

“So I arrived in Barranca for other reasons and I was lucky to get closer to the OFP and the process and connect directly. I started doing technical support work on projects but inevitably […] it makes one connect to the organizational process in all its dimensions. It is there where I really have learned to work from feminism as a perspective that is the application of knowledge, and really working with the people — very much beyond the spheres of analysis or the discourse.”

I asked Laura how she understands feminism: “I take feminism from two aspects. Because of my experience I have had the opportunity of awakening my consciousness as a woman, my gender awareness. That implies understanding that there are particular situations that affect me, and I say it as a woman who has privileges, who grew up in a city, who is not a racialized woman, who had the opportunity to go to university. But that leads me to analyze that there are distinctive situations between women themselves. The situation of a grassroots, racialized woman is not the same as for a woman with alternative political ideas. All these elements make us have particular situations that obey the same hierarchical framework. So how can I work in this context and not identify as a feminist? It would be a contradiction.

So, on the one hand my feminism stems from my experience, and on the other hand I believe that in feminism lies the capacity of imagining new realities, of proposing and acting in favor of these new realities. This implies understanding the intersectionality of inequalities and covering them all. I would not help much if I said that I am a feminist but at the same time I am racist. Because then I am not understanding the situation of racialized women. Or if I was a feminist and a classist, I am not understanding the situation of poor women. Or if I was a xenophobic feminist, because then I don’t understand the situation of migrant women. Feminism gives me a slightly more integrated look at all these inequalities and has led me to want to transform them.”

Does the work of the OFP have anything to do with the (feminist) discourses Laura knew from studying sociology at the university?

“It has different implications to work with rural women, to understand their context, understand their ways of thinking that obey the tradition; so as not to attack them in a messianic way. […] In that sense, one of the things I value most about the OFP is its commitment to grassroots feminism from the understanding of the realities of grassroots women, their context, their practices, how we can achieve that this feeling, that they already have, begins to transform the images and the realities of oppression that they experience.”

It is my observation (coming from a German context) that the intersectionality of different forms of oppressions and the structural character of violence seem to be more obvious to people in Colombia than in countries of the global North. Even today, people in the global North discuss sexism only, or racism only or ableism only and limit the definition of violence to physical violence. I have noticed this difference before when talking about oppressions with a pan-Colombian delegation group or when talking to a shopkeeper in Micoahumado who flat out told us “poverty is violence”.  It became apparent again while listening to Laura as we sat in an office of the OFP house in the Barrio Primero de Mayo, which is one of the districts in Barranca full of history regarding the conflict in Colombia, mobilization and social movements. 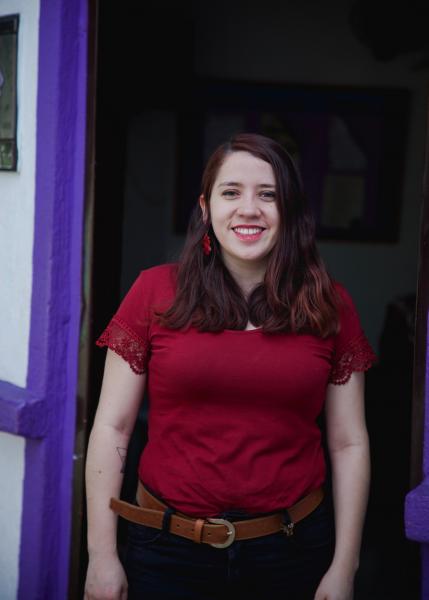 Founded in 1972, the OFP is one of the oldest human rights organizations in Colombia. It started as a women’s group of the Catholic Church just down the street where CPT-Colombia has its office in Barranca. For decades they have launched countless projects, mobilized civil society and organized protests and strikes. Today, the OFP has offices in the entire Magdalena Medio region as well as in Bogotá and Neiva.

“The OFP is completing one of its stages, the recovery stage, in which some measures were developed that have to do with collective reparation and the reconstruction of the social and political project of the organization. One thing that I greatly appreciate about the OFP is its ability to respond to the political moment by maintaining the principles, maintaining its ideas and maintaining its convictions but it is also able to respond to the political moment of the country and the region,” Laura continued. “At the beginning of the year we sat down to see where the OFP is going at the moment and we realized that there are some strategic issues on which we are focused. The whole issue of intergenerational dialogue, the formation of new leaders in the region, the positioning of grassroots feminism as a banner of women’s work, the theme of the grassroots feminist economy, which is one of the strategies that the OFP is strengthening.

So what role can we as international organizations play in this complex situation? How can we stand in solidarity with the distinct struggles of women in Colombia?

“The international community becomes a guarantor of the actions that can be taken to demand the implementation of the peace agreements. More specifically here in the territory, the companions tell us that when they made these commissions to go look for the bodies [of assassinated or disappeared persons], or to go rescuing young people who were going to be kidnapped by paramilitaries, the accompaniment was always a guarantee of protection for them. When you work with an autonomous, civilian organization that does not handle weapons, and is peaceful, that promotes peaceful ways, in a context of polarization and stigmatization, it is important to have a guarantee of that civilian character. In that sense, the accompaniment of organizations such as CPT is fundamental because it is what allows the organization to reaffirm its position, to shield itself a little in the face of these attacks and accusations.”

In Laura’s words, in her way of thinking and in her life story one can hear the echoes of marches and struggles of the past. All of a sudden it becomes true that none of the assassinated women have been lost to the nothingness of death. None of them are forgotten. But indeed they have become seeds of hope and resistance, being planted into the collective mind and memory of the women in Colombia, of the next generation rising up. These seedlings are breaking out into the open now, sprouting in projects like the House of Memory, lifting up many more women and encouraging them to shape the history of Colombia with their hands, voices and minds.

To learn more about the OFP (in Spanish) go visit their blog and YouTube playlist.