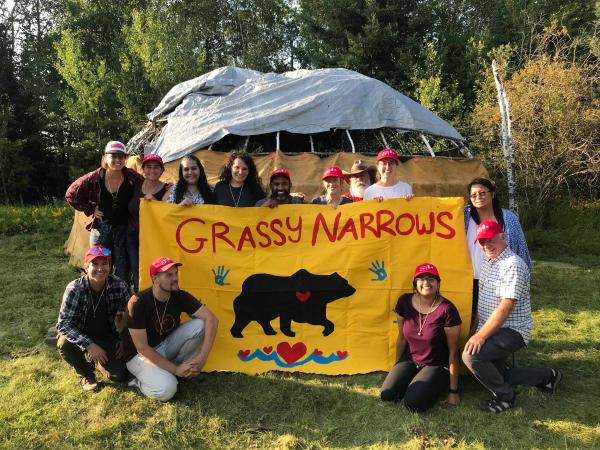 The powwow drum played in the distance while two members of our delegation to Grassy Narrows First Nation led our group in Kabbalat Shabbat, a Jewish prayer service. As the first interfaith Indigenous Solidarity delegation of Christian Peacemaker Teams, we welcomed the Jewish day of rest to mark the beginning of our journey together. While the sun set over the English-Wabigoon River, we battled a growing swarm of mosquitoes and sang prayers while watching the powwow.

As Christians and Jews, we are participating in this delegation to wrestle with what it means to uphold treaty obligations and to understand our role in solidarity work as non-Indigenous guests on Turtle Island. The first week of our trip we reflected many times on the role of our respective religious traditions in facilitating colonization and white supremacy, and at the same time, how faith-based community motivates many of us to engage in activism. For Andrea, a non-Canadian delegation participant, Jesus’ message of justice compels her to engage in solidarity work. She believes that the twofold nature of justice, including both healing for the oppressed and capacity for transformation of the oppressor, is central to Christ’s message. For other delegates who are both Christian and Canadian, grappling with the church’s role in the residential school system and its inter-generational impacts on Indigenous people are central to reflecting on maintaining a Christian faith while engaging in decolonization work.

In contrast to Christian participants, some of whom are grappling with the church’s complicity in colonization, Jewish delegates are reflecting on Canada’s role in providing a safe haven for Jews, especially after World War Two. My own grandparents are Holocaust survivors, and I think about the interconnected nature of holding both a refugee and a settler identity as a Canadian citizen. While Canada provided safety for my ancestors, I also benefit from resources taken from Indigenous Peoples that should my government should distribute equitably and according to treaties made with First Nations. As a Canadian, I bring to this work a commitment to holding my government accountable to the treaties.

I joined this delegation to do my part in undoing legacies of colonialism by learning from Grassy Narrows community members and by engaging in grassroots solidarity work. On this delegation, that work has included tying tarps to the frame of a wigwam that Indigenous women at Grassy Narrows will use at an upcoming gathering. As I fixed twine to the wigwam frame, tiny fragments of dead leaves from the roof collected in the miniature copper pot necklace around my neck—a small symbol of water protection. The necklace was a gift for our group from elder Judy Da Silva, who has been a leader in Grassy Narrows’ fight against logging expansion, during which time many CPT delegations were present in providing on-the-ground support.