MICOAHUMADO — a micro portrait of Colombia 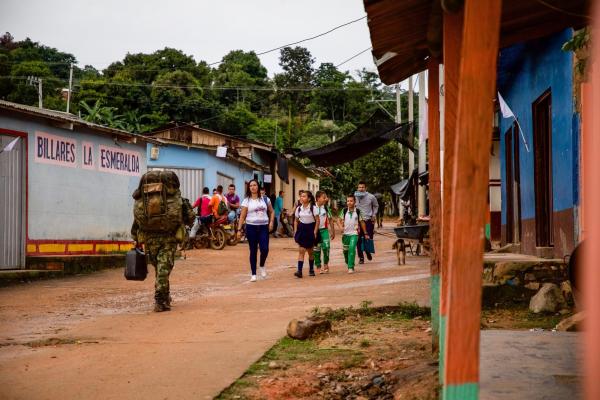 Even children are not safe from becoming involved: soldiers are offering candy in return for information,
thereby violating rights of children. Photo: Juliane Assmann/CPT

It’s a cloudy day at the end of May. My spine crashes against the wooden rods that frame the back of a pick-up truck that takes us up the bumpy road into the mountains of Micoahumado. I have yet to learn that the more relaxed you are, the fewer bruises you get. On my left, one of the campesines* who is chatting away with my teammate, is getting uncomfortably close. I scoot a bit to the right but can’t go too far because a young man is sitting there. After 10 minutes or so I decide to say something and ask the man to move a bit to the left, which he does, although not without complaining.

We are not taking a 10-hour journey, however, to talk only about sexist dynamics and male entitlement. We are on our way to accompany a community that more than 15 years ago had declared themselves a peace village, starting their own process of negotiation with the paramilitary forces and the ELN. Up until the beginning of this year, Micoahumado had agreements with all armed groups that no one was allowed to enter the town armed, setting an example for multiple surrounding towns and cities. However this year they have come under fire again, literally. Three men have been killed. Wilmar Carvajalino  was on his way back to Micoahumado from the nearby town of Morales transporting goods for the cooperative store. He was shot 15 times in the face on the 10th of March, just two days after one of the precandidates for the municipal council; Belisario Arciniégas García was taken away from his wife and shot as well. The third victim was a teenager who was playing soccer. The military declared that guerrilla fighters from the ELN were near the soccer field and engaged them in combat. The young man was supposedly killed in the crossfire. The community reports that earlier ELN fighters had passed close by but at the time of the shots that killed the young man, no guerrilla fighters were present.

We are on our way to accompany the community until a commission of Colombian social and human rights organizations arrives in two days to listen to the community’s concerns and requests. Before the commission arrives we eat and talk with Pablo Santiago’s family, one of Micoahumado’s leaders, take a walk to his farm— at that moment it is safe to do so — and get to know the small Venezuelan family that is staying there for the time being. Even though the ELN removed the landmines in the 2000’s as an effect of the community’s peace negotiations, it is still important to stick to the paths. Arizolina Rodriguez, one of the social leaders, tells us that five to six cows have already stepped on landmines in the last years and one farmer has lost one eye and a leg.

We also visit another one of the social leaders, and long time friend of the team, Juan Bautista Colorado, who talks to us about the threat involved with being caught in between the fronts.  Both the ELN and the Colombian military are a lethal threat for the civilian population fighting their battles in the middle of the town, as happened on 2 February this year.  This threat makes it impossible for the farmers to reach their farms and cultivate their land where their food is coming from. Since February, the economy has dropped by 80%. Even with a functioning economy, many families are only just getting by. But what really chips away at the hope and courage of the people are the small daily oppressions.  Oppressions such as patrols of the army through the town taking photos of houses and people, intruding into schools and even asking teachers for girls to do cleaning chores for them, the ubiquitous presence of weapons, the sporadic visits of ELN members: looking for women, demanding water, or using random private bathroom facilities‑as well as the death list that the ELN supposedly has with around 20 names on it.

Even children are not safe from becoming involved: soldiers are offering candy in return for information, thereby violating basic human rights of children.   It also violates a basic humanitarian law of the Geneva Conventions: to keep children out of the conflict, instead of turning them into informants. Whenever battles in and close to the town are happening during the day, school attendance is usually impossible for security reasons. When we talk with Arizolina she stresses how much the children suffer, how intimidated they are just by the daily patrols. She herself has three children and three grandchildren.

It’s the middle of July and news emerges that the military has taken away nine members of the Micoahumado community accusing them of several crimes, amongst others the crime of rebellion, which is a way of accusing community members of working with the ELN. When I read that hundreds of farmers marched down the road towards Morales to block it as a nonviolent protest against this arbitrariness I thought back to my own ride up to Micoahumado on this road. I remembered how impressed I was by the scenery, how green the hills were, what a view opened up over the plains of the Magdalena river and how Arizolina and my intrusive seatmate had shown me a cave in the rocky cliffs on the way.

I remember the dining room of Pablo and his wife Mema, plastered with photos of their five children — graduation photos, Quince Años photos (the 15th birthday of girls is widely celebrated among Spanish speaking people throughout the Americas), portraits, and baby pictures. I remember my teammate practicing multiplication tables with Susana**, who is in fourth grade and is spending her childhood in a war zone. My hope is that Susana will find the resilience to finish school in spite of growing up in a war zone. That she will get to experience an unforgettable Quince Años in a few years. And that she will not yield to the frustrations, trauma and pressure and, for example, leave the community and displace herself.

Our hope and goal as CPT is that Micoahumado can repeat its immense effort and implement a peace process with all actors involved. Because if this process fails, other communities who have followed Micoahumado’s example of peace negotiations and agreements, might fall back into violence as well.

CPT will continue accompanying Micoahumado. If you want to support civil peace initiatives like theirs please consider donating to CPT so we can continue this work in a regular and reliable way.

*People who work on the land

**Name has been changed