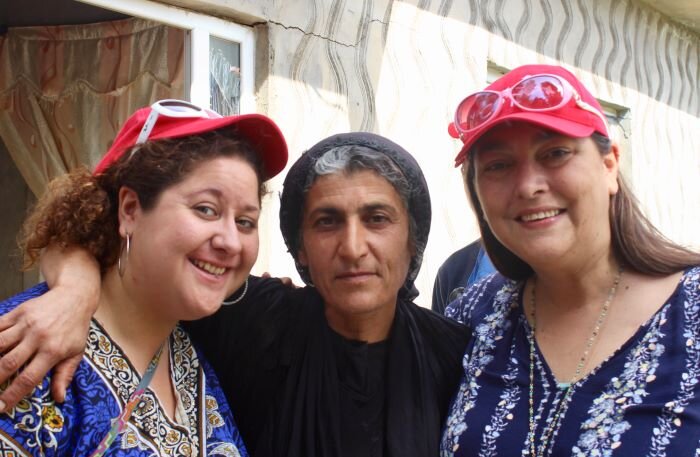 What was it like? After 4 years working on the Iraqi Kurdistan team, it seems that all curiosity has been focused on the final week of my time on the team. The weekend that the CPT team was in a small Assyrian Christian village as the Turkish government targeted the area with missiles from F16 fighter planes and drones in it’s war against the Kurdistan Workers Party (PKK).

“It was confusion. It was fear. It was anger. It still is.”

“What was it like?” How to respond? It was confusion. It was fear. It was anger. It still is.

On October 4, our CPT Iraqi Kurdistan team was in the Nahla Valley, an area with several villages that CPT has partnered with over the past three years. Our team had just begun an accompaniment of the neighboring village Chame Rabatke. The previous day, mountains adjacent to Chame Rabatke had been targeted by the Turkish aerial bombardments that started massive fires. The bombings prompted our team to relocate to Kalilan, a village in the heart of the Assyrian Christian area of the Nahla Valley, which is a more populated area. CPT has hosted several delegations in Khalilan over  the past three years. We were intending to reassess the situation from this village further from the bombings near Chame Rebatke.

We had become used to the sounds of drones. It cycles between the sound of a small twin propeller plane and a large fat bumble bee right above your head. Then the sound fades to where you think that it’s only in your mind… possibly you are still imagining the sound. Then it comes back to confirm that overhead is a deadly war machine watching you.

As we sat in the guesthouse where we always stay in Khalilan, it seemed to be another normal day. A maintenance worker had just left and assured us he would be right back with some supplies. The day was winding down as we sat working on our laptops. Suddenly there was a loud boom. “Was that a bomb?” 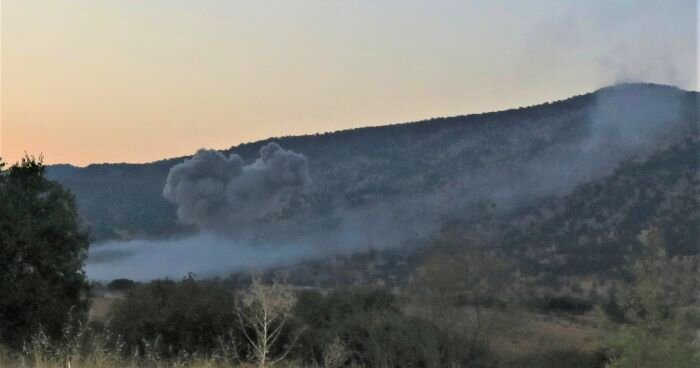 Image of the bombing captured by CPT from Khalilan.

We jumped to our feet and went outside. “There!” my teammate pointed. Just over the roofline of the neighboring house, we could see a plume of smoke. Villagers were coming from their houses and everyone was looking and pointing. What should we do? We began to take photos. Hands shaking, click, click click. Dozens, hundreds…  Just as quickly as it happened, the plume turned into a light mist and began to disappear… Was it over? Confusion… Was this place, the homes that had welcomed so many delegations and countless long conversations, friends and families, even pets that we knew by name… was this town being bombed? Just then there was the roar of a jet and the indescribable sound of a missile piercing the air. We ran back to the entryway of the house.

Your body automatically flinches and ducks. Boom! Another explosion. A Thick plume was rising in the exact same place and a fog of white descended along the mountain towards the valley. Again, click, click, click of the camera. There was nothing else we could do.

My phone rang. The display showed that Yousef, our local partner, was calling. This was the first time in three years he had ever rang my personal phone. “Julie?”… “Yousef?”… “Julie?”… It was in this moment that we realized that we don’t speak the same language but I understood. He was worried about us.  I gave the phone to my teammate who spoke to him in Kurdish and ensured him that we were safe. Village neighbors were gathering in small groups and people were on their roofs. We rushed inside to make calls and quickly posted online.

“Then another plane, a roaring missile BOOM! Flinch! Duck! The wife offered us fresh hot bread.”

About thirty minutes later, after things seemed to settle, we went to talk to the neighbor family still outside. As we approached the father of the family welcomed us warmly and invited us for dinner. Still shaken, we politely declined and asked if they had information about the area that was being hit.  He said he was thankful CPT was in the village to document the bombing and asked us to tell the world. He explained that his wife was making bread and began to ask us again to stay for dinner. Mid-sentence a sound came from over the mountains. It was another Turkish fighter jet. Within seconds it roared overhead and again there was a loud explosion. Boom! Involuntary flinch. We all ducked. It was getting dark outside but we could see the same area had been hit. The father continued speaking… inviting us for dinner. Then another plane, a roaring missile BOOM! Flinch! Duck! The wife offered us fresh hot bread. The husband went to the roof to answer a call, talking hurriedly in Assyrian. He periodically pausing to re-invite our team for dinner. Again we politely declined. I was inspired by the family who seemingly kept a normal pace, the way they calmed their children, how the mother continued to prepare the family’s meal. My head was swirling.

Soon after we found ourselves outside of the local activities center a short distance up the road just outside Khalilan. In the distance we could see a fire raging from the bombardments. Several villagers were sitting around tables talking and playing cards.

We met a man who lived in the area directly hit. He said that after the first bomb, his family came down to the village. He was worried about his home and his animals that were left on the mountain. All he could do was watch as a raging inferno burned near his farmland.

Again we took pictures, but nothing that our cameras captured could accurately convey the situation. It was a strange juxtaposition of the burning mountainside, the electricity in the air, and the men playing cards in the yard.

“I know there is a high probability that the Turkish bombs and planes were made in my own country, the USA.”

Later that night, there was one more explosion. It was too dark to see where it had hit but we assumed it was the same place. Villagers later told us it was a drone strike.

We called consulates, wrote posts for social media. We were exhausted. My teammate made dinner. Then, like the rest of the people of the Nahla Valley, we went to bed.

I don’t have any profound conclusion, only questions. I am still curious how many of the villagers carried out their regular nightly activities while the bombings were so close. I am also curious how by the end of the evening my teammate cooked dinner for us and we could just fall asleep.

I know there is a high probability that the Turkish bombs and planes were made in my own country, the USA. This makes me furious!

So this is “What it was like.” Confusing. A feeling of helplessness. A final resolve that there was nothing else to be done except to go to sleep.

But after we awoke, the responsibility for helping end this madness would be increased tenfold. Anger at the Turkish Government, NATO, the USA and the world who lets this continue to happen. As I leave the Iraqi Kurdistan team to take another role with CPT, I feel sadness that on my last weekend in a place that I love, pictures of fires will forever be in my mind. But also love for the people who cared for me and gave us hot bread even as bombs fell around us.

On October the 4th the CPT team was staying in the Assyrian village of Khalilan when they witnessed Turkish military bombing near by in the village of Hezanke. Hezanke, Khalilan and all the villages of the Nahla valley in Iraqi Kurdistan are occupied by civilians.