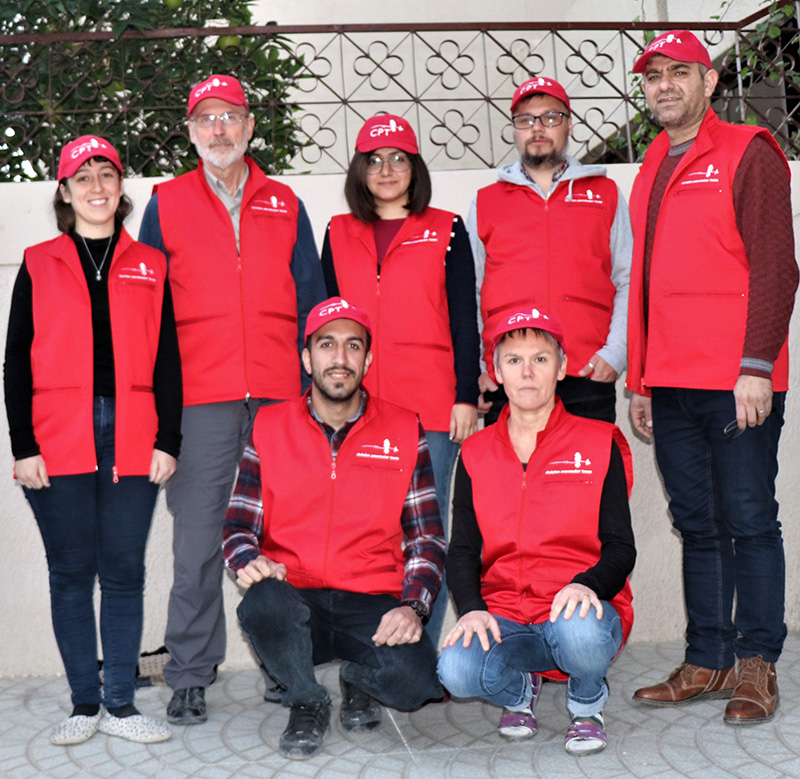 Week to week, we will introduce you to a CPT Reservist who will share their story through the symbols of each Advent candle in honor of the season and invite you to take action to support transforming oppression.

In preparation for the first Sunday of Advent, we begin with the theme of Hope.

Tell us a bit about yourself:

I am a spouse, father, grandfather with all of our family living in Seattle, Washington, in the northwest United States. I grew up on a farm in north central USA but for the past half century have lived in various U. S. cities and traveled in many countries around the world. I studied economics and political science at the University of Iowa and spent several years as a political organizer. My seminary degree in peace studies led to four decades of peace and pastoral ministry in the Mennonite Church, until retiring from pastoral ministry in late 2013. I am now serving half-time on the CPT Iraqi Kurdistan team. In these later years of life, I am deeply committed to the abolition of war by envisioning and promoting a paradigm shift from Just War to Just Peace.

What motivated you to join CPT?

My deepest motivation is following Jesus’ life and teaching to love God, self, neighbor, and enemy committed to nonviolent peacebuilding. As a peace activist, I have been motivated by CPT’s vision for “Getting in The Way of War” when it was founded in the 1980s, that has evolved into a vision for “Building Partnerships to Transform Violence and Oppression.” The two Mennonite congregations in the United States, that I have served as pastor, Cincinnati Mennonite Fellowship (1984-95) and Seattle Mennonite Church (1995-2013) have sent numerous members on CPT delegations to every CPT team. In March 2003, I was on the CPT delegation in Baghdad during the early days of the U. S. led war in Iraq and returned to Iraq in 2010 and to the CPT Iraqi Kurdistan team in 2014. Retirement from pastoral ministry opened the way for me to do CPT training in 2016 and join CPT in 2017, first as a reservist, now as a team member. A half-century of political organizing and pastoral ministry has prepared me for and culminated in my role with CPT.

Which CPT teams have you served on?

I became a half-time CPT Iraqi Kurdistan team member in 2019, serving on the team from March-June and October-December this year.

How do you experience HOPE through your work with CPT?

I experience hope in CPT in many ways, and share the following three specific ways that are especially inspiring and formative for me:

I believe that in CPT, as in all Just Peacebuilding, it is essential to have hope in the face of all the violence, oppression, and domination people with power inflict on other people. Hope sustains me for the long haul of genuine Just Peacebuilding.

Share a reflection for advent, which has helped guide your transforming oppression work:

God’s Incarnation in Jesus is God’s embodied presence and passion in and for the whole world showing us The Way to Live and Love as Jesus Lives and Loves now and forever. Amen!

To be human and to have faith calls me to live The Way of God’s Creative Energy and Jesus’ Life and Love.

The Way of Nonviolent Just Peacebuilding is an endless evolving journey of spiritual formation and transformation. Thanks be to God!

Civilians of Iraqi Kurdistan are caught within cross-border conflicts as the governments of Turkey and Iran engage in bombing campaigns against armed groups. Villagers have sustained considerable casualties, damages to property, lasting traumatic effects, as well as multiple deaths. The CPT IK team, alongside partner families whose members died in the Turkish and Iranian cross-border military operations, have launched the “Hear Us Now” campaign. The campaign calls for an end to the bombings, compensation for the losses families have sustained and acknowledgment of the injustice and targeted violence that they suffer. Please share the #HearUsNowStopTheBombing hashtag on your social media and keep these families in your prayers this Advent season.