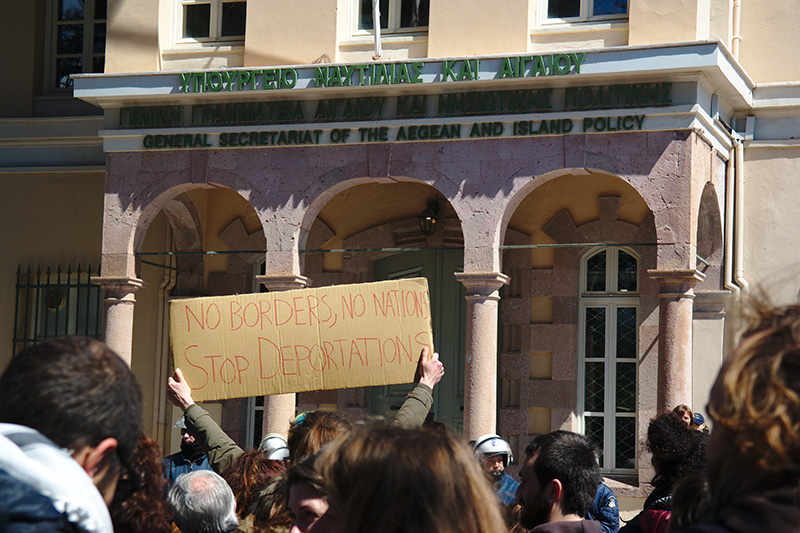 Over the years, the island of Lesvos has been transformed into a procedural greyzone for the thousands of migrants who cross the Northern Aegean sea from Turkey to Europe.

The establishment of the hotspot islands in 2015 (Lesvos, Chios, Samos, Leros and Kos), in conjunction with the 2016 EU-Turkey deal focused on ‘returning’ failed asylum seekers to a ‘safe third country’, turned the islands into vast open-air prisons. Migrants were ‘geographically restricted’ in a region that also hosts an array of European institutions in order to speed up asylum claims. This stream lining gave tacit approval to the abuse of due process by European asylum agencies.

The summer of 2017 saw a series of protests, hunger strikes, and occupations demanding the government end the administrative abuse embedded in the asylum process, and address the miserable and over-crowded conditions in the island’s main refugee camp, Moria. They also called for an end to the implementation of ‘geographic restriction,’ a protocol that leaves people in limbo awaiting asylum decisions, transfers, detention and deportation. In most cases, peaceful protest has been met with backlash. Police and prosecutors were repeatedly seen conducting arbitrary arrests and using collective punishment techniques, including bribing and threatening informants to testify against each other in the community, in order to lower evidentiary standards to secure a prosecution.

The priorities of the criminal justice system are clear. Lesvos has become a lab in detention and punishment, a testing ground for the state, police and prosecutors to see what they can get away with, and against whom. Migrants often wait years in pre-trial detention, while the far-right vigilantes who attacked Afgan protesters on April 22, 2018 remain free. This two-tier justice system is one example of institutional racism.

In October 2019, CPT Aegean Migrant Solidarity hosted five of thirteen defendants who were on trial for participating in peaceful protests in November 2017. The defense was undertaken by the Hebrew Immigrant Aid Society, CPT Aegean Migrant Solidarity’s partner, which argued that the protesters had occupied public spaces because of a condition of necessity following violent incidents in the overcrowded Moria camp. In his closing statement, the state prosecutor asked “what were these people expecting to find, a paradise?” The case was one of a number of trials against peaceful protesters who were eventually declared innocent by the courts.

These prosecutions have quelled the motivation of migrants to resist their inhumane containment on the Aegean islands.

Conditions have further deteriorated. Over 15,000 people now live in the Moria camp and the surrounding Olive Grove overspill area, a space designed to host a maximum of 3,000 people. In July 2019,  when the centre-right New Democracy government was elected — on an anti-migrant and law-and-order platform— rather than decongest the island and provide migrants with dignified accommodation, the newly elected government abolished the Ministry of Migration and handed jurisdiction for migrant issues to the Ministry for Citizen Protection, the state institution responsible for policing and prisons.

The Greek state now unashamedly treats migration as a public order issue. Populations are warehoused out of sight and mind, in camps miles away from basic services, and when they try to make themselves seen and heard, the police deals them with.

In September 2019, when fatal fires spread through the Moria camp, the police chief accused migrants on local media, for starting the fire and attacking fire services personnel. In response to these reports, locals testified that they were afraid to leave their homes. As it later turned out, the fire was not started by migrants but was the result of faulty electronics, and police had shot tear-gas at migrants who were attempting to extinguish the flames.

The government’s response makes their priorities clear: to clamp down on migrants, and leaving the responsibility to rehouse the now-displaced migrants to international NGO’s and humanitarian volunteers.

In the days after the fires, migrants and their advocates participated in tandem protests. Those in the solidarity movement, predominantly Europeans, marched freely through the streets of Mytilene, while migrant-organised protest were not tolerated. CPT Aegean Migrant Solidarity witnessed militarized riot police and armored vehicles blockading Moria camp’s exits, preventing a migrant demonstration from disturbing business as usual in the city.

The arrival of the New Democracy government has brought repressive policies that will make CPT’s work more challenging. Yet the severity of the situation has produced a renewed determination from migrants to organize and fight together, across communities, for a better life.

Help us get to know you better. Fill out this quick two minute survey.
Categories
Aegean Migrant Solidarity
Europe
Migration