U.S./MEXICO BORDERLANDS: Specifics and the Systems on the Border 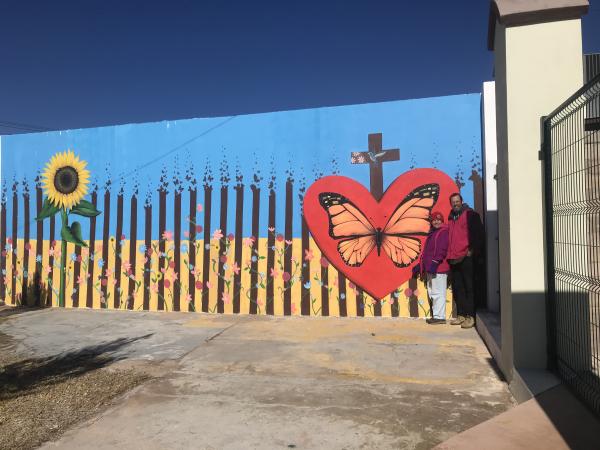 It’s easy to get lost in the daily needs, or discouraged by the magnitude of the crushing oppression on the U.S.-Mexico border.  CPT’s mission to back partners as a part of transforming violence and oppression requires us to attend to the details of the immediate situation, and to the sources of the oppression that grows into violence.  Between the specifics and the systems, our presence and action strategically strengthen the forces for good.

The systems that created the cauldron that is the U.S.-Mexico border include racism, cruel U.S. immigration policy, militarization of the border, decades of U.S. wars and other interventions throughout Latin America, punitive reactions to drug addiction and counterproductive responses to drug trafficking.  All of this has contributed to creating space where organized crime flourishes and where migrants are caught between their violence and the wall, literally.

Hundreds of asylum seekers are waiting, waiting in Agua Prieta, Mexico.  They wait for their turn to present themselves at the port of entry to the United States.  Many of them fled violence in their home communities by groups not unlike groups that are presently powers here in this small border town.

After long and dangerous travels, when migrants arrive at the bus station here, they frequently face extortion.  Some are kidnapped.  Some disappear forever.  If they make it from the bus station to the community of Mexican citizens who organize safer spaces and other assistance, then they join the long line of those who wait.  There is room for some in the shelter.  Most spend scarce resources renting space, vulnerable to organized crime while they wait.

Asylum seekers who are next in line live immediately beside the border entry in a plastic tent with the lower portion of the 14 foot-tall border fence as one of its walls.  They might be called after a day in the tent or after two weeks or more.  The call might come first thing in the morning, at midday or late at night.  Volunteers from the community and CPTers accompany the families to and from the tent and a migrant assistance center where they can clean up and get a break from the weather.   Much of the year the tent is unbearably hot.  This week it snowed.

When representatives of the U.S. immigration system call them, they face many questions and much paperwork.  Some are released to stay with loved ones somewhere in the U.S., pending their hearings.  Others are sent to Juarez, Mexico, an even more dangerous border city, to wait for their hearing.  Unless there are large shifts towards justice in the U.S. immigration system, regardless of the attacks they have experienced or the dangers they will face if they return, most will not receive asylum.

Where are the leverage points for transformation?  CPT presence brings direct support to migrants and to the courageous and hospitable people from both sides of this border who stand with them.  It will take widespread organizing to transform U.S. government policies that attack and deny migrants and strengthen organized crime.