IRAQI KURDISTAN: “If you are faithful to your people”-Christians in Nahla Valley fear Turkish bombing will end their presence there 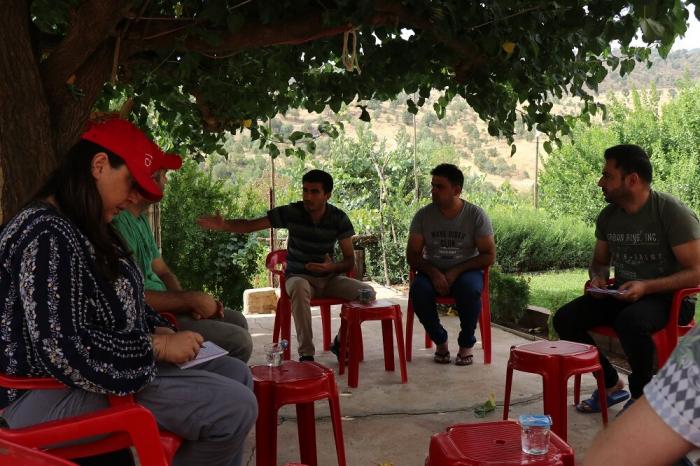 Kak Sandi and other villagers from Chame Rabatke talking to CPT.

After driving for seven hours, we arrived in the Nahla valley at Chame Rabatke Village in the Duhok Governorate. Residents of this village are Assyrian Christians, and Ashur, a teacher hosted us.

CPT Iraqi Kurdistan has visited the village of Chame Rabatke and surrounding villages before. For about six years these villages have lived under the bombardments of the Turkish government, which cause constant fear among the inhabitants.

One of the members of Kak Ashur’s family told us, “In the past, the Turkish governments bombarded the mountains outside of the village. But now they are bombing near the village, causing great fear and traumatizing the people who live here. During the bombardments children cry and even the animals are scared.”

These continuing attacks have forced the people of the village to leave their houses, fields, orchards, and livestock to flee to the cities. For generations their ancestors have lived in this place. Now their evacuation is threatening the continuation of a religious minority that has made this region its home.

“We are not ready to let our children live here and suffer anymore.”

Another member of the family, Kak Ninos, shared his grief over evacuating the village.  He told CPT that living in this situation is simply not safe anymore.  “We are not ready to let our children live here and suffer anymore. This is our red line. Try to put yourselves in our place. What would you do as a father?”

The condition of the road to and from the village is another safety concern and reason to flee. With deep potholes and jutting rocks, it is a dangerous and slow evacuation route when fleeing bombing. Even on more normal days it is a difficult journey for the children attempting to get to school.

There is only one school in Chame Rabatke village. But it was closed in 2014, during the ISIS war, and has remained closed. That same year, it became a shelter for people who were displaced by that war.

Kak Ashur, who was a teacher in their elementary school, now must teach in another village and the rough roads make it too difficult for him to return home each day. “I am a teacher,” said Kak Ashur, “but I cannot go to my work. I have to teach somewhere else and cannot live in my village anymore”. 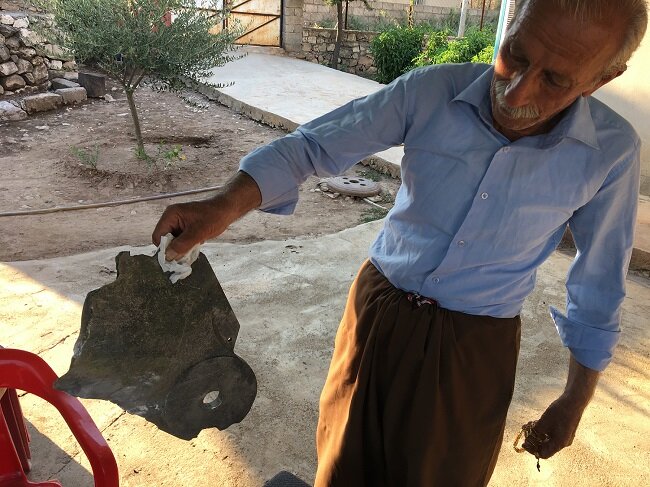 Kak Zaiya, the Mukhtar of the village, showing us a piece of shrapnel from the recent bombardment in Chame Rabatke.

“What surprises me is that Turkey is a member of NATO, and they kill innocent people with U.S weapons. But the international community is silent.”

Kak Sandi, another member of Kak Ashur’s family, told us, “Bombardments caused the displacement of people from the villages to the cities. What surprises me is that Turkey is a member of NATO, and they kill innocent people with U.S weapons. But the international community is silent.”

The villagers do not address only the governments, but also worldwide Christian communities. They welcome any organizations that will come to serve the people of Nahla Valley, which includes the Muslim village of Dupre. They say that as a Christian community, their possibility of dissolution is much higher than the other communities in this region.

“If you are faithful to your own people, help us.”

Sargon speaks about the role of the global Christian community toward the villagers here. He said, “Some international churches gave 10,000 dollars to us, but this sum was not enough to pave the roads completely. We managed to fix part of the road, but after six months it was in disrepair again.” He added, “If you [Christians] are faithful to your own people, it is time to come and help us. We ask you to protect us and to try to stop the bombardments.”