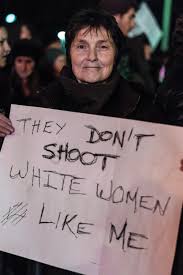 When I think about nonviolence, I don’t usually tie it to sharks. Still, here I was, I watching a documentary about sharks and considering the intricacies of the philosophy and the innate privilege that comes with it.

Compared to axe-murders in the movie Jaws, sharks are representative of any unpredictable and life-threatening attack we may face in our lives. Sharks bring out our true colours, and our gut reactions are on display to the imminent danger. When a shark attacks a person in the ocean, what is a normal human reaction to this attack?

In psychology, our brains react in three ways: fight, flight, or freeze. Whenever we perceive a threat, our bodies make a heroic and rapid response to this threat. Therefore sometimes a reaction is not meant to be violent, sometimes a person is scared enough that they cannot rationalize their responses, and their body kicks into auto-pilot.

This analysis is by no means an invitation to use violent means; it is an invitation to look deeper into why people appear to be acting contrary to their morals of nonviolence. Why do people tend to question oppressed populations’ means for resistance instead of questioning the systemic oppression they suffer?

I need you to ask yourself the following questions:

If all the answers are no, congratulations, you are privileged enough that your life has been given more value than others. Others who wake up every day praying not to be killed just because of how they look, where they come from, or what they believe. Others who pray that their kids come home from school alive.

Some people live under continuous threat as long as they can remember. Some people haven’t lived a life outside of war, and they don’t know anything else but fear.

Living under constant threat causes several physiological and psychological effects. First, your physical health is compromised, where fear weakens our immune system and can cause cardiovascular damage, gastrointestinal problems, among other issues. Second, your memory is affected.  Fear can harm the formation of long-term memories and cause damage to certain parts of the brain. This can make it more difficult to regulate fear and can leave a person anxious most of the time. Third, constant threat disrupts brain processing and reactivity. Being scared can reduce your ability to regulate emotions, understand non-verbal cues and other information, harming our decision-making process and leading to inappropriate reactions. Lastly, our mental health suffers.  Consequences of long-term fear can include fatigue, clinical depression and PSTD.

Unless you are walking in the same shoes as an oppressed person, you are speaking about nonviolence from a place of privilege and from the side of the oppressor.