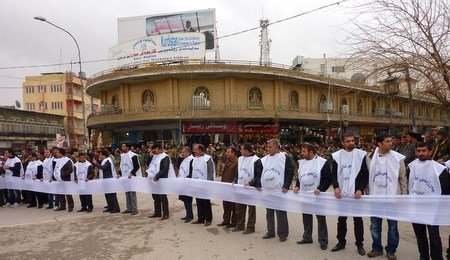 We are learning about the fluid nature of the White Group.  They have a network of members, who
have been able to think quickly, act decisively, assess the situation, and
adjust accordingly.

After many conversations following the incident on Saturday,
February 26, which resulted in injuries and death, we decided to make the
following points regarding the future activities of the White Group:

1. After the shooting,
the Peshmerga [military] forces that were surrounding the demonstration mixed
with the people and the people welcomed them by clapping.  The work of the peace wall initially was
to stop the interaction between the Peshmerga forces and the people.  Following the mix of forces and people
in this good way, it was determined that the role of the peace wall was
finished.  For this reason, the
White Group is no longer necessary.  However, at any time the demonstrators feel the need for the
White Group, we are ready as a group to re-establish the wall.

2. We will work to
make pressure on the courts to stop the arrest of people without court orders
and we will investigate those people who have made arrests without court
orders.

4. We will prepare
daily reports about activities in Suleimaniya city and send them out
internationally.

5. We will follow up
and document all the people who have been arrested and disappeared as well as
visit jails, police and Asaish [Kurdish secret police].

6. We will collect
videos and photos of the demonstrations to keep as a record and to preserve the
truth.

7. We will bring in
international and independent investigators and include them in the team of
local investigators.

On 1 March 2011, the demonstrators officially requested that
the White Group return and re-establish the peace wall.  This request was honored beginning on 2
March 2011 and CPT was invited to join members of the group