IRAQ: “You broke the square, but you can’t break us.” Day 61 of Demonstrations in Suleimaniya Iraq

CPTnet
19 April 2011
IRAQ: “You broke the square, but you can’t break
us.”  Day 61 of Demonstrations
in Suleimaniya Iraq

A new song was playing on Iraqi Kurdistan radio yesterday,
18 April, 2011, which included the lines, “Don’t kill this
generation” and “don’t kill the future.”  While the song played, guns were
blasting and tear gas filled the streets in both Suleimaniya and the KRG
capital city, Hawler (Erbil).

Day 61 of Suleimaniya’s daily demonstrations
against corruption in Iraqi Kurdistan started early this morning.  The CPT team arrived at 11:00.  Music was playing from the stage and
small groups of people were gathering.  Two CPTers decided to use the
quiet time to grab a cup of coffee and juice in a cafe next to the square.
A few of the demonstration
organizers were doing the same.

Meanwhile armed soldiers, the anti-terrorism unit, and
police were positioning themselves around the square., with guns, tear gas,
water

When the two CPTers and organizers left the cafe, a
group of about twenty young men were talking about confronting the
soldiers and police.  Some were
talking about throwing rocks.  Others told us them that soldiers would throw the
first round of rocks to provoke a fight.  Still others told them  that the government pays some of these young men to throw the
first stones in order to provoke an escalation of violence.  The organizers and CPTers gave an
impromptu workshop on nonviolence.  Some of the young men decided to stay in the square.  Others were ready to confront the
soldiers.  One young man said he
needed the money.

The speakers gathered around the stage.  After hearing the announcement that a
thousand people had taken to the streets in Hawler, where government repression
is much worse, the Suleimaniya crowd cheered.

Next, news came to the square that the Suleimaniya
University students were sitting in the street.  For the second
day, a ring of soldiers prevented them form entering the square.  A crowd gathered on one of the streets
exiting the northeast corner of the square.

Then the mayhem began, with the forces launching tear gas.  The people who were closest to it came
running back towards the square with swollen eyes and faces.  Some could not breath.  Ambulances were nearby and ready to
treat them.  News came that the
soldiers were moving
closer to the square.  The stench
of the tear gas permeated the streets.  Demonstrators set up barricades on the street and began
burning tires in order to keep the soldiers from breaking into the square.

The sound of gunfire was prolonged and getting closer to the
square.  Shops along the street
began to close down.  Pedestrians
ran towards the square to get away from the worst of the tear gas and the
shooting.  The team made
contact with the U.S. Consulate by phone and stayed in contact throughout the
day.

The organizers appealed to the people to stay in the
square and to remain nonviolent.  Most
of the people listened.  Then the
shooting began on the other side of the square and soldiers  set up in sniper positions on rooftops.  Nobody knew where to go; the shooting
was coming from all

sides.  People
crouched down behind stone walls.  Others
began breaking up huge blocks of cement to make baseball-sized rocks.  The organizers appealed to the people to
sit down.  Many did and all the
while shooting was going on from all sides.  The U.S. consulate representative could hear the shooting
over the phone and said consulate personnel were in
contact with the highest level of KRG authority.  Nobody seemed to know who was giving the orders to shoot.

Organizers called  for the demonstration to end.  Many people, including the CPTers, left although they had
difficulty finding a safe exit.  At
6:00 p.m., the team received a report that approximately 500 to 700 people
were still in the square.  The soldiers and police came in with guns, batons,  and tear gas, injuring eighty-one badly enough that they had
to be taken to the hospital .  The
armed forces set the stage on fire and burned down all the art displays set up
on the wall in the back of the square.

At 9:00 p.m., 200 young people went back to the square and
were immediately surrounded by armed forces .  The young people chanted, “You broke the square, but
you can’t break us.”  The
Suleimaniya University students are planning to demonstrate in front of the
courthouse tomorrow, 19 April, 2011. 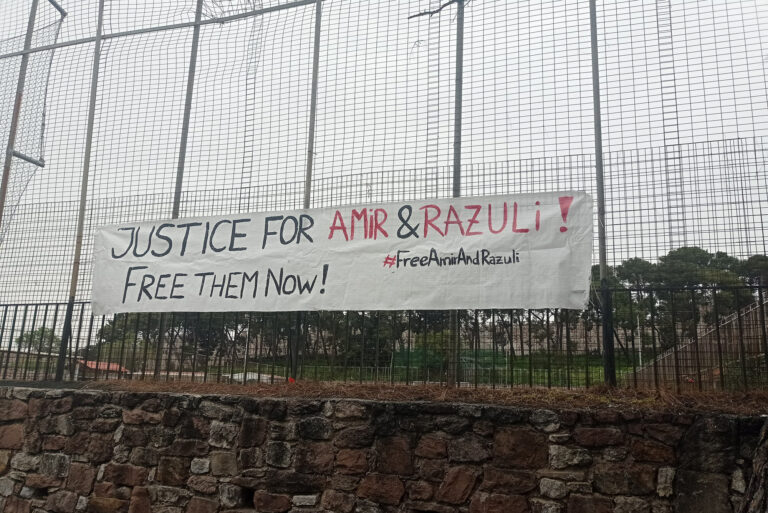