by Bob Holmes, with the CPT Palestine Team

Hebron is a sacred place because of the cave/tomb of Abraham
and Sarah, Rebecca and Isaac, Jacob and Leah.  Today Hebron feels entombed by the Israeli military occupation
and colonization.  It is a Holy
Saturday that has lasted over forty-five years.  No resurrection in sight—but somehow the winter of all hopes
and dreams bears the seeds of a, maybe far off, spring of justice and freedom.  I offer two stories of occupation: one
of oppression, one of hope.

Ten days ago, dozens of Israeli settlers seized and occupied
a three-story house in a Palestinian neighbourhood 100 meters from the tomb of
the Matriarchs and Patriarchs.  The
Israeli soldiers and police immediately declared the street a closed military
area, forcing Palestinians to detour, even the children attending the school
next door.  The settlers claimed to
have gained legal title to the building through a circuitous route but the
Israeli military, which controls all civil administration in the occupied area
of Hebron, declared it “a provocation” and ordered an evacuation.  The situation became very political
with Prime Minister Netanyahu and several Knesset members supporting the new
occupiers.  After seven days, the
settlers were evacuated by the Israeli military.  A group of angry settlers, accompanied by soldiers, walked
through a Palestinian neighbourhood, breaking windows in cars and homes.  Today, a group of settlers are encamped
in front of the formerly occupied house, but the street is now open to
Palestinians. 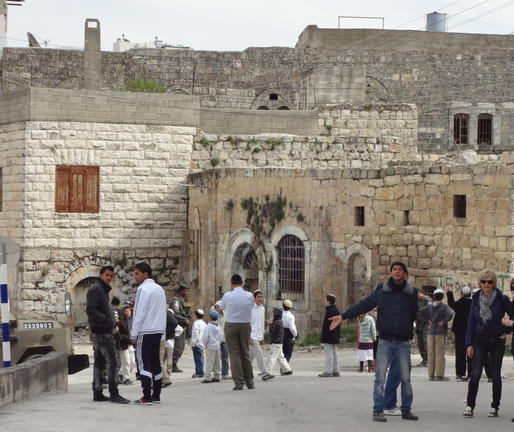 On Palm Sunday, a group of about twenty-five Palestinians
and five internationals responded with a re-occupation of a building from which
the Israeli military had forcibly evicted Palestinians several years ago for
security reasons— for the security of settlers living in a settlement
nearby.  The military reaction to
this re-occupation was much different from its reaction to the settlers’
occupation four days earlier.  Within
an hour, the Israeli military cleared the plaza in front of the building,
forcing all Palestinians out of the immediate area and barricading the four
streets feeding into the plaza.  They
then physically pulled, pushed, or carried out all the “occupiers”
arresting three, including one international.  Then the soldiers dispersed the crowds gathered at the
barricades with a water cannon spraying foul “skunk” water and throwing
sound bombs.

Neither the Palestinians nor the Jewish Israelis are going
away.  Like in South Africa, the
occupation, colonization and apartheid here cannot last—it must give way
eventually to freedom and equality for all who live in this (un)Holy Land.  I believe it will require international
political and economic pressure to bring about change.  The change of hearts will take much
longer.