Join us this November for the first ever
CPT Americas Convergence in Georgia, USA.   CPTers and supporters from
Turtle Island (North America) to the Southern Cone will gather for five days of
formative events including worship, public protest, fellowship, accompaniment,
and the opportunity for nonviolent direct action Wednesday, 20 November through
Sunday, 24 November 2013.

CPT will partner with the Alterna
Community and former Steering Committee member Anton Flores-Maisonet, based in
LaGrange, GA to participate in an annual public witness and civil disobedience
action at the Stewart Detention Center in Lumpkin.   Stewart, a privately
run prison, is the largest immigrant detention center in the United States. Alterna
and Georgia Detention Watch have long monitored this facility, documenting
violations of human rights and detention standards and organizing vigils to
remember the detainees trapped there as well as Roberto Martínez Medina who
died while in detention at Stewart.

Following the witness in Lumpkin, CPT
will join thousands gathered at the gates of Ft. Benning in Columbus, GA to
call for the closure of the infamous U.S. Army School of the Americas (SOA).
Since 1946, this “School of Assassins” has trained over 64,000 Latin American
soldiers in counterinsurgency techniques, psychological warfare, military
intelligence, and interrogation tactics.  SOA graduates have consistently
used their skills to wage a war against their own people, targeting educators,
union organizers, religious workers, student leaders, and others who work for
the rights of the poor.   They have tortured, raped, “disappeared,”
assassinated, and massacred hundreds and thousands of Latin Americans.   Although the official name changed
in 2001 from SOA to WHINSEC (Western Hemisphere Institute for Security
Cooperation), the school under any name is synonymous with torture and
impunity.

Named in the manner of the CPT European
Convergence, which just held its third annual meeting in May, this gathering
will provide an opportunity for CPTers and supporters to connect with one
another, gain strength for the long-haul journey to peace with justice, and to
reaffirm their commitment to life and creative nonviolent resistance in the
face of Empire.

In our efforts to be nimble and
flexible during this time of financial constraint, CPT will forgo its
traditional biennial Peacemaker Congress in favor of expanding our presence at
existing events such as the November gatherings in Georgia. 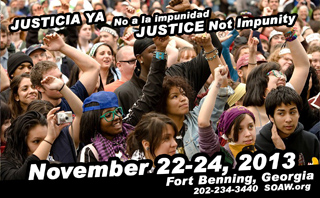